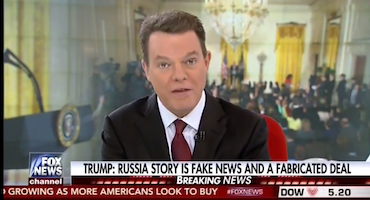 Long-time readers know that we often receive email from people who think they are writing to Fox News. Lately, we have received a lot of mail for and about Shepard Smith. And Fox News viewers are not happy with his criticisms of the president! UPDATED

Earlier, I posted about Smith ripping Donald Trump's press conference today. Smith has been on something of a tear lately. Even if I wasn't up on him, I would have gotten a clue from the barrage of hate mail we've received about him. Examples below. As always, names and other identifying information have been redacted to protect the ignorant. Grammar, spelling and punctuation have been left intact.

Shepard Smith has become such an unhinged leftist that I can no longer watch Fox while he is on. I would guess that I am not the only one feeling this way.
I know you would get some flak for firing your gay anchor, but you as an organization have big enough shoulders to handle it.

I am a loyal Fox News fan and knew Smith was a Democrat from just watching the way he talked about the candidates and that is ok. What he is doing now, trashing Trump with and angry face and agitated behavior is not professional. Brett Bauer and Chris Wallace do not do that.
If Smith doesn't get control of himself I won't watch the news at noon.

We just can't stand Sheppard smith.  He's so very, very liberal.  We turn off fox news and watch another channel.
Sheppard is sharp and snarky--and always against the conservative.
First alerted when he traveled to New Orleans for special reports.   He and Geraldo really hit it off!

I  used to be a huge fan of Sheppard.  He has lately become very biased in his reporting.  Someone should remind him of the Fox News slogan "We report, you decide".  Report being the operative word.

I am a fan of FoxNews and I watch FoxNews just about everyday.  Today I clearly heard Shepard Smith use the Lord's name in vain.  Didn't Bob Beckel get time off for using the F word and Ralph Peters get time off for calling Obama 'a total pxssy' on live television?

Shepard Smith should be given at the very least time off!

This one was dated January 16, 2017 and I'm not sure what incident the writer refers to.

Shep, I record your show every day  and have always  favored your Fox Report. I was very disappointed when you left the 7 pmtime slot.
However, I heard your comments about the CNN reporter and you are wrong.  That reporter should have respected the President Elect of the United States.  If he was a professional, he would never insist on being heard in the manner he did.  This is the press conference host privilege .
To call on whoever he wants to.  I have sensed a liberal bias in your attitude for a while now.  Sometimes your attitude and facial expressions appear to be bitter. You used to be so cute, funny, and loving ; As well as a great journalist.  Your show had that special charisma. What happened to the old
Shep Smith?
The reporter or his news organization did report an erroneous story.
Sincerely from a retired journalist and public relations professional.

UPDATE: We got another batch.

Jacob Mulneix commented 2018-01-23 15:23:41 -0500 · Flag
I HAVE NO PROBLEM WITH HIS OPINIONS BUT I REFUSE TO WATCH THIS SHOW ON FOX BECAUSE HE IS CLEARLY A LIBTARD. LIKE I SAID ALL ENTILTED TO FREE SPEECH SO I JUST WONT WATCH HIS SHOW THE SAME WAY I REFUSE TO WATCH NFL FOOTBALL AFTER WATCHING FOR 25 YEARS EVERY SUNDAY. GO TO CNN SHEP THEY’LL LOVE YOU

1. I think he’s a conservative and/or libertarian. He’s got scruples and is not a Trumper.

2. He probably gets paid a lot at Fox, probably more than he’d get elsewhere.

3. He’s Fox’s go-to guy for breaking news. They don’t really have anyone else to anchor it. He probably would not be that kind of star or have the same kind of autonomy at another network.

Abby, stick with Trump approved “Fox & Friends”. Today they’ve gone to great lengths to whitewash his presser. No wonder why he praises them publicly. Some of Trump’s favorite ass kissers.

publius anon commented 2017-02-17 10:32:32 -0500 · Flag
How dare he criticize mein fuhrer, someone get the gestapo on Shep right away amIright? These right wing snowflakes sure can’t handle anything not in their echo chambers. If you need to be constantly validated in your beliefs you don’t have to worry about anything obfuscating your world view over at breitbart, enjoy your propaganda.

David Lindsay commented 2017-02-17 10:19:24 -0500 · Flag
Abby, Shepherd Smith probably already has his bags packed. Walking away from Faux will be as satisfying for Shepherd as it was for Rhett Butler walking out on Scarlet O’Hara.

Abby La Reno commented 2017-02-17 08:59:25 -0500 · Flag
Dump Shep Smith. He is the one unhinged, not Donald Trump. Maybe Mika and Joe will take him at their table. They are trying desperately to have the President impeached and She would LOVE to help!

If you get bored today do what I just did. Search #FoxNews on Twitter and count all the Fox fanboys and fangirls raging that Shep must go and is a member of the fake news cabal Trump keeps raging against.

David Lindsay commented 2017-02-17 07:04:23 -0500 · Flag
EOF, I can see an inability to overcome seniority/loyalty issues vs. won’t toe the party line at most normal companies. It’ll happen eventually because it’s Faux. Maybe they won’t let him go because Roger Ailes has been playing grabass with Shepherd too and they don’t want that nugget of information out there.

One, how he lasts on the network because I’ve been reading raging Fox fan tweets against Shep for ages.

Then there’s the puzzle why he didn’t run off to another network. Especially after he got demoted to a non prime time slot.