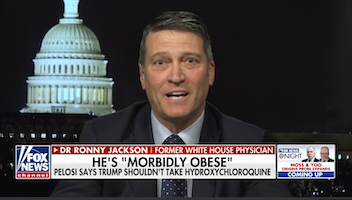 Former White House physician Ronny Jackson argued that Donald Trump’s preventive use of hydroxychloroquine is the “responsible thing to do right now” and claimed that people who “don’t have a problem” with Secret Service protection should not have a problem with him using the drug.

Remember Jackson? He’s the former White House physician who gave an over-the-top glowing medical report on Trump’s health in 2018, was subsequently nominated as secretary of Veterans Affairs, but withdrew “amid allegations of professional misconduct, including drinking on the job and overprescribing medication,” as The Texas Tribune put it. The Tribune also noted that he called the accusations “completely false and fabricated."

That Ronny Jackson visited Fox News @ Night last night and talked up Trump’s use of hydroxychloroquine not unlike the way he slobbered over Trump’s health.

Jackson, who is now running for Congress, began by attacking Rep. Nancy Pelosi after she said she would rather Trump not take “something that has not been approved by the scientists, especially in his age group and in his, shall we say, weight group, what is morbidly obese, they say.”

“Nancy Pelosi should stick to her full time job which is driving this country into the ground,” Jackson said. He continued by saying it’s between Trump and his physician as to whether or not he should be taking hydroxychloroquine.

Which is odd, since Dr. William Conley, Trump’s physician very noticeably did not say he prescribed the drug for Trump. Yet, Jackson said he had discussed the matter with Conley earlier in the day.

JACKSON: I know the president well, I know his medical history well, obviously, I spoke to his doctor at length at the White House today. I was up there most of the day today and I spoke to him. And he’s taking this prophylactically.

It would not surprise me if it turns out Jackson wrote Trump’s hydroxychloroquine prescription.

JACKSON: And you know it makes perfect sense based on what’s going on. You know, he’s the leader of the free world, he is our commander in chief, and if you don’t have a problem with our president being driven around in an armored vehicle and flown around in a secure environment all the time, surrounded by multiple people with weapons to protect him, you shouldn’t have a problem with him taking this drug prophylactically. It’s the responsible thing to do right now for the president. And you know, he’s leading from the front.

There’s a huge difference between Secret Service protection and taking an experimental drug. But if anchor Shannon Bream realized that, she kept it to herself. She merely asked her next guest about "critics quick to say [Trump] shouldn't even be publicly talking about it if he's actually doing it."

That guest, Dr. Charles Camosy, basically dodged the issue by sarcastically asking if it's "possible for us to just let science take this where it's gonna go." Then he launched a Fox-friendly attack on others on TV he claimed are "almost gleeful that this doesn't seem to be working" and argued we should wait for the results of a NIH study. Camosy said nothing about Trump and Jackson not waiting for the science before touting the drug. Which was Pelosi's point at the start of the discussion.

What’s worse is that while hydroxychloroquine has questionable benefits and serious risks, Jackson was promoting it as some kind of safety measure to Fox’s older viewership, in the middle of the pandemic.

You can watch Jackson below, from the May 18, 2020 Fox News @ Night. Underneath are the comments of Dr. Alvarez on the May 18 Special Report, which were virtually ignored.

He also wants the White House physician to explain what's changed since studies have shown no benefits. pic.twitter.com/QAxYVTM1kG

John Vreeland commented 2020-05-21 13:18:54 -0400 · Flag
It’s just like Secret-Service protection, if the service were protecting someone else instead of you and were likely to randomly shoot people accidentally.

Eyes On Fox commented 2020-05-20 13:51:56 -0400 · Flag
What Truman said. I recall Dr. Jackass’ ridiculous public release of Supreme Leader’s physical. I just assumed Trump had arm twisted him into sighing a White House press release. Now I realize Dr. Jackass is mentally ill – suffering from MAGA on the brain. As proved by the MAGAt immediately running for Congress, he’ll put politics before his patients’ health.

I read a personal diary yesterday of a person suffering from an autoimmune disease. She’s stressed to the max counting down to her last hydroxychloroquine pill. It’s bad enough Trump’s FDA caved to open up hydroxychloroquine’s use by people with COVID-19. But now if every Tom, Dick and Donnie (yes, redundant with dick) is going to pop these pills out of a Pez dispenser people with real need are going to find empty shelves at their local pharmacy. Cleaned out by hoarders like toilet paper (except I can wipe my butt with a corn cob).

I also recently read that because of Trump and his MAGA cult over hyping hydroxychloroquine its excessive research is siphoning vital funds from other areas of drug research.