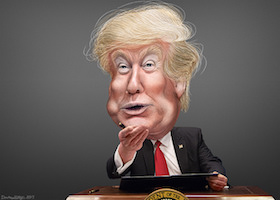 Rebecca Diamond, a former Fox News and Fox Business host who has accused Bill O’Reilly of sexual harassment, has responded on Twitter to Donald Trump after he publicly sided with O’Reilly during what has become a massive sexual harassment scandal.

The New York Times bombshell that has since caused dozens of advertisers to flee The O’Reilly Factor included the case of Rebecca Gomez Diamond who, according to the Times, had presented recorded conversations with O’Reilly when she presented her harassment case. Although the exact amount of her payout is unknown, the Times reported that O’Reilly paid the settlement himself. Diamond was one of six women discussed in the article, five of whom received settlements.

Yesterday, Trump – who has been caught on video boasting about assaulting women and grabbing them "by the p***y" – offered up his support for O’Reilly: “I think he shouldn’t have settled … I don’t think Bill did anything wrong,” Trump told The New York Times. As attorney Lisa Bloom, who represents an O’Reilly accuser, noted, Trump didn’t say he thought O’Reilly didn’t harass anyone, just that O’Reilly had not done “anything wrong.”

Diamond is bound by a confidentiality agreement. But she had some strong words for Trump on Twitter yesterday. Check them out below:

@POTUS President Trump, the women were forced to settle, not the other way around, because of employment agreements prohibiting court trials

@POTUS Fox has publicly acknowledged it requires employment agreements, which require mediation and prevent going to court. Their choice

@POTUS If you don't believe in settlements, get rid of forced mediation employment agreements and women won't have to settle.

@POTUS President Trump, I have personally met and interviewed three of your children several times while I was a host at Fox Business.

@POTUS I'm saddened reading your comments. Truly disappointed and vilified all over again. Such comments tell women they won't be believed

Jane S commented 2017-04-07 04:54:15 -0400 · Flag
Rebecca Gomez Diamond, you go, girl. I thought she was great when she was on Fox Biz and I was puzzled that they just pushed her out to pasture when the show she co-hosted was canceled. I think maybe I know now why that happened.

Somebody should pick her up. She’s not wildly right wing, and she’s a livel and