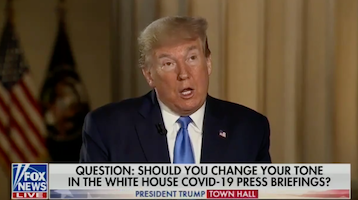 As the U.S. COVID-19 death toll approached 70,000, Donald Trump made himself out as a big victim as he pointed to the statue of Abraham Lincoln towering over him and whined, “I believe I am treated worse.” Fox’s supposedly “utmost professional” journalists, Bret Baier and Martha MacCallum, said nothing to challenge such a preposterous claim.

By setting the virtual town hall at the Lincoln Memorial, clearly Trump and/or Fox was looking to suggest similarities. As my colleague at Crooks and Liars pointed out, Lincoln was assassinated by a Confederate which in my book, is worse treatment. But, hey, maybe this outlandish comparison was the best Team Trump could come up with. After all, this is a guy who is economically enslaving people and he’s fomenting right-wing dreams of another civil war by explicitly approving of and egging on armed defiance of stay-at-home laws.

As Crooks and Liars also noted, Trump's rant was prompted by a caller’s kindly-worded suggestion, prefaced by effusive praise, that he “let go” of behavior “that could be classified as bullying” along with his "rambling" and boastful answers that don't directly answer questions at his press briefings.Trump responded by whining about his "worse than Lincoln" victimhood, attacking the press and bragging about his awesomeness. In short, it was exactly the kind of behavior the caller complained about. But the two supposedly "straight news" hosts gave him a pass on the whole thing.

Here’s the full transcript of the exchange, via Rev:

CAROLYN PERKINS (CALLER): President Trump, my husband and I thank you, your family and your staff for your great dedication to our country. We pray for you every day. The question I have is about your manner of presentation. Why do you use descriptive words that could be classified as bullying, and why do you not directly answer the questions asked by the press, but instead speak of past successes and generally ramble? The U.S.A. needs you. Please let go of those behaviors that are turning people away from you. Please hold onto your wonderful attributes that make you our great leader and let go of other characteristics that do not serve you.

TRUMP: Good. I think I like that question. I’m not sure, but I think I like that question. I appreciate it. I appreciate the prayers too very much. Look, I am greeted with a hostile press, the likes of which no President has ever seen. The closest would be that gentleman right up there. They always said, Lincoln, nobody had got treated worse than Lincoln. I believe I am treated worse.

You’re there, you see those press conferences. They come at me with questions that are disgraceful, to be honest, disgraceful, their manner of presentation and their words. And I feel that if I was kind to them, I’d be walked off the stage. I mean, they come at you with the most horrible, horrendous biased questions and you see it. 94 or 95% of the press is hostile. And yet, if you look in Florida today, we had hundreds and hundreds of boats going up and down the Intracoastal, Trump, Trump. We have tremendous support, but the media, they might as well be in the Democrat party.

And why? I don’t know. We fixed our military, we fixed the Vet. If you look at the VA, you take a look at what’s going on with our vets. They have choice now and we have accountability. We’re able to get rid of people that don’t treat our vets well. They’ve been trying to do that for 44 years, and because of civil service and the unions, you couldn’t do it. The biggest thing is choice. It’s choice, where if a vet can’t see a doctor quickly they go outside, they get a doctor, they get fixed up, we pay the bill instead of waiting for five weeks, seven weeks.

Look at how well these things are running. We rebuilt our military. We had the greatest tax cut, biggest tax cut in history. All of the things we’ve done, and yet we have a very hostile press. And you understand. Maybe you’re not going to say it or admit it and maybe you shouldn’t, but nobody’s ever seen anything like this. I really appreciate the question and I very much appreciate the sentiment behind the question, but I’m standing up there and instead of asking me a normal question, the level of anger and hatred, I’ll look at them, I’ll say, “What’s your problem? What is your problem?”

I believe we’ve done more than any president in the history of our country in the first three years, three and a half years. I really believe that when you look. Even if you look, space force, space force. Also, take a look at terrorism. al-Baghdadi, we killed him. Soleimani, we killed him. We killed the worst terrorists in the world. We got rid of ISIS. We took over 100% of the Caliphate. When I took it over the Caliphate was all over the place. Obama had …

The hosts for this “virtual town hall,” were hailed by Fox News Senior Vice President Bill Sammon as embodying “ultimate journalistic integrity and professionalism” when he begged the Democratic National Committee to let them host Democratic presidential candidate debates on Fox.

Yet these two “ultimate professionals” said nothing to press Trump on the caller's point, challenge the obvious inappropriateness of his comparison to Lincoln, his anti-American attack on the media or the overall tastelessness of his rant.

Baier responded by changing the subject: “Do you think the election will come down to a referendum on how you handled this crisis?” he asked.

Yesterday, I posted about a former Trump supporter who discovered that “in real life,” Trump is not “the person that Fox News and other media outlets made him out to be.”

You can see a perfect example of Fox’s complicity in the masquerade below, from Fox’s May 3, 2020 virtual town hall, via Crooks and Liars.

Eyes On Fox commented 2020-05-05 10:58:28 -0400 · Flag
At first I thought it unfair of Trump to compare our pandemic to the Civil War when 600,000 Americans died, there were violent draft riots where hundred more died, and Congress was so bitterly divided there was a caning incident.

Yet, during this interview Trump cavalierly predicted 100,000 will die and talked of a potential 5,000,000 could (though his context was he’ll save America from that by reopening, safety be damned 🙄). Given Trump’s level of gross incompetence and his active encouragement of armed neo-Nazi “good people” protesters with his “Liberate” rage tweets who knows. The comparison could be a fair one.

Of course, Lincoln wasn’t a whiny little bitch during the Civil War like Der Furor is now. Not to mention the obvious point there’s that little incident in Ford Theater.