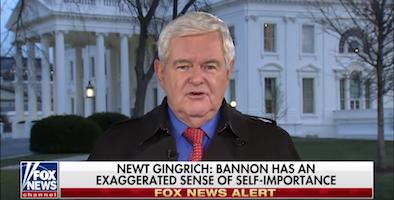 The fact that Your World trotted out Bannon-critic Newt Gingrich to comment on the war of words that erupted today between Donald Trump and Steve Bannon, strongly suggests that Fox News is siding with Team Trump.

In recent months, Gingrich has called Bannon’s war on the Republican establishment “absurd” and “stunningly stupid.” Also, Gingrich’s long-time mistress, now-wife, Callista, has a nice, cushy and image-rehabbing post as the ambassador to the Vatican. So it was no surprise that Gingrich didn’t hold back when he appeared on Fox’s Your World show to discuss Bannon’s bombshell comments, as reported in a new book, in which he called Donald Trump Jr.’s 2016 meeting with Russians “treasonous,” and which were followed by a scathing response from Trump Sr.

GINGRICH: Bannon has an exaggerated sense of self-importance and the news media, of course, builds it up because it’s exactly, in the age of the Kardashians, the kind of nonsense that they love to fill time and space with … as opposed to the largest tax cut in history, or the most deregulation in history, or the best economic growth in more than 10 years.

FACT CHECK: No, this was not the biggest tax cut in history.

GINGRICH: I think that Bannon thinks he’s extraordinarily important, but the fact is Trump had won the nomination without Bannon. Trump would’ve won the presidency without Bannon, and Trump has governed without Bannon, so I think that there’s an exaggerated sense of who Steve is, and I think - remember, this is a guy who got fired. … I think you just have to say it’s noise.

Watch this volley in the Trump/Bannon feud below, from the January 3, 2018 Your World.

Murdoch can call Trump all kinds of names behind his back, but you will never attack Murdoch because you don’t want to lose your appearances on Fox “News” Channel, your old fool.