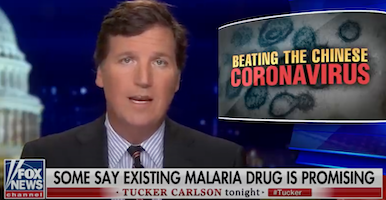 Yesterday, CNN’s Brian Stelter noted that while Tucker Carlson’s ratings are soaring, his advertising revenue is suffering. But the MyPillow company is doing its best to soften the blow.

During his Reliable Sources show yesterday, Stelter discussed calls for Carlson to run for president (you can read my post on the subject here). But first, he said this about Carlson:

STELTER: Move over, Sean Hannity. Tucker Carlson now has the highest-rated show on cable news. Between the pandemic and the protests, cable viewership is up across the board. And Tucker at 8:00 p.m. is benefiting more than Sean at 9:00 p.m. But ratings do not tell the complete story because advertisers have been avoiding Tucker's show for the past couple of years, partly due to liberal pressure campaigns.

So what companies are keeping Tucker's show on the air? Who's sponsoring? The answers are striking. According to iSpot.TV data, nearly 40 percent of Tucker's ads are from a single sponsor, MyPillow. Just to put this in perspective, MyPillow only makes up about 15 percent of Hannity's advertising, and that is still a ton for a single sponsor.

Later, Stelter noted that Carlson has “mostly avoided talking about Trump” which could benefit him as Trump’s popularity craters.

This is something I’ve long noticed. In fact, I’ve long suspected that Carlson is not really a Trump fan and that that is one of the reasons he pushes white nationalism so hard. It’s how Carlson looks like a Trump fan without actually being one. Or, to put it another way, it's another example of Carlson’s deceit.

You can watch the discussion about Carlson’s soaring popularity below, from the July 5, 2020 Reliable Sources.