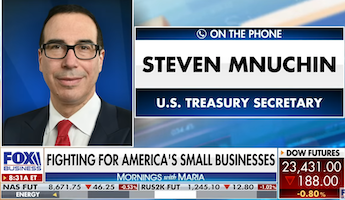 Treasury Secretary Steve Mnuchin suggested Americans ignore CDC advice as well as the raging pandemic and hit the road as he so wishes he could. I’m sure his recommendation has nothing to do with the fact that Donald Trump owns hotels and resorts sitting empty.

Early in the lengthy interview with Fox Business’ Maria Bartiromo today, a lower-third banner read, “FIGHTING FOR AMERICA’S SMALL BUSINESSES.” The lives of American people not so much, it seems.

Mnuchin told Bartiromo that Trump is looking at ways “to stimulate travel” along with other parts of the economy such as restaurants. It just so happens the restaurants in those Trump properties are a key source of income. Just last week, we found out Mnuchin buttered up his boss by renting a luxury suite at Trump’s D.C. hotel for about four months in 2017 – a gift with the added bonus of $33,000 taxpayer dollars for the Secret Service to stay there, too.

“We want people to travel safely, to be able to visit places safely,” Mnuchin said. “So, as the economy opens up, I think you’ll see demand coming back.”

I noticed he said nothing about medical recommendations. And that’s no surprise, given that the federal government’s own Centers for Disease Control and Prevention doesn’t think travel is so safe. The CDC advises, "Travel increases your chances of getting and spreading COVID-19" so we should all “stay home as much as possible, especially if your trip is not essential.”

Mnuchin, on the other hand, wants us to travel the U.S. as much as possible. He urged viewers to hit the road, while indicating he wasn’t going to take that risk, himself. “This is a great time for people to explore America. A lot of people haven’t seen many parts of America. I wish I could get back on the road soon."

As The Daily Beast noted, Bartiromo didn’t say a word to challenge Mnuchin’s advice. But then it’s not all that different from her colleague Ainsley Earhardt talking up air travel during the pandemic as “actually the safest time to fly” and so comfy because all those empty seats mean “you could stretch out a little more … on every flight now.”

You can watch this latest example of the Fox/Trump culture of death below, from the Fox Business Network’s May 4, 2020 Mornings with Maria.

Mnuchin, who always looks like an undead ghoul, is sickening. But the most vomit inducing example of the go out and get sick on my behalf Trumper is Fox News’ own Laura Ingraham. She is by far the most shrill, full-throated shill for the anti-stay at home and Liberate America protest movement there is.

Meanwhile, as Laura asks her MAGA Death Cult followers to risk their lives for Trump’s economy (and reelection hopes) she sits comfortably in the safety of her McLean, Virginia multi-million dollar mansion. You’ll never see her at a Liberate America rally with a bullhorn or sitting elbow to elbow at a Waffle House chumming it up with her redneck listeners.