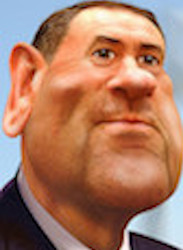 The New York Times noted that Huckabee faces greater obstacles than when his insurgent candidacy was nicknamed the “Huckaboom” during the ’08 race:

Now half a dozen or more declared and likely candidates appeal to social conservatives, and Mr. Huckabee’s party has moved further rightward. He is vulnerable to criticism for positions he once held in favor of the Common Core education standards and a cap-and-trade program to fight global warming.

“It is a completely different environment than 2008, with different issues and with different candidates,” said Bob Vander Plaats, who was chairman of Mr. Huckabee’s 2008 Iowa campaign and is uncommitted this time.

If Huckabee’s campaign has legs, it may well be due to his six years as a Fox News host. From The Times:

Mr. Huckabee’s upset victory in the Iowa caucuses eight years ago, powered by evangelicals and home-school families, has been burnished to a political legend in the state that holds the first nominating contest. Recent polls show Iowa Republicans still put Mr. Huckabee among their top preferences, although he has been surpassed by more prominent party figures including Scott Walker and Jeb Bush.

To an unusual degree, strategists for Mr. Huckabee are counting on his likability – a folksy charm that a national audience got to know during his six years as a Fox News host – to break through the pack of competitors. Mr. Huckabee ranks high in favorability in polls. His campaign aides argue that voters will “come home” to Mr. Huckabee after kicking the tires of the shinier new vehicles in the race.

Previously, Huckabee has explicitly acknowledged that his eponymous Fox News show has helped boost his image.

But he’s far from the only Republican candidate to benefit from Fox News’ special brand of “fair and balanced.” Media Matters counted 804 appearances on 8 Fox News shows during the period January 21, 2013 – April 8, 2015.

Huckabee is also not the only Fox News personality in the presidential arena. Former Fox contributor Dr. Ben Carson announced his candidacy yesterday. Current contributor John Bolton is also mulling over a run.

Anne-claire Souza commented 2015-05-06 13:14:57 -0400 · Flag
America’s Preacher President ,leading the prayer at sun up and sun down, good luck with that Huck ,especially now when so many Americans are seeing the light by leaving the Churches.

Joseph West commented 2015-05-05 19:16:44 -0400 · Flag
Unfortunately, Dave, that’s all beside the point (and, technically, it’s gone Dem in 6 of the last 7 elections; it’s voted Dem in 1988, 1992, 1996, 2000, 2008 and 2012 but GOP only in 2004). The real point is that Iowa is the first major political battleground with the first vote during the year of the Presidential election (courtesy of the Presidential caucus) plus its fairly influential (at least, in the sense of bragging rights; it can also make or break some campaigns since the winner can use the results to boost contributions to their campaigns) GOP Preference “Straw Poll” held the year before the Presidential election.

Plus, most of the recent elections have been pretty close—no more than about a 6% margin of victory. 1996 was pretty much of an outlier. Clinton won over Dole by 10%, but if you add the Perot vote as mostly coming from GOPers, Clinton’s win would be less than 2%. The last time there was a genuine 10% margin of victory was 1988 when Dukakis won by just over 10% (54.71% to Bush the Elder’s 44.5%). Even Reagan’s 1980 win in Iowa was only greater than 10% when compared ONLY to the Carter vote (adding in Independent candidate Anderson’s vote, Reagan’s margin was less than 5%).

If Iowa really didn’t mean that much to the GOP, then why do the candidates spend so much time visiting the state in the year before the caucus? Nor does it explain why the GOP candidates spend so much time there (compared to other similarly sized states, population-wise) during the critical pre-election, post-convention period. In 2012, for instance, Romney and Ryan made a combined 16 visits to Iowa (according to FairVote.org) while Obama and Biden made only 11 visits. Iowa has only 6 electoral votes at stake, but it was the FOURTH most visited state by presidential campaigns behind Ohio (73 visits for 18 EVs), Florida (40 visits for 29 EVs), and Virginia (36 visits for 13 EVs) and was ahead of states like Colorado (23 visits for 9 EVs) and Wisconsin (18 visits for just 10 EVs). (For what it’s worth, the Dems won ALL of those states, in spite of the Romney/Ryan’s combined 132 campaign visits compared to the Obama/Biden’s combined 85 campaign visits.)