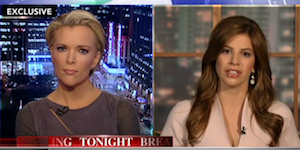 A visibly upset Michelle Fields discussed the very damning evidence of an assault on her by Corey Lewandowski, Donald Trump’s campaign manager, during her appearance on The Kelly File Friday night. UPDATED

Against the backdrop of the general violence at Trump campaign rallies has been the assault on Breitbart reporter Michelle Fields. She’s a former Fox News contributor and still a regular guest on Cashin’ In. I wrote more extensively about the situation in a previous post, but the gist of the matter is that Fields was roughly yanked and bruised as she attempted to ask Trump a question at a rally. She was informed by Washington Post reporter Ben Terris, who was nearby, that it was Lewandowski who did it. Since then, audio and video has emerged to back up this account but Breitbart’s support for her has been weak tea, to say the least.

After Trump accused Fields of making up her allegations, she filed a criminal complaint of assault against Lewandowski.

Fields said, “Trump is trying to say that there’s some sort of conspiracy. We’re talking about Breitbart News and The Washington Post. The idea that we are working together or something is just absurd and I don’t understand how people can believe that.”

Watch it below, from the March 11 The Kelly File.

3/14/16 Update: Fields and Ben Shapiro have resigned from Breitbart.

Bigtoe commented 2016-03-13 21:03:41 -0400 · Flag
Even without the video, she comes across as credible. If the Drumpf campaign does respond with an apology (not likely though) I can only imagine it’ll be rather weak and filled with excuses rather than sincerity.