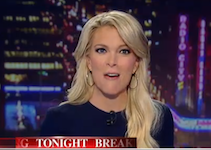 Megyn Kelly cited – wait for it – Ann Coulter as a reason we should all think that Donald Trump may be right about those bad, terrible Mexicans coming over the border. But Kelly cut off and then brushed aside Geraldo Rivera as he cited statistics showing otherwise.

Most of the discussion in The Kelly File segment about Trump centered on NBC’s decision to dump him over his derogatory comments about Mexican immigrants being rapists, druggies and criminals.

Rivera began by saying, “First of all, I’m filled with respect and admiration for Donald Trump.” Then he slathered on praise for Trump’s buildings and all he’s supposedly done for New York. Just to let everybody know that even though Rivera thinks Trump’s remarks “caused such pain and anguish in the Latino community, such rage,” Trump is still among friends on Fox.

Of course, nobody mentioned Trump’s utterly bogus and discredited birtherism.

Rivera had called Trump – we even saw a photo of Geraldo talking on the phone – to urge him to apologize. His statement was “way too broad, it was crude in many ways,” Rivera said, and he wanted Trump to understand how he had “hurt many good, hard-working people.”

Alas, Rivera's efforts were to no avail.

But Kelly suggested Trump has nothing to apologize for.

KELLY: Ann Coulter has got a whole book out right now that makes this point. Now, granted, she’s not running for president. …But she cites data that does support the fact that some, obviously, immigrants who come across the borders do turn out to be criminals.

Rivera said that undocumented immigrants “commit crimes at a lower rate than the citizen population of the United States.” He is correct.

But “independent” Kelly apparently looked no further than Coulter for her information. Nor did Kelly want to look any further. Rather than probe Rivera for more details, Kelly interrupted to say, “Someplace Ann Coulter got a shiver down her spine and I’m getting an email soon asking her to come on soon and debate you.”

Then Kelly changed the subject to attack NBC for keeping Brian Williams and not Trump.

NBC may have dumped Donald Trump and Macy’s may soon follow.

But I think it’s pretty clear that Trump will always have Fox News.

Watch it below, from the June 29 The Kelly File.

Steve St John commented 2015-06-30 22:21:27 -0400 · Flag
I would have thought Fox wouldn’t have the nerve to say anything about Brian Williams, considering the similar situation with O’Reilly, but then I remembered that the right wing has no shame.

Antoinette commented 2015-06-30 14:22:37 -0400 · Flag
Macy’s has a Trumpster problem, and based on these statistics, they may have to part ways
http://www.nielsen.com/us/en/insights/news/2015/hispanic-consumers-are-the-foundation-for-beauty-category-sales.html

Antoinette commented 2015-06-30 14:10:04 -0400 · Flag
Trumpster’s troubles are not over. More of his business partners will flee, and an increasing number of conservative organizations are voicing concern over him.

Tie Trumpster to RNC leader Reince Priebus. Remind the masses daily publicly through radio, television and publications of Trumpster’s relationship with the RNC.

Based on what he’s doing to your party, you can’t blame liberals. Thanks to him, the RNC’s brand will be permanently damaged.

NewsHounds posted about Megyn Kelly Thinks Donald Trump Has A Point About Those Bad Mexicans on NewsHounds' Facebook page 2015-06-30 09:00:12 -0400
Trump may have lost NBC and Univision but he'll always have Fox News!