Megyn Kelly Sure Seems Like She Wants To Replace Shepard Smith 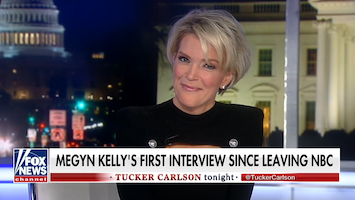 Megyn Kelly spent nearly 21 minutes with Tucker Carlson showing off her conservative journalism bona fides, attacking the rest of the media for bias and overlooking the bias on Fox News.

Naturally, Carlson was eager for details from Kelly's time at NBC about how it covered up sexual misconduct within its own organization and why that may have been the reason the network killed the Harvey Weinstein story, now buzzing from Ronan Farrow’s new book Catch and Kill.

Never mind that when Roger Ailes died, Carlson lionized him without uttering a word about the women he victimized.

But Carlson and Kelly spent most of the time attacking the rest of the media.

It started with Tucker Carlson playing a clip of the Anderson Cooper debate question to Joe Biden about his son that Fox has been obsessing over as evidence of some kind of egregious bias. The "crime?" Cooper said Hunter Biden had been “falsely accused” of wrongdoing and that there’s “no evidence of wrongdoing” by either Joe or Hunter Biden.

Carlson and Kelly snickered over it, with Kelly incorrectly describing the question as, “It’s clear you did nothing wrong, but did you do anything wrong?” In fact, the rest of Coope's question was, “Having said that, on Sunday, you announced that if you're president, no one in your family or associated with you will be involved in any foreign businesses. My question is, if it's not okay for a president's family to be involved in foreign businesses, why was it okay for your son when you were vice president?”

Kelly also attacked Hunter Biden for taking the job in Ukraine. You’ll probably be shocked to know she said not a word about the Trump family corruption, nor even the reason we’re talking about Hunter Biden – because Trump tried to extort the president of Ukraine to get dirt on the Bidens - which just happens to be the subject of the impeachment inquiry.

“Is that corrupt?” Kelly asked, about Hunter Biden’s job. “You could make a very strong argument that it is,” she said dramatically. She gently suggested Cooper “could have reworded that,” perhaps not wanting to burn any bridges at CNN.

“But this is part of a larger tapestry here,” Carlson said with a smug smile. “And it adds up to, basically, partisan interference in an election.” Which is beyond rich coming from anyone at Fox.“You have journalists who feel that their first obligation is to help a candidate or to hurt another candidate. That’s not journalism.”

This from the network that brought you the Seth Rich smears, for which it has still not apologized and whose prime time host took credit for killing the Russia “witch hunt.”

Kelly ignored how Fox News has all but turned into an extension of the White House as she said an anchor’s subjective judgment “doesn’t belong, in my view, in a debate question.” Apparently, everywhere else, she’s fine with it.

In the final part of the discussion, she attacked the rest of the media for its “hyper-focus” on impeachment. “From the day [Trump] took office, it was the 25th Amendment; the Emoluments clause; Russia, Russia, Russia; obstruction of justice - all of those things!” she exclaimed.

“If everything is an 11, nothing is an 11,” Kelly continued. “So now, they may have actually stumbled on an 11 [with the Ukraine scandal] … but no one’s paying as much attention as they otherwise would have if we hadn’t been told from the beginning that he needs to be bounced out of office. … I don’t know whether they’re convincing anyone who is on the fence or in the middle,” Kelly said. To which Carlson responded, “at all!”

FACT CHECK: Fox News’ own poll found that support for impeachment has increased dramatically since July.

“I just don’t think that the mainstream media has any connection to flyover country,” opined the woman who just got $69 million from NBC, lives on the upper west side of Manhattan and paddleboards in the Bahamas. I’d love to know the last time Megsy spent any significant time hanging with the locals in rural South Dakota, Kansas or Arkansas.

But she may be willing to play the part again. Although Kelly said she left Fox to spend time with her family and talked about how important that is, she also said she plans to “get back on that horse soon ‘cause this has been fun.” She quickly added, “right now, I’m still enjoying my day-to-day life with my family.”

Fox News issued a statement saying that Kelly’s appearance was “coordinated weeks ago and is a one-time occurrence. Any future programming changes we are considering do not involve her.”

Watch Kelly look a lot like she’d love to replace Shepard Smith below, from the October 16, 2019 Tucker Carlson Tonight.

Kelly has nowhere else to go but Fox News. Why would even CNN want her? Her inflated ego will demand way too much money when all she has to offer is upskirt shots of a middle-aged bleached blonde. I’m sure Fox News will offer her the same old glass topped desk she had before.