Megyn Kelly Gushes To Romney And Ryan: You Look Like A Presidential Team! 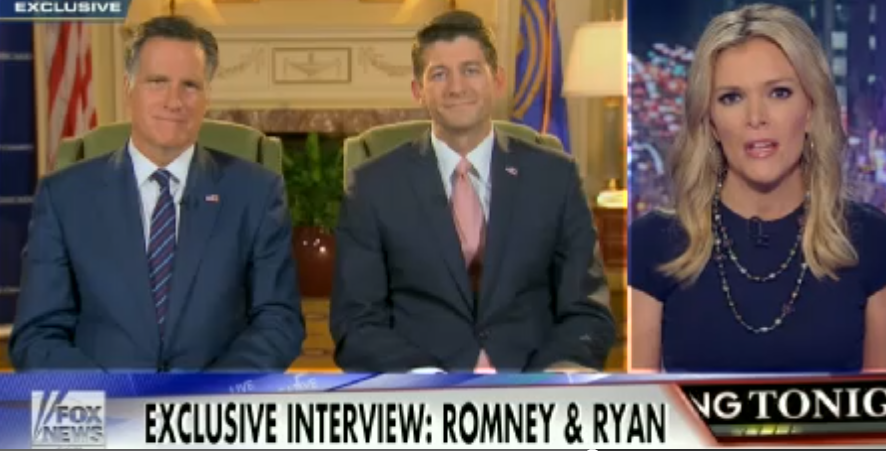 The nearly 11-minute interview was little more than an Obama-hating lovefest between “down-the-middle” Kelly and the two former Republican candidates. It featured such questions as, “You said this week in an earlier interview that you believe that President Obama has made, quote, more  mistakes than you predicted. How so?”

Quite a contrast to her interview with, say, ObamaCare architect Ezekiel Emanuel.

Kelly’s point was that there are problems holding the Republican party back – problems which Ryan’s new book just happens to address. But her unstated message was that Romney and Ryan should be the president and vice president.

Kelly ended by prodding her guests to attack Obama and Attorney General Eric Holder by “just asking” if there had been an “excessive response” by the federal government in Ferguson.

In a word, nope. Romney said “It’s appropriate to have that level of involvement and I think people expect and can believe that there will be the full oversight of our justice system in this setting and the right conclusion will occur.” Ryan agreed.

Watch the interview below for yet another example of how Fox works as the communications arm of the GOP.

They might look presidential to you Meghan, but, there words betray how they would treat the folks after being elected.

Richard Santalone commented 2014-08-22 09:38:33 -0400 · Flag
RobMe — er, I mean — Romney is seriously considering running for POTUS AGAIN! Mark my words: Heaven help us working class Americans if Romney gets into the White House, because given his PFC (Privileged Fascist Chickenhawk) history, one of the first things a President Romney will do is REINSTATE THE DRAFT — I GUARANTEE IT!

Barbie Blackroots should have removed her face from Ryan’s crotch long enough to ask: Why do you want to destroy Medicare and Social Security?

YOUR GUYS F***ING LOST, DAMMIT!
GET OVER IT!