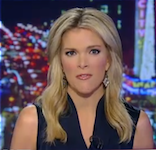 On November 6th, Megyn Kelly unequivocally stated that President Obama has the authority to use “prosecutorial discretion” in enforcing immigration laws. But on Friday, November 14th, Kelly developed a sudden case of amnesia and asked indignantly, "How can that be allowed?"

Previously, Megyn Kelly specifically stated that President Obama has the ability to take executive action on immigration. From Media Matters:

On the November 6 edition of The Kelly File, Kelly explained to her guest, Sen. Jeff Sessions (R-AL), that “the president does have prosecutorial discretion when it comes to immigration, the Supreme Court made that clear as recently as 2012.”

But on Friday, Kelly sang quite a different tune without explanation. All of a sudden Obama’s executive order was likely to be a dangerous “overreach.” Kelly made no challenge when her guest, law professor Jonathan Turley, said it looks like President Obama “will violate separation of powers” if he goes ahead with his immigration order. Or when Turley accused Obama of "tearing at the very fabric of the Constitution."

Now Kelly was full of horror at the thought of Obama exercising the power she announced that he had, just one week before. With hammy outrage, she now said, “The people’s representatives,” i.e. Congress, “get a vote! Their vote was no! And now (Obama’s) just so irritated, he said, ‘Well too bad. I’m gonna do it on my own.’ How can that be? How can that be allowed?”

How quickly she forgot, eh?

will samson commented 2015-03-23 04:49:24 -0400 · Flag
It is worth looking at how undocumented immigrant population correlates to median income- That isn’t necessarily causal. Could be that undocumented immigrants just tend to move to wealthier places. But, it certainly seems to debunk the position of the right on the issue.
From: https://www.youtube.com/watch?v=0kGbWH4VqSk

T Dog commented 2014-11-17 14:42:32 -0500 · Flag
Obama insisted publicly that a decision to shield millions of immigrants from deportation without an act of Congress would amount to nothing less than the dictates of a king, not a president.

T Dog commented 2014-11-17 14:41:15 -0500 · Flag
Funny:
President Obama is ignoring warnings that executive action on immigration would amount to “violating our laws” and would be “very difficult to defend legally.”

Those warnings came not from Republican lawmakers but from Mr. Obama himself.

The far right think that immigration’s their new window to impeach Obama for ‘President while Black," under a supposedly official guise on paper. Kelly wasn’t on board, so Ailes sent her a memo to get with the program.

T Dog commented 2014-11-17 13:47:26 -0500 · Flag
I think she said that because executive order is a gray area. Yes Obama can do it, but be prepared for the consequences. I believe it was meant for small things that effect a few people. So you don’t have to go to congress for every little thing. Impeachment is a process that was added to make sure the president doesn’t overreach on the executive orders. Who decides if president is overreaching? The house and the senate, which is elected by the people. I think using EO that effects the nation is BS. The people have a voice and a vote. The Dems got there ass handed to them in the midterms. Obama new why he lost the senate. The GOP was put in power to do one thing, to stop Obama. In the end, I think those A hole republicans will blow it. If this happens, the dump ass GOP can forget about ever getting elected again. But my conservative friends think it will be the other way around, amnesty and obamacare is in full force and that will bring back the GOP. I call BS on that. The GOP had their chance.

MoFoIT commented 2014-11-17 11:05:22 -0500 · Flag
It is worth looking at how undocumented immigrant population correlates to median income- http://politicsthatwork.com/graphs/undocumented-immigrants-median-income That isn’t necessarily causal. Could be that undocumented immigrants just tend to move to wealthier places. But, it certainly seems to debunk the position of the right on the issue.