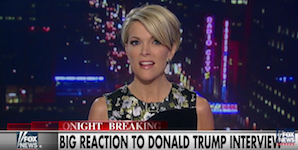 Many people, of all political sides, were less than impressed with Megyn Kelly’s interview with Donald Trump for her FOX Broadcast Network special, Megyn Kelly Presents, Tuesday night. Kelly opened her show last night by attacking their legitimacy as “mainstream media” who are just anti-Trump.

She started off, “So, my interview of Donald Trump earning lots of viewers and lots of reviews last night. It was the second most-watched show on Tuesday, on FOX broadcast, in 2016. For that we thank all of you.”

What she did not mention is it was also the lowest-rated network show in the 18-49 demo.

As The Hollywood Reporter notes, “Updated Nielsen ratings give the program 4.8 million viewers and a 0.8 rating among adults 18-49.” But “NCIS topped the night with a massive 17.6 million viewers and a 2.5 rating in the key demo, easily outpacing The Voice and everything else on broadcast.”

Then came Kelly’s complaints: “However, it also earned the scourge of many in the mainstream media because it was not a take-down of Trump.”

Next, she claimed the critics were biased haters: “Not surprisingly many of these very critics failed to disclose their own bias against Trump, against FOX News or against the GOP.”

Kelly quoted many reviews. She began with James Warren, from Vanity Fair, who described her interview as a “soft-as-a-grape session on the FOX broadcast network.” She sneered, “This is the same man that dismissed the entire Republican party as quote, ‘anti-female.’”

“Erik Wemple, of the Washington Post, has made no secret of his hatred for Trump, calling him a ‘bigot’ and a ‘misogynist,’” Kelly continued. She also noted condemningly that Wemple wanted her to “dismember Donald Trump.”

“Wemple is upset that I did not quote, get personal about what Trump’s behavior has done to my life,” Kelly added. “As if an interview about Trump should be about me.”

Well, Megyn, the big interest in the interview was precisely because of the personal attacks Trump made about you. As Wemple wrote in his response:

As anyone who watched the interview well knows, it was in part about Kelly. After all, she started one segment with these words: “Let’s talk about us.” “Us,” translates to “you” and “ME.” The nub of this blog’s critique is that Kelly pulled punches in this critical segment, failing to present Trump with the full impact of his endless online taunting. In interviews promoting the interview, Kelly has referred to a “dark year” as well as to other nasty fallout. Yet somehow Trump skipped accountability. At one point, Kelly requested, “Set the scene for me, because I know where I was when I was on the receiving end of a lot of those tweets. But I’ve always wondered where you were. I’m picturing a crushed velvet smoking jacket, chaise lounge, slippers.”

Even worse, Kelly ended the special by hawking her forthcoming book and suggesting that she’d give people the real story about Trump’s attacks on her then, after the election.

Kelly also suggested that negative reviews by Hank Stuever, of the Washington Post, and Amy Davidson, of The New Yorker, were mere bias.

To prove them all wrong, Kelly trotted out Fox’s own Howard Kurtz, who often sounds more like a Trump fan than the media critic he is supposed to be, for some totally non-biased (positive) feedback.

Kurtz conceded that a “high-profile interview like this is fair game for all the critics,” but probably not for these critics. “It does bother me when critics who despise Trump, often from the left, just aren’t up front about that and would not have been happy with any interview that didn’t leave him a battered and bloody mess,” Kurtz said.

He then knocked “Slate’s liberal columnist, Isaac Chotiner.” According to Kurtz, Chotiner has said negative things about Trump so, “Of course, he is going to slam any sit-down where you didn’t take a baseball bat to the guy’s head.”

Kelly then played a FOX favorite, “What if it was a Democrat?” card, asking if those same people would want a tough interview by her of Hillary Clinton.

Kurtz thought the question answered itself, then praised Kelly. “Getting [Trump] to express some regret, even used the word ‘mistake,’ as we saw in that clip, it’s something that Trump almost never does. It’s almost like an apology for him.” Kurtz also gushed that despite some awkwardness, she got Trump to share some personal feelings which he is “very loath to do.”

The two justified Kelly’s softballs to Trump by saying the FOX broadcast interview was not supposed to be confrontational or issue-oriented, as an interview on her FOX News show would be.

Kelly capped it all off by quoting a favorable passage from an article by Callum Borchers, of The Washington Post, who covered the response to her interview more than reviewed it.

“And anyone who expected Kelly to shred Trump for his conduct toward her must not have been paying attention to the policy of non-engagement she has followed since his rhetorical assault began last summer. An angry altercation would have made exciting television, but it would have been wildly inconsistent with Kelly’s previous conduct.”

Kelly said that was “exactly right.” She did not mention that Borchers, while willing to give her a pass on this interview, also noted his reservations. “The real test of whether Kelly has actually gone crushed-velvet soft on Trump might be the next interview, not the one we just saw on Fox,” he wrote.

Kurtz justified all the criticism by saying Kelly has now lost the sympathy from Trump’s twitter attacks because she was too cordial in her interview.

I don’t agree. You can be a critic of Kelly’s FOX Network interview with Trump and still be outraged by Trump’s behavior toward her.

Watch it below, from the May 18 The Kelly File.

John McKee commented 2016-05-20 04:19:26 -0400 · Flag
Personally, I despise this woman as thoroughly as I do Hannity, O’Bluster, Ailes and Murdoch. Don’t know why, but the pictures of female guards from Auschwitz being forced to parade before and actually look at heaps of emaciated corpses come to mind.

Their evil deeds go far further and far deeper than anything resembling politics. Jesus, I wish there really were something like ‘hell’ for them to contemplate their horribleness in forever.

Megyn, taken aback says," I don’t know. There would have to be precautions. ".

Trump," We’ve established what kind of a girl you are. Now we are negotiating a price.".

d d commented 2016-05-19 23:00:00 -0400 · Flag
As usual, WaPo’s Wemple nails it. Poor Megyn – she gives the folks a mediocre interview and how does she handle the (very valid) critiques? By tearing out a page from Trump’s playbook to whine about the “media”. Not only has she decided to attack her critics à la the Trumpster, she’s also sounding more and more like the thin-skinned BOR. Watch out, BOR, Megyn is trying to steal your act! LOL!

Matt Ssssjjjkkk commented 2016-05-19 22:50:59 -0400 · Flag
Amazing how anyone who joins FOX becomes a literary superstar. Even Jesse SMARMY Watters has one. Funny, they probably never even read a book prior to joining FOX. I guess it helps when you own a publishing company eh Rupy

As it develops, it looks like she did it to sell a book.