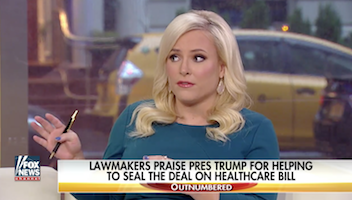 Meghan McCain has decided not to return to Fox News. It does not appear to be due to another engagement.

In a series of tweets yesterday, McCain revealed that she has decided to leave Fox in order to “focus on other things.”

I’m so thankful to @FoxNews for the chance to be on @OutnumberedFNC but I’m leaving to focus on other things, I have no doubt the show will

- continue to do well and wish all my friends and colleagues at the network nothing but success.

McCain has been absent from her chair as cohost of the Outnumbered show since July, when her father, Sen. John McCain, was diagnosed with brain cancer. At the time, she issued a moving statement about her father:

My guess is that McCain did not want to come back to a show devoted to Trump sycophancy, especially when her father has been something of a voice of Republican opposition. But I’m sure her father’s illness had a lot to do with her decision and perhaps she wants to remain closer to her family in Arizona.

Whatever her reasons and despite my criticisms of her, I have long felt that McCain, who seems to have inherited her father’s streak of independence, was capable of much better than she was able to do on Outnumbered.

Best of luck to you, your Dad and your family, Meghan. We look forward to seeing what next steps you take.

David T commented 2017-09-16 15:51:33 -0400 · Flag
She made a good decision to leave Fox. Prior to Fox, she was an ineffective contributor on MSNBC. At Fox, her contributions to Outnumbered would have been more appropriate in the movie “Clueless”. She seems like a good person who should seek a different career path. Her jobs to date reflected her name, which is not a good long-term strategy.