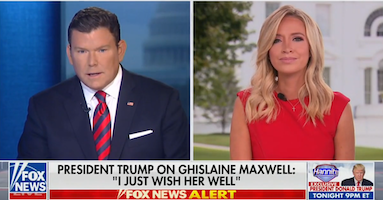 On Tuesday, Trump was asked by a reporter whether he expected Maxwell to publicly name the powerful men who allegedly took part in the sex-trafficking ring Maxwell and Jeffrey Epstein allegedly ran. Trump claimed he hasn’t been “following it too much.” But, he added, “I just wish her well, frankly.”

I can just imagine the 24/7 poutrage that would have erupted on Fox News had President Barack Obama or President Bill Clinton sent good wishes to anyone charged with running a sex-trafficking ring. But, as The Daily Beast noted, Fox pretty much ignored Trump’s shocking remark until yesterday.

During his interview with McEnany yesterday, Fox News’ “serious journalist," Baier feigned the role of tough questioner. In reality, he opened the door for McEnany to spin without challenge.

BAIER: The other day [Trump] was asked about Ghislaine Maxwell, who’s being federally prosecuted for recruiting, grooming, sexually abusing underage girls. He said, “I just wish her well, frankly. I wish her well.” That raises some eyebrows, Kayleigh.

Granted, I can’t think of a single good way to spin Trump’s remark but McEnany’s spin was such obvious BS, it’s a wonder Baier didn’t burst out laughing.

As The Daily Beast also pointed out, Trump “made no mention of Epstein or the circumstances around his death or custody in prison” when he made his comment about Maxwell.

But Baier didn’t even point out that wishing an alleged sex-trafficker well is an extremely odd, not to mention extremely dubious, way of looking out for her victims.

Instead, Baier expressed incredulity without challenge. He merely asked whether McEnany had spoken to Trump about it. When she said she had, he added, “A lot of people were saying it just seemed - strange answer.”

So McEnany continued with more nonsense.

MCENANY: Bret, this president is the president that banned Jeffrey Epstein from coming to Mar-a-Lago. This president was always on top of this, ahead of this, banning this man from his property, long before this case was played out in a court of law.

In fact, it’s much more likely Trump will have some ‘splaining to do if Maxwell decides to do any serious talking to prosecutors. More from The Daily Beast:

Prior to an apparent falling out with Epstein in 2004, which appears to have been over a real-estate competition, Trump hung out socially with the late financier for years. As recently as 2002, Trump called Epstein a “terrific guy” whom he had known for 15 years. The two of them threw a 1992 party at Mar-a-Lago that featured a guest list of Epstein, Trump, and 28 “calendar girls.”

Baier never said a word about Trump’s relationship with Epstein. He closed the interview without further comment.

Bemused commented 2020-07-28 03:38:07 -0400 · Flag
Ellen: my hope is that he will continue to reject reality for the remainder of his time. Trusting that he will get his marching orders on November 3rd, Americans will need to hold huge peaceful marches to convince everyone that this administration has to go. I would not like Pence to handle the remaining 98 days: he is – to my mind – a far more serious danger to American principles. It takes a truly dedicated fascist to hold one’s ego in check for over 4 years, secure in the expectation that he will be taking over.
His followers most certainly won’t care about anything the current administration does to keep hold of power: that’s a given that voters have absolutely got to change.

Vote blue no matter who! All the way down to dog catcher.

Ellen commented 2020-07-27 23:49:38 -0400 · Flag
Bemused, I agree. Our only hope is to a) beat him decisively and let him know he’s losing big (though I’m worried his followers won’t care and will do anything to keep hold of power) and. maybe more importantly, make him so miserable and deflated a la Tulsa that he won’t want to stay or, better yet, will resign or decide not to run again.

Bemused commented 2020-07-27 04:42:23 -0400 · Flag
Hi Ellen. I’ve been lurking … too appalled by what’s been happening to find words to post. I’m increasingly convinced that the sending of federal goons to Dem cities is a prelude to what may happen should the incumbent be given his walking papers.

Keep it up but keep it peaceful, folks: the goons are looking for an excuse – any excuse – to start clapping down on Americans who have the gall to exercise their 1st amendment rights for the “wrong” cause.

Good to “see” you again!

It would have been MORE believable.