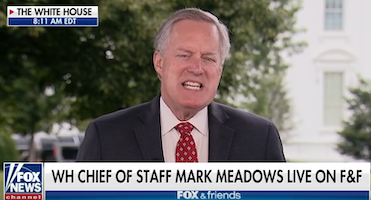 In a speech at the White House on Saturday, Trump said the US has tested more than 40 million people “but by so doing, we show cases, 99% of which are totally harmless”.

Experts suspect Trump was referring to the US death rate from Covid-19, which is about 1%, but point out that 15% to 20% of infected people end up in hospital, with some suffering debilitating health problems. And although the overall rate of increase in US deaths has been on a downward trend, fatalities are a lagging indicator. A Reuters analysis found that at least five states have already bucked it.

While it is true the US has stepped up testing, the number of new cases is increasing at faster rate and now stands at nearly 2.9m, the highest in the world and double that of Brazil, the second worst-hit country. Sixteen US states have posted new record daily case counts this month, with Florida hitting 11,000 in a single day. Texas passed 8,000 hospital admissions on Sunday, causing some mayors to consider launching new stay-at-home orders

But that was on CNN. On Trump’s favorite morning show, Dear Leader is always right! Spreading dangerous misinformation to Americans in the middle of a pandemic is no exception!

The discussion began with “approaching a nine” on the Trump approval scale Brian Kilmeade gifting Meadows the opportunity to rehab Trump’s claim. Kilmeade feigned objectivity but offered no independent research, no facts, no context and left it entirely up to Meadows to amplify on Trump’s deceit:

KILMEADE: Mark, the president said 99% of these cases, the COVID-positive case are harmless. Where did he get that stat from? Is that a generalization?

MEADOWS: No, I don’t even know that it’s a generalization. When you start to look at the stats and look at all the numbers that we have, the amount of testing that we have, the vast majority of people are safe from this.

When you look at the deaths that we have if you’re over 80 years of age or if you have three what they call co-morbidities – diabetes, hypertension, heart issues - then you need to be very, very careful.

Outside of that, the risks are extremely low and the president is right with that and the facts and the statistics back us up there.

What not one of the three cohosts told viewers is that even “mild” cases of COVID-19 leave patients with serious, persistent symptoms, including strokes in young people.

Yet despite her claim to want to be a journalist “not in the tank” for anyone, cohost Ainsley Earhardt immediately changed the subject to whether or not the Paycheck Protection Plan will be extended, without a single follow up question.

As The Washington Post reported today, Trump’s advisers are working to “convince Americans that they can live with the virus — that schools should reopen, professional sports should return, a vaccine is likely to arrive by the end of the year and the economy will continue to improve.”

White House officials also hope Americans will grow numb to the escalating death toll and learn to accept tens of thousands of new cases a day, according to three people familiar with the White House’s thinking, who requested anonymity to reveal internal deliberations. Americans will “live with the virus being a threat,” in the words of one of those people, a senior administration official.

They’re of the belief that people will get over it or if we stop highlighting it, the base will move on and the public will learn to accept 50,000 to 100,000 new cases a day,” said a former administration official in touch with the campaign.

And who better to help Americans “learn to accept” 50-100,000 new cases a day than the three Fox & Friends lickspittles?

Later in the same interview, Kilmeade handed Meadows another golden opportunity to promote the pro-death agenda without any pesky challenge:

KILMEADE: Is the message from the president from here on in, being that the cases are growing, and it's the state's opportunity to get it under control in Texas, Arizona and Florida - we have to live with this? We have to live with the virus and we have to go on, and is that a change of tactic? Instead of "crush the curve," now the curve’s going up, but you're not going to shut down the economy again. Is that the theme?

MEADOWS: Well, we're not going to shut the economy down again. I think the theme is this - is that we have to adjust our personal lifestyle in a temporary basis, because help is on the way. I mentioned earlier about those vaccines. Literally tens of billions of dollars, this president authorized tens of billions of dollars to make sure that we have a vaccine - not a month early, not six months early, but a year earlier than most said - would say that it's even possible. He's willing to invest to make sure that whatever adjustment we have to make in our lifestyle is temporary. We got to get the schools open this fall. We're coming up with plans to do just that.

Once again, it was “tough journalist” Earhardt to the rescue. The Super Duper Christian had no problem with the “learn to live with death” agenda (while she and her colleagues work from a safely remote studio). Instead, she changed the subject to the upcoming election to replace Meadows in Congress.

You can watch the Fox News pro-death agenda below, from the July 6, 2020 Fox & Friends.

Anonymous commented 2020-07-06 18:38:31 -0400 · Flag
I’m interested in what Kilmeade meant when he asked, “Is that a generalization?” Meadows seemed unsure: “No, I don’t even know that it’s a generalization. When you start to look at the stats…etc.”. Uh, stats ARE generalizations. My guess is that in their minds, “generalization” is in this context is a euphemism for “hyperbolic BS”. They rely on that so heavily, they definitely need the euphemism.