Marco Rubio Refuses To Say Whether Iraq War Was A Mistake 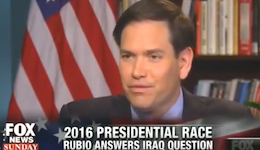 On Fox News Sunday, host Chris Wallace tried to get Rubio to say what he thinks of the Iraq war, given what we know now. But Rubio only seemed to want to discuss the war from the perspective of what he thought was known at the time of the invasion.

Wallace played clips of Rubio’s past statements about the Iraq invasion. Afterward, Wallace asked, “Isn’t that a flip? Six weeks ago, it made sense to invade Iraq in 2003, now you say it was a mistake?”

”Two different questions,” Rubio insisted. “It was not a mistake. …The president, based on the information that was provided…”

”He was saying based on what we know now,” Wallace pressed.

”Based on what we know now, I wouldn’t have thought Manny Pacquiao was going to beat Mayweather in that fight,” Rubio shot back.

”You were asked the same question, and you said it made sense,” Wallace continued.

But Wallace kept up the pressure. “What she asked you, was it a mistake to go to war with Iraq?” he asked.

Rubio continued waffling. “It was not a mistake given the fact what the President knew at the time,” he replied.

”No she didn’t say that. She just said, ‘Was it a mistake?’” Wallace challenged.

”That’s not the same question,” Rubio said. “The question I was asked is ‘what you know now.’ Based on what we know now, I think everyone agrees.”

“Was it a mistake to go to war with Iraq?” Wallace asked again

Instead of directly answering, Rubio said, “That’s not the same question.”

“It was not a mistake for the President to decide to go into Iraq.” Rubio said.

”I’m not asking you that,” Wallace pointed out.

Rubio kept waffling. “The world is a better place because Saddam Hussein is not there. I don’t understand the question you’re asking.”

So Wallace repeated. “I’m asking you, knowing everything as we sit here in 2015.”

”A President cannot make a decision on what someone might know in the future,” Rubio dodged.

Wallace was not deterred. “That’s what I’m asking you. Was it a mistake?”

“It was not a mistake for the President to go into Iraq based on the information he was provided as president,” Rubio replied.

Why won’t Rubio say what he thinks of the war, knowing what we know now?

Watch Wallace's tough questioning below, from today’s Fox News Sunday, with video via Raw Story and Crooks and Liars.

NewsHounds posted about Marco Rubio Refuses To Say Whether Iraq War Was A Mistake on NewsHounds' Facebook page 2015-05-17 15:48:29 -0400
Why wouldn't Rubio just say what he thinks about the Iraq war?