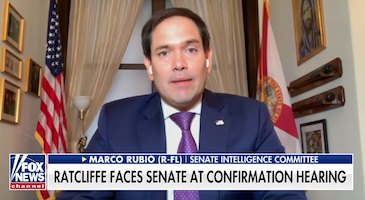 Appearing on Fox & Friends this morning, Rubio was prompted by cohost Ainsley Earhardt to attack Democrats and cheerlead for Donald Trump’s nominee with these “questions” about Ratcliffe: “What do you think about the Democrats not supporting him just because of politics? Is he a good guy? Does he deserve the job?”

Rubio took the hint and complied, then he quickly changed the subject to Biden and the completely irrelevant veepstakes:

The second point is there isn’t a person on earth, there isn’t a human being on this planet that the Democrats would support if nominated by Donald Trump for this position and virtually any position at this point. … I believe John Ratcliffe will do a great job as DNI.

Funny, Trump was the first modern president with no experience in government or the military yet Rubio is a Trump fanboy. None of the three cohosts mentioned it.

Instead, Steve Doocy nodded in agreement and Brian Kilmeade grinned at the praise for Ratcliffe. All three nodded with approval as Rubio reiterated his accusation that Democratic opposition is only partisan.

But here’s an important piece of information that each of the cohosts, including “tough journalist” Ainsley Earhardt failed to tell viewers. Loyalist Ratcliffe withdrew from consideration for that post last summer, less than a week after Trump picked him, after revelations he had exaggerated his razor-thin credentials and confirmation by the Republican Senate was in doubt.

So why are Republicans set to confirm Ratcliffe now? The Guardian suggests one factor is that they want to get rid of Ric Grenell, the unqualified loyalist now serving as acting DNI.

Katrina Mulligan, a former official who worked for more than 10 years in the office of the director of national intelligence (ODNI), suggested another factor that has changed since last summer could be that the Senate is eager to replace the current acting DNI, Richard Grenell, another partisan with even less experience than Ratcliffe and who is not answerable to Congress because he is not confirmed in the role.

Mulligan added that US intelligence officials may be resigned to Ratcliffe getting the top job for similar reasons.

“The morale at ODNI is so low right now and people are so fearful, that I think that there is a real sense that it could be worse,” she said. “There’s this sense that at least he can form coherent sentences, and at least he has a modicum of experience which the current acting DNI really did not.”

You can watch the cheerleading for this pathetic nominee below, from the May 6, 2020 Fox & Friends. The Ratcliffe discussion starts at about 5:06.

scooter commented 2020-05-06 15:31:41 -0400 · Flag
The 2 front runners for Biden’s VP pick are both currently sitting senators, but go ahead Marco and talk about no qualifications and never having won an election. Effing little liar.