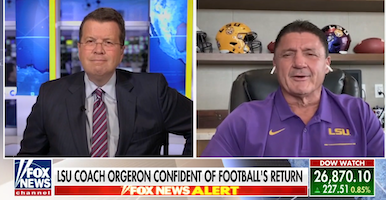 “I think we definitely need football,” Orgeron told Fox host Neil Cavuto. “I think we’re going to have football. … We’re ready. … We have not had one breakout of a virus in our workouts. Our guys have done a tremendous job.”

What Orgeron didn’t mention is that 30 team members tested positive for coronavirus earlier this year, after a group of five or six players went barhopping in a nightlife area known as Tigerland that produced more than 100 positive cases.

Cavuto didn’t mention that either. He asked, “Will they be playing to a full stadium?”

Orgeron replied, “I don’t know that but, obviously, I want Tiger Stadium as full as we can." He added, “I think that if you do wear a mask, if you do take a temperature and the right people come for the game, I think we can fill it up and have a great year.”

Cavuto suggested that smaller, lesser-known schools will be in “a world of hurt” without football.

Orgeron agreed. He said, “I think the country needs it, I think the state of Louisiana needs it, the economy needs it, we all need it. I think our children need to get back to school and we need to get on the right track and find a way to fight this thing.”

“If everybody wears a mask, they practice social distancing, it is safe,” Orgeron continued. “It’s something we have to push forward and we have to find a way to go on and live our life the way we live it and to beat this thing.”

Let’s see him sit in a football stadium with no social distancing for 3-4 hours.

Meanwhile, you can watch Orgeron below, from the July 15, 2020 Your World.