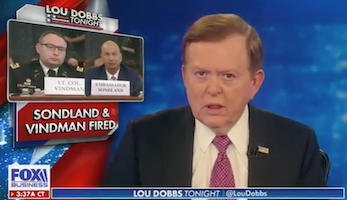 Fox Business host and informal Trump adviser Lou Dobbs sent a “be more loyal to Trump or else” message when he attacked Secretary of Defense Mark Esper for not helping Donald Trump retaliate against Lt. Col. Alexander Vindman after he testified in the Trump impeachment inquiry.

Clearly, Dobbs was sending a message to both Esper and Fan-in-Chief Trump Friday night with ominously authoritarian comments. As Suzie Madrak explained at Crooks and Liars (where I am a contributor), Dobbs’ beef was that Esper “dared to give Lt. Col Alexander Vindman and his brother jobs after they were purged by Trump in his post-impeachment retribution.” Or, as Dobbs put it, Esper gave Vindman "a soft place to land."

What would Dobbs have preferred? That Esper made sure Vindman never works again? Locked him up? There seems to be no bottom to the anti-democratic viciousness of the Trump crowd.

Dobbs played a clip of Esper saying, “We protect all of our servicemembers from retribution or anything like that,” then called Esper's words “nonsense.” Not that Dobbs has any standing attacking military policy. As Madrak pointed out, he never spent a moment putting his own MAGA fanny on the line for his country. Lt. Col. Vindman, on the other hand, not only served but earned a Purple Heart after being wounded in Iraq.

DOBBS: Just where the hell did Esper come up with this suggested threat of any kind of retaliation?"This guy is a beauty. During his confirmation hearing last July, Esper said his views are more aligned with Jim Mattis than those of the president or better yet, the commander in chief. Esper has also contradicted the president on possible targets in Iran of Qassem Soleimani’s threats against our embassies when he was taken out.

I mean, this guy is really – he’s in need of serious, serious reality checks and he should remember that there is a chain of command, particularly since he’s in the Defense  Department and had better start saluting from time to time rather than contradicting the commander in chief in my humble opinion.

You can watch Dobbs’ phony patriotism and genuine fascism below, from the Fox Business Network’s February 7, 2020 Lou Dobbs Tonight, via Crooks and Liars.

Lawrence Geller commented 2020-02-12 10:47:16 -0500 · Flag
I’d love to see how chicken-hawk Dobbs would react under fire. If Trump (when Trump) decides to invade Iran, I want to see Dobbs and all his cronies on the front lines! I’d especially like to see General Bone Spur make a spectacular entrance into Tehran the way Slim Pickens did in Dr. Strangelove!

John McKee commented 2020-02-11 17:17:38 -0500 · Flag
Don’t know about you guys, but I think my brain is too small and fragile to hold all of Trump’s treasonous cronies and enablers front of mind at the same time. Sometimes it can be weeks, well, days on end that I can keep Oliver North, ‘Justice’ Kennedy, Perry, Wilbur Ross, DeVos, Kirstjen Nielsen, Paul Ryan, Coen, Franklin Graham, Falwell, Erik Prince, the Mercers, Bannon, Miller and a hundred others at bay.

When I think back to the Shrub’s worst of the worst, it was only a dozen or so (as far as I know) at the heart of darkness. Cheney, Rumsfeld, Ashcroft, maybe half a dozen more from the cray-cray PNAC gang, Rove and a few lesser lights. This time round there must be many hundreds of villains who will need severe punishment once the madness has past.