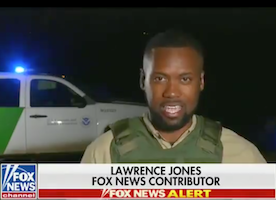 Fox News contributor Lawrence Jones probably got a different kind of attention than he had hoped for when he donned a very small tactical vest to visit the border. After being relentlessly mocked on Twitter, Jones dubiously claimed the Border Patrol made him do it

This is the tweet that got the mockery going:

Coming up on @FoxNews live from the border. pic.twitter.com/aRlNQxrO1x

And this is Jones’ explanation:

Border patrol made me wear it. Now, who's the fool? https://t.co/8ytTDLATth

Jones, who is also the editor-in-chief at Campus Reform, has the official title at Trump TV of Fox News contributor. But on his Twitter feed, he bills himself as a “@seanhannity correspondent.” Also “Storyteller.” He certainly seems to have gotten that part right. Because in addition to falsely suggesting the border is a war zone, Jones did not make a persuasive case that the was all the Border Patrol’s fault. As Raw Story noted, real journalists Jacob Soboroff and Soledad O’Brien, each of whom have done extensive reporting from the border, say they have never worn a vest.

This is totally ridiculous.

I have never once worn a bulletproof vest at the border, nor has CBP ever asked me to -- even while on a chase with Border Patrol to apprehend migrants in remote Arizona desert in the middle of the night.

No I’ve done a zillion ride alongs—and was just reporting our entire show from the border—and nope, no vest. https://t.co/LG3R7bhk9k

Mediaite asked U.S. Customs and Border Protection about Jones’ vest “but did not receive a response in time for publication.”

However, on Twitter, Jones continued to play up the notion that he had been in danger:

Thanks for keeping me safe, K. pic.twitter.com/M3aA2QIZWV

Jones told the Hannity viewers Thursday night, “I’m going in danger with these Border Patrol agents to report on this story,” the fake correspondent said. “In order to do my job and the border agents to do their job, I had to come with this vest that they supplied.” However, when Hannity noted that an agent was nearby, thus suggesting that Jones could get an official statement about the vest, Jones took a pass.

However, while he was at it, Jones played the part of a Border Patrol agent, too. “Last night, as we’re going into the thick of it, we caught two Chinese nationals!” Jones said excitedly. A banner on the screen read, “LAWRENCE JONES JOINS BORDER PATROL FOR INSIDE LOOK AT BORDER SECURITY EFFORTS IN LAREDO, TX.” Now, I don’t think Fox meant “join” in the sense of “become part of” but you wouldn’t know it from the way Jones talked. He told another anecdote about seeing migrants trying to cross the border, saying, “We didn’t catch them but we did make them return back to Mexico!”

Look, I don't really care who came up with the idea that Jones wear a vest. The point is, it's clear that Jones didn't need it and that someone thought the optics of making the border look like a war zone was a good idea. Clearly, Jones was using his report to boost his standing in Trump TV World. Whether that's for a job in the Trump administration or something bigger on Fox News doesn't really matter. What counts is that the credulous Trump TV viewers, along with the Fan in Chief, probably believed the BS.

Watch Jones play a warrior on TV below, from the April 4, 2019 Hannity.

.@LawrenceBJones3 on viral bulletproof vest pic: CBP "told me to put it on to keep us safe here. Just two months ago, there was a shooting. ... We control this side of the border, but the cartel controls the other side of the border. There's been gun fights." pic.twitter.com/71BeGMCBZd

Doug Dupuis commented 2019-04-05 16:22:36 -0400 · Flag
Kind of reminds me of the time when Sean and Rick Perry went down to visit the border and Sean acting all macho standing next to some huge machine with his ball cap backwards wearing sunglasses. About as funny as his MMA training video.

Eyes On Fox commented 2019-04-05 12:40:13 -0400 · Flag
Fox News relentlessly hypes illegal immigrants as crazy dangerous. The rest of the news media points out border towns are extremely safe. So it’s obvious to me why Jones, a Hannity correspondent, is wearing body armor. My only surprise is he isn’t carrying an assault rifle to pimp the NRA. 🤡