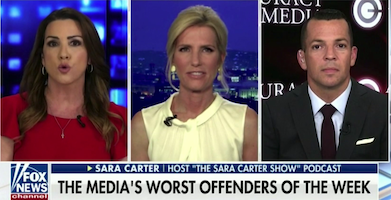 After Donald Trump dangerously suggested injecting disinfectant as a treatment for COVID-19, then pretended he had been sarcastic when he clearly hadn’t, Laura Ingraham and her two-Trump worshiping guests shrugged off any possible deaths that might result, along with Trump's cowardly lie once he faced a backlash – and attacked anyone who might dare criticize Dear Leader.

Yesterday, the Republican governor of Maryland and chair of the National Governors Association, Larry Hogan, said his state’s emergency hotline had received “hundreds of calls” asking if ingesting Clorox or alcohol cleaning products would help fight the coronavirus.

But for Ingraham, et al. Trump’s political life was more important than Americans’.

Contributor Sara Carter kicked off the culture of death. Ingraham called her “one of my faves” in the introduction. But Carter has a history of shoddy work that has gotten her barred from Fox’s news side. It didn’t take long to see why.

The discussion began with Ingraham minimizing Trump’s jeopardizing of American lives as a lack of clarity. Carter, however, seized on the moment to suggest the outrage is just a media hoax, a la the Russia investigation. Sound familiar?

INGRAHAM: Sara, OK, the president maybe wasn't as clear as he could have been, but he's hearing a lot of inputs from the medical community about all these -- this is new, that's new, this is an innovation. So was he telling Americans to drink Clorox, really?

CARTER: Absolutely not. Laura, these are journalists that don't let the facts stand in the way of their lives. They hate Donald Trump, the president, so much that they will twist his words whenever they can at the expense of the American people. Any American and anybody with common sense that watched his briefing knows that he didn't do this.

But this is why the president does the right thing. He gets out there every single day, does these briefings directly with the American people, and just cuts out the middleman, which are the Trump-hating media.

Since then, the White House has cut back on briefings, in the realization they are hurting Trump's re-election chances. But I'm sure this crowd will come up with a way to spin that, too.

Ingraham did not challenge a word from Carter. Instead, she turned to Adam Guillette, of the right-wing Accuracy in Media, to suggest that Trump never said what her own colleagues have acknowledged he said. Even Trump-adoring Dr. Nicole Saphier acknowledged it. In fact, Ingraham slyly acknowledged as much as she prodded Guillette to defend Trump’s comments anyway.

INGRAHAM: I have got to tell you, Adam, I'm watching this, and I think, did he say Clorox and Lysol? And Lysol comes out with some big statement. I guess people could take words, and, I guess -- but you really get the sense that the media are trying to drive this narrative that Trump not only doesn't want to save American lives, but he's basically just the terminator here, but not in a good way.

GUILLETTE: Not only that, it seems like they are on the other side. Trump is trying to fight the disease, and I'd swear that some of them are rooting for the disease. They rooted against hydroxychloroquine working, they were hoping it wouldn't work. They are rooting against sunlight killing it. They are rooting against the summer heat wave killing it. You'd swear they are for the disease. The only advisable actions that they offer are to, a, freak out, and, b, worship Andrew Cuomo. That's all they've got.

INGRAHAM: Again, any bit of good news or treatment that even helps some people is immediately discounted if Donald Trump in any way advocates for it.

Actually, it’s Ingraham and other Fox hosts who have, in effect, promoted death by coronavirus by advocating that states reopen businesses even as the contagion spreads.

Now we know Ingraham and her guests don’t care too much about people poisoning themselves, either.

You can watch the culture of death below, from the April 24, 2020 The Ingraham Angle.

Eyes On Fox commented 2020-04-27 14:45:15 -0400 · Flag
You know something is desperately wrong when some guy from an organization called Accuracy in Media actually shows up to support TrumpTV™.

Doktur Laura: “…OK, the president maybe wasn’t as clear as he could have been, but he’s hearing a lot of inputs from the medical community about all these — this is new, that’s new, this is an innovation.”

Okay, I’m sorry Not-A-Doctor Laura BUT JUST NO! Suck Trump’s appendages all you want but you’ll never convince a rational mind anyone in the medical community recommended injecting disinfectants or anything like it. That’s just prima facie stupid. You can’t pretend Trump’s habitual confusion can make disinfectants even vaguely legitimate medically. So just stop there.

The guest clowns are just spewing generic right-wing smears of the librul media to deflect Trump’s incompetence because not a fact props up our naked emperor. They can stop trying too.

Jan Hall commented 2020-04-27 14:36:03 -0400 · Flag
Republicans investigated Benghazi for 2 and one half years for 4 lost lives. With 55,000 + and counting lost lives during President Rump’s bumbling of the Covid-19 Pandemic, Democrats can, by the same ratio investigate the Rump administration for the next 34,375 years. And counting.