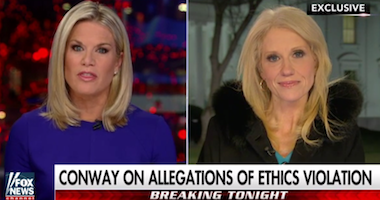 Today, Kellyanne Conway appeared to have broken federal law when she used her taxpayer-funded position to shill for Ivanka Trump merchandise on Fox & Friends. But during a friendly chat with Fox’s Martha MacCallum later, Conway never apologized for her transgression. Instead, she made it clear that a little thing like breaking the law was A-OK with her and Donald Trump.

As I posted previously, it was Trump who crossed the ethics line first when he attacked Nordstrom – from his official POTUS Twitter account, no less – for dropping Ivanka Trump’s line of merchandise. So when Conway appeared on Fox & Friends and urged viewers to go out and buy Ivanka merch, she clearly knew she was sucking up to her boss.

Whether Conway knew she was breaking a federal law in the process or not, she clearly didn’t care much.

But other people did. Fox's Chris Wallace blasted Conway and Trump on the Happening Now show a few hours later. Press Secretary Sean Spicer said Conway had been "counseled" about her behavior. According to The Hill, House Oversight Committee Chairman Jason Chaffetz (R-Utah) and ranking member Elijah Cummings (D-Md.) worked on a joint referral of Conway to the Office of Government Ethics “to determine whether she violated ethics laws barring federal employees from using their public offices to endorse products.”

So in the wake of the hullaballoo, Conway revisited Fox News, this time The First 100 Days, hosted by MacCallum.

Kelly refused to comment any further about being "counseled."

So MacCallum moved on to ask about the Chaffetz/Cummings letter.

CONWAY: Well, we’re aware of that letter and we’re reviewing that internally. I’m just really happy that I spent an awful lot of time with the president of the United States this afternoon and that he supports me 100%.

MACCALLUM: So you spoke about that matter and he is not – doesn’t have any intention to suspend you?

CONWAY: We spoke about a range of matters and he supports me 100%. In fact, it was a very heartening moment. All I can to America’s women is, at some point in your life, you ought to have a boss who treated me the way that the president of the United States treated me today.

Putting aside the Freudian slip that suggests Conway doesn’t really care about “America’s women,” it’s pretty darned clear that Trump doesn’t give a fig about any ethics conflict.

And Conway doesn’t either.

Eyes On Fox commented 2017-02-10 11:22:29 -0500 · Flag
Trump is such a monstrous narcissist it’s going to be impossible for him to learn the lessons of previous administrations: Quickly admit you screwed up and promise not to do it again. It won’t end the media scrutiny but it quickens greatly it going away.

We’re seeing identical issues with #OrangeHitler’s Muslim ban. If The Donald was smart – and nobody will accuse him of that – his administration would quickly tweak his executive order then move forward. No, he prefers Twitter tantrums.

CNN’s dubious analysis is Der Furor backed down on his One China policy. The flaw in that theory is this is a separate example of idiot Trump practicing his imbecilic “Art of the Deal” strategy where you start negotiating with an extreme position then work backwards from there. The Chinese are making him look like a fool as they’re better deal makers than Hair Hitler ever will be.

They don’t care, and they’re not going to change their behavior. They’re happy that you don’t like them – they enjoy rubbing this kind of stuff in people’s faces. It’s called bullying. They’ve been doing it for the past 18 months. Not a surprise that they’re going to their usual safe space.

I do find it interesting that O’Reilly, Carlson and Hannity very carefully avoided mentioning this situation AT ALL. It was as though this never happened, while they were fuming over the Pence White House being appropriately slapped down by the 9th Circuit. Now, if Robert Gibbs early in 2009 had endorsed a product hawked by Michelle Obama while being interviewed by CNN, I have a feeling the entire Fox News network would have been in an uproar. Jay Sekulow would be screaming from the rafters that Gibbs needed to be thrown in the hoosgow immediately to restore democracy. O’Reilly would be intoning heavily on the loss of dignity for the White House and the damage this could do to our standing with “the folks” everywhere. But if the Pence White House does it? All good! Nothing to see here. Move along. (Or at the more extreme edge of bullying, you can check out Rush Limbaugh’s response – which was to viciously laugh at anyone thinking there was anything wrong here, and to say that it was just so much fun to watch liberals get upset about it.)

scooter commented 2017-02-10 00:54:50 -0500 · Flag
This entire administration starting with the so called president feels that they’re above the law. How long will America tolerate this crap?