Jon Stewart Challenges Fox News To A ‘Lie Off’ 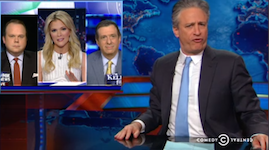 Jon Stewart gave one of his best commentaries on the tactics of conservatives Wednesday night. And just as important, Stewart addressed the importance of not caving to what he suggested is little more than the hissy fits of a four-year old.

It started with a clip of Megyn Kelly claiming that some of Stewart’s criticisms of her “had no foothold in the facts.”

“You have cast aspersions on my honor! I demand satisfaction!” Stewart mugged. He continued, “I challenge you, Fox News, to a Lie Off. Your distortions and fact footholds against mine.”

For starters, he played 50 of Fox lies in a 6-second Vine.

After a brilliant (and funny) shot at Rush Limbaugh, Stewart got serious:

They’re pretending that our truthfulness is what’s really important to them. Which, ironically is not true. What matters to the right is discrediting anything that they believe harms their side. That’s their prime directive. …This mission drives their attack on all the institutions that form the foundation of the country they purport to love so dearly.

…This is their genius. They purport to want to fix things but conservatives are not looking to make education more rigorous and informative or science more empirical or verifiable or voting more representative or the government more efficient or effective. They just want all those things to reinforce their partisan, ideological conservative viewpoint. Because in their mind, the opposite of bad isn’t good. The opposite of bad is conservative. …They judge solely on the level of conservative content in everything. It’s their only litmus test.

That was great. But Stewart wasn’t done:

…And you know the saddest part of all this? Republicans, conservatives are so (bleep)ing relentless in their drive for ideological purity that those institutions they complain about continue to cave. For the same reason, I guess, that you always seem to end up going to the restaurant your four-year old wants to go to.

…Let’s stop pretending that these concessions to the right will at any point sate the beast.

Are you listening Democratic “strategists?”

Watch it below, from The Daily Show on February 25.