Jesse Watters: I Didn’t Mean The Supportive Comment About QAnon You Heard Me Say 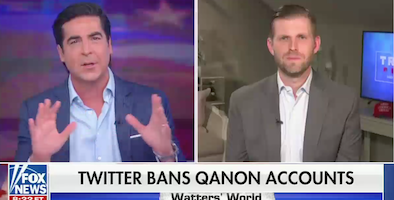 After telling Eric Trump that the conspiracy group QAnon has “uncovered a lot of great stuff” on Saturday, Fox host Jesse Watters now claims, via Fox News, that his comments “should not be mistaken for giving credence to this fringe platform.” Riight.

On Saturday night, during a chat with Eric Trump, Watters suggested that Twitter’s removal of QAnon accounts is censorship designed to “interfere” in the election, i.e. harm Donald Trump’s re-election.

WATTERS: Some of the interesting things that are going on in terms of censorship and some funny business now, Q, you know I guess this conspiracy deal on the internet. Twitter's basically just cracked down, eliminated about 7,000 accounts, a hundred and fifty -- other 100,000 accounts are in the crosshairs. Do you think that this is an attempt to kind of interfere in an election? Because, you know Q can do some crazy stuff with the pizza stuff and the Wayfair stuff, but they've also uncovered a lot of great stuff when it comes to Epstein and when it comes to the deep state. I never saw Q as – is as dangerous as antifa, but antifa gets to run wild on the internet. What do you think of -- what's going on there?

Watters was able to frame the conspiracy’s alleged findings as “great stuff” without any lengthy consideration of some of the more destructive events in QAnon’s short history, including widespread advice (before the president proposed it) for followers to drink bleach to avoid COVID-19 infection; the murder of a crime boss in Staten Island; an arrest on charges of terrorism; an attempt to assassinate Joe Biden; and at least two kidnappings. In May 2019, the FBI labeled the conspiracy theory as a potential domestic terrorism threat, which did not stop Trump-world figures including Michael Flynn, the president, and his middle son from promoting QAnon in the past two months. (And as NBC News’ Ben Collins notes, the “great stuff” that the conspiracy’s anonymous leader has unearthed was actually brought to light by reporters and “bastardized by Q to fit a narrative about Satanic child cannibalism.”)

Eric Trump responded to Watters by saying that Democratic Congressmen Adam Schiff, Jerry Nadler and Eric Swalwell also do “crazy things,” thus suggesting that Q is no crazier than they are. 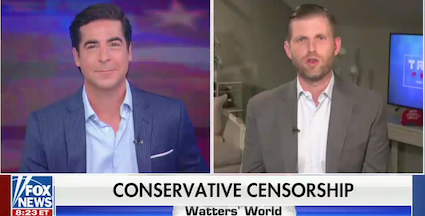 Eric Trump continued his dishonest whining, this time by claiming that every time conservatives go on Twitter or Apple News, “They’re literally spoon-fed a message that’s curated out of Silicon Valley by somebody who is radical, radical left."

Never mind that Daddy’s Twitter feed has a wide reach of 84.2 million followers and that his campaign spends millions for online ads on social media. And considering that Eric is the Trump son who ripped off a children’s charity, you might think that Watters would have posed a challenge there, especially if he really does not support QAnon.

Instead, Watters nodded his agreement and Eric went on to whine about The Washington Post.

Watters even agreed when Eric Trump claimed that polls are wrong and have oversampled Democrats “as a way, actually, to squash fundraising.” Watters’ own employer’s polls show Trump losing.

So, yeah, we should totally believe Watters when he said, in a statement provided to Mediaite by Fox News, that he didn’t mean what we heard him say the other night:

“While discussing the double standard of big tech censorship,” said Watters, “I mentioned the conspiracy group QAnon, which I don’t support or believe in. My comments should not be mistaken for giving credence to this fringe platform.”

You can watch Watters’ say what he now claims he didn't mean below, from the July 25, 2020 Watters World, via Media Matters.

John McKee commented 2020-07-27 20:18:10 -0400 · Flag
Qeric and Qatters are outstanding examples of how the once horrible-but-within-bounds Qepublican Party has washed itself down the drain.