Is Giuliani’s Nose Growing? He Ridiculously Claims His ‘October Surprise’ Was A Trump Ad 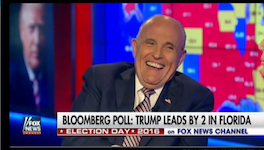 Rudy Giuliani has flip-flopped on his claim to have been tipped off to the FBI’s attacks on Hillary Clinton. After boasting, with vicious glee, about the Trump campaign having a “couple of things up our sleeve,” right before the FBI started hurling mud at Clinton, Giuliani insisted on The Kelly File Friday night that he was referring to pro-Trump advertisements.

I’ve written about the connections between Giuliani, the Trump campaign, some FBI agents and Fox News in several recent posts. But the best, most concise and most thorough reporting I’ve seen comes from Wayne Barrett, in The Daily Beast, and Rachel Maddow, in the first video below.

In Maddow’s detailed explanation, she walked through the financial and other connections between Donald Trump’s largest donor, Robert Mercer; Breitbart.com; Trump campaign manager Kellyanne Conway; the Clinton hit-book, Clinton Cash; the New York field office of the FBI; and the inquiry into Hillary Clinton that was trumpeted on Fox News and by the Trump campaign. Later, Maddow tied in Trump campaign surrogate, Rudy Giuliani.

Maddow noted the FBI connection to Giuliani and Fox, starting at about 12:05 in the video:

MADDOW: It’s one thing to cook up a dubious, conspiratorial political attack and fling it at your political opponent. It’s another thing altogether to cook up a dubious, conspiratorial political attack like this and have the FBI fling it at your opponent. That’s a different thing. And that is what the FBI, at least part of the FBI, is now doing in this election. They’re using stuff from Breitbart.com, apparently as their research, as their evidence and then they’re leaking about their new investigation into this evidence to Fox News, right before the election.

GIULIANI: He’s [Trump] got a surprise or two that you’re gonna hear about in the next few days. I mean, I’m talking about some pretty big surprise.

When asked by host Martha MacCallum what he meant by that, Giuliani said teasingly, “You’ll see,” and then he laughed maliciously. He added:

GIULIANI: We’re not gonna go down and we’re certainly not gonna stop fighting. We’ve got a couple things up our sleeve that should turn this around.

That Maddow clip aired November 3, 2016. The next day, Giuliani appeared on Fox & Friends and seemed to confirm that he was in on the anti-Hillary fix at the FBI.

GIULIANI: I did nothing to get it out. I had no role in it. Did I hear about it? You’re darn right I heard about it and I can’t even repeat the language that I heard.

But that night, after two top Democratic Congressmen asked the Department of Justice to investigate leaks from the FBI to Giuliani, he had quite a different story to tell Megyn Kelly. And, frankly, I’m surprised she didn’t laugh in his face.

GIULIANI: This is the vast right-wing conspiracy garbage all over again. You can investigate me. I spoke to no current FBI agents ever, in the last 10 months. I’ve had no communications with them. I haven’t destroyed any of my emails. I haven’t hammered my cell phone. All my communications were with former FBI agents.

Now, I think it’s quite possible Giuliani got his information from a former FBI agent (like James Kallstrom) who got inside information from somebody still within the agency. What kind of leaking that constitutes or not I don’t know. But I do know that Giuliani’s “explanation” to Kelly was an insult to the intelligence of Fox New viewers, no matter low that may be.

KELLY: So when you said to Martha MacCallum that, you know, “I think Trump’s got a surprise or two, you’re gonna hear about in the next couple days…”

Kelly obviously didn’t buy it. But she didn’t push for more.

KELLY: That would have been kind of lame. You should be glad that something bigger came out, to not make a liar out of you.

GIULIANI: I had no idea that Jim Comey was going to do what he did, not the slightest idea. What I did know – I’ll be absolutely truthful with you – what I did know is, from three or four former FBI agents, that the people within the FBI, they were telling me this, were outraged at Jim Comey’s decision in July, they believed it was a prosecutable case.

Kelly did challenge him on that. But what Kelly did not ask about was the other matter, Bret Baier’s explosive, anonymously-sourced report that Clinton was likely to be indicted and that her private email server had been hacked by several foreign intelligence agencies. Baier walked back and apologized for that reporting Friday as well.

Giuliani told the same story to Wolf Blitzer and, to his credit, Blitzer pressed Giuliani the way Kelly did not.

Jane S commented 2016-11-07 10:28:20 -0500 · Flag
It sure would be nice if we found out some day what was going on here. But my suspicion is that the majority of it is coming from former agents who are gossiping with active ones who aren’t involved in the investigation itself. I honestly don’t think very many, if any, current active FBI agents, even PO’d ones, who are actually involved in an investigation are likely to talk to media about it.

Let’s remember the actual people at FBI Comey had doing the Hillary server investigation unanimously agreed there was no there there. It’s people who weren’t involved in it who are enraged.

So Baier’s — and Herridge’s and Rudy’s and etc — sources almost certainly have only third-hand information at best.

When you listen carefully to Herridge’s reports, most of the time it’s “an intelligence source tells Fox News” or a “law enforcement source.” That could mean almost anything.

David Lindsay commented 2016-11-07 07:19:47 -0500 · Flag
Rudy’s end zone dance was premature. Now he’s very self conscience and denying everything. As a former AG, he probably knows he may get called before the Senate Judiciary Committee. And I’m sure there are FBI agents who don’t like their agency being whored out to the likes of Donald Trump. They’ll probably talk. Rudy won’t be in the eye of the hurricane but he’ll be pretty close IF this is pursued.

Yeah, this entire story is a Gordian Knot.

I’ve heard some whisperings Rudy might be investigated. If nothing else, it will wipe the degusting smirk from his face. Him cackling like the evil witch in “Wizard of Oz” on Fox News hinting of an October Surprise stink bomb is cringe-worthy.

Who was the source for Bret Baier’s propaganda spew on Hillary getting indicted and other nastiness? We know Rudy was feeding the Trump campaign. It’s not unreasonable he was Bret’s source – or should I say Catherine Herridge’s source – given the fact the hack didn’t even source his bulls—t to an internal FBI source if we carefully parse his words.

It doesn’t matter, at it’s root, the real villain is FBI director Comey. I’ll accept what I’m hearing from non-partisans Comey is a stand-up guy. However, his judgement is horrible and was a direct, unnecessary interference into Election 2016.

Almost equally disgusting to me is Fox News’ reaction. Even after Bret was embarrassed into confessing he made s—t up by other networks debunking his shabby reporting, Foxies kept running with ridiculous speculation and conspiracy theories. Even an unrepentant Baier kept promising to revalidate his nonsense with his discredited sourcing. Now that Comey has admitted there’s no there there, Fox News is still raising Hell and blowing hellfire smoke.

For example, “Fox & Friends” just mentioned a much repeated talking point there’s no way the FBI could sort through 650,000 emails. However, as CNN has pointed out, they’re using advanced analytics designed for this very task and time tested in previous investigations. Certainly Comey vaguely talking of some thousands and the ones subject to the search warrant could have easily been flagged before Comey’s 1st letter reopening the investigation.

No matter. Fox News is pretty much propping up Trump’s narrative the system is rigged by casting doubt on the FBI’s results. Certainly, Fox News is not critical of Trump’s conspiracy theory smear the FBI is in the tank for Hillary. If so, why would Comey have reopened the inquiry?

Naw. A Rudy Attorney General gig in a Trump presidency doesn’t work for me. I don’t look good in a brown shirt. ;^)

Ellen commented 2016-11-07 02:51:08 -0500 · Flag
But are you saying you think it was not a leak from the FBI to Fox? It’s certainly plausible that someone on the inside leaked to someone like, say, Kallstrom or Giuliani who told Fox. And that seems quite likely given what those guys have said. But isn’t it also possible that someone at the rogue NY office, not directly involved in a Clinton investigation but knows someone who is, spoke directly to Baier?

Baier may be an a$$hole, as i think he is, but he’s careful with the words he chooses to characterize sources to preserve deniability. He wants you to think he’s talking about FBI insiders, but he’s not.

John McKee commented 2016-11-06 17:13:30 -0500 · Flag
What a shameful, disgraceful POS this ghoul has turned out to be. Apart from the fact that he had ignored all advice to locate his Emergency Response HQ away from a building that had previously been the target of a largely unsuccessful al Qaeda attack, he performed quite well in the days following 9/11. Mind you, who wouldn’t? Even Bush came across OK once he crawled out from hiding.

Everything since has revealed more and more of his complete lack of anything that could point to a decent bone in his body. Just a hateful, vengeance-filled creep with a hyper-inflated sense of his own abilities and importance. Despicable Him.

It won’t be the last we hear of him. He’ll be a constant guest on Fox News spitting out the same dull talking points.

Kevin Koster commented 2016-11-06 15:22:54 -0500 · Flag
I really hope that after the election we will see a serious investigation into Giuliani and Kallstrom’s conduct here. Some real ethical lines were breached and potentially some legal ones as well. It’s one thing for Giuliani to hate Hillary Clinton and to say hateful things about her. It’s quite another for him to participate in an attempt to influence an election through the FBI, using smears and half-truths as his ammunition. This would not be the first time a prosecutor found himself on the receiving end of an investigation into corruption.

Eyes On Fox commented 2016-11-06 12:52:08 -0500 · Flag
But the fix is in for Hillary. No doubt. Explained by a record number of October Surprises all targeting 🎯 Hillary and a media in the tank for Hillary setting their hair on fire 🔥 to hyperventilate over them. 👍

David Lindsay commented 2016-11-06 11:48:38 -0500 · Flag
Bracewell and Giuliani was the law firm that was general council to the FBI Agents Association (FBIAA). The FBI is populated with some straight arrows and stuffed shirts that are probably not happy with the political leaks. And Rudy Giuliani is the epoxy resin glue that bonds the FBI directly to Donald Trump.