Is Bill O’Reilly The Next Brian Williams? 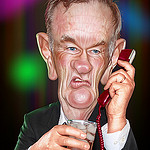 Mother Jones has come out with a very damning and very detailed examination of Bill O’Reilly’s claims about working in a war zone.

The entire article is a must read, but here are a few excerpts:

O’Reilly has repeatedly told his audience that he was a war correspondent during the Falklands war and that he experienced combat during that 1982 conflict between England and Argentina. He has often invoked this experience to emphasize that he understands war as only someone who has witnessed it could. As he once put it, “I’ve been there. That’s really what separates me from most of these other bloviators. I bloviate, but I bloviate about stuff I’ve seen. They bloviate about stuff that they haven’t.”

… Yet his own account of his time in Argentina in his 2001 book, The No Spin Zone, contains no references to O’Reilly experiencing or covering any combat during the Falklands war.

…American reporters were not on the ground in this distant war zone. “Nobody got to the war zone during the Falklands war,” Susan Zirinsky, a longtime CBS News producer who helped manage the network’s coverage of the war from Buenos Aires, tells Mother Jones. She does not remember what O’Reilly did during his time in Argentina. But she notes that the military junta kept US reporters from reaching the islands: “You weren’t allowed on by the Argentinians. No CBS person got there.”

That’s how Bob Schieffer, who was CBS News’ lead correspondent covering the Falklands war, recalls it: “Nobody from CBS got to the Falklands. I came close. We’d been trying to get somebody down there. It was impossible.” He notes that NBC News reporter Robin Lloyd was the only American network correspondent to reach the islands. “I remember because I got my butt scooped on that,” Schieffer says. “He got out there and we were all trying to get there.” (Lloyd tells Mother Jones that he managed to convince the Argentine military to let him visit Port Stanley, the capital of the Falkland Islands, but he spent only a day there—and this was weeks before the British forces arrived and the fighting began.)

There’s way more than this in the meticulously detailed and sourced article. Writers David Corn and Daniel Schulman catch inconsistencies in O’Reilly’s claims about a protest in Buenos Aires and an assignment in El Salvador during that country’s civil war. They say that neither O’Reilly nor Fox News has responded to multiple requests for comment.

But they’ve got some ‘splaining to do and I suspect they’ll be talking sooner rather than later.

But we know better — republican mouthpieces are allowed to say ANYTHING!! — and not be held accountable…

Fox “News” anchors are not held to the same scrutiny as real news people.

We all know that.

Joseph West commented 2015-02-19 23:54:55 -0500 · Flag
Well, d d, the very fact that O’Reilly claims (as you quote) “In Buenos Aires we were in a combat situation after the Argentines surrendered,” proves to be a bit troubling when it comes to factual phrasing.

I have never before heard the phrase “combat situation” used in connection with “after _____ surrendered.” A “surrender” indicates the END of a “combat situation” so it’s kind of hard to be IN a “combat situation” without any “combat.” Furthermore, there’s absolutely NOTHING on the web suggesting that Buenos Aires was ever attacked during the War; in fact, the British Secretary of State for Defence (per the Wiki article on “Operation Black Buck”) said that the British had NO intention of striking any target on the Argentine mainland. (Guess where Buenos Aires is? Hint: It’s NOT on any island controlled by Argentina and it’s NOT in the middle of the ocean on a floating platform.) So, if Argentina was assured (by the ENEMY) that the mainland was not going to be targeted, why would the capital city be “in a combat situation?”

It makes no sense—unless O’Reilly is, um, “embellishing the facts.” Or, as it’s also known, “lying.”

d d commented 2015-02-19 21:58:07 -0500 · Flag
Well, sorry folks, that below book link only takes you to the main page of BOR’s book (despite the fact that when I paste the link into a new window, it worked just fine and highlighted BOR’s words about the Falklands in yellow).

The passage highlighted in BOR’s book reads: “You know that I am not easily shocked. I’ve reported on the ground in active war zones from El Salvador to the Falkland Islands, and in chaotic situations like the collapse of the Berlin Wall and the Rodney King riots in Los Angeles.”

d d commented 2015-02-19 21:42:05 -0500 · Flag
BOR wouldn’t respond to Mother Jones but he responded back by way of Mediaite and Politico — by calling it all bullish!t and then proceeding to childishly attack MJ and David Corn. Like David Corn said in a recent tweet: “This Just In: O’Reilly resorts to spin and name-calling. Stay classy.”

O’Reilly said that he never claimed to have been on the Falkland Islands.

“I was not on the Falkland Islands and I never said I was. I was in Buenos Aires… In Buenos Aires we were in a combat situation after the Argentines surrendered.”

“It was clear that I did not say I was in the Falkland Islands. I’ve done myriad interviews over the years and I never said that,” O’Reilly told On Media.

Hmm, these links say otherwise – a passage from BOR’s own book and from his own mouth in a “Factor” interview…

Jan Hall commented 2015-02-19 21:09:46 -0500 · Flag
What’s this? Junior O’Reillys War Pen may not have have been a War Pen? Good Grief what next? What about that Billy Club Junior keeps in his desk? Was it really his Grand Pappys? Well at least Junior has proof of his Sexual Harassment Escapade.