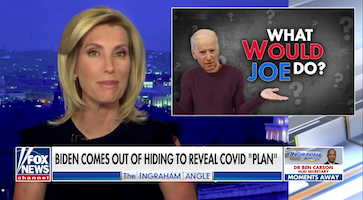 Ingraham kicked off her culture of death show last night by referring to Biden as a “rarely seen endangered bird on its way to extinction.” It’s a rather tasteless metaphor in the middle of a pandemic but these days Ingraham seems to be all about encouraging other people’s deaths. Nevertheless, she somehow forgot that Biden is leading Trump nationally and in most swing states.

“So how would Joe lead America through the COVID crisis?” Ingraham said, disdain dripping from her voice.

She played a clip of Biden saying, “I would tell the governors to listen to Dr. Fauci, listen to the scientists, listen to what the facts are.“

In response, Ingraham sneered, “What Biden seems to be saying, if you can unpack it, is that he would farm out critical decision-making to others, like Dr. Fauci and other unnamed scientists."

Ingraham must have some kind of comprehension problem. Biden said nothing of the sort. There’s a big difference between “listening” to scientists and putting them in charge of public policy.

Or maybe she was just being dishonest. She went on to suggest that following Fauci’s advice of not reopening yet “would mean that Americans would be poorer and less free. No work, unless it’s approved by experts. No worship services, no ballgames, no concerts, no travel to see your family or friends. Not, at least, until we have a vaccine. … Your kids are out of luck as well because the vaccine wouldn’t even be ready by September." How about Fauci's advice could mean not dead, dying or ill?

Yet Ingraham said nothing about going to worship services or traveling, herself. She didn’t even say she’s going out to restaurants or movie theaters. And did I mention that she’s working at home until at least June 15?

Ingraham continued her misrepresentation of what Biden said. Since this was a pre-scripted commentary, we know that Fox approved the deceit. “With all due respect to Dr. Fauci’s expertise, no one elected him to anything. There are devastating consequences of keeping children away from school for extended periods of time, especially at-risk children.”

Before long, Ingraham proceeded with Fox’s Fauci attacks du noir: painting him as not Trumpy enough to be trusted. “We all know that the only experts that would inform Biden are experts approved by the left-wing media,” Ingraham complained. As if Fauci hadn’t been chosen for the White House task force by the Trump administration.

Before long, Ingraham was praising Trump’s handling of the pandemic, which has left the U.S. the leader in both cases and deaths:

INGRAHAM: Thank goodness President Trump decided to let states chart their own course, though, toward reopening because now you can kind of see for yourself what life will be like under a Biden administration. What would Joe do? Well, he’d do pretty much what New York has done or California has done: lock down until the experts set you free, locked down until maybe Bill Gates gives his imprimatur to a vaccine. Our health care decisions will be informed by the WHO and not dictated by China [I think she meant to say “if” not dictated…]

FACT CHECK: Connecticut and Massachusetts are the only two states that have not started to reopen, and they plan to start doing so soon.

Ingraham concluded by saying, “The Democrats will keep this panic parade going at least through the election. What else do they have but fear itself?”

You can watch Ingraham’s latest death a-go-go below, from the May 12, 2020 The Ingraham Angle.

Bemused commented 2020-05-15 10:15:41 -0400 · Flag
I await with dread and trepidation the outcome of Wisconson’s lifting of all restrictions. I have a lot of family just north of the border and they’re absolutely, jumping-up-and-down, hootingly delighted that the border is closed. For a couple of months now, Americans have not been allowed in to buy their prescription drugs. While we feel for them, we’re convinced that the border should not be opened just yet.

Eyes On Fox commented 2020-05-14 12:04:26 -0400 · Flag
There are 2 lines of attack in the era of Trump Foxies like Laura should never take: Sexual assault and gaffs. Here Dr. Death grossly exaggerates a stumble where Biden’s clearly saying he’s not frustrated with his interviewers but those pushing to reopen (Hint: That’s you Laura!) despite expert warnings. Sure, Biden could have a cup of Trump’s covfefe to wake up or talked to Tim Apple about better iOS software for his teleprompter.

But Dr. Death’s stupid doesn’t end there. Watch her beat on experts and pick apart mostly Fauci through data-mining quotes but, in the end, is basically saying Fauci is honest and balanced in her assessment. On technical grounds Dr. Death has no argument. Period.

Dr. Death attacks New York for being ground zero spreading the disease nationally then unexplainably attacks them for trying to contain the virus. Says Dear Leader should stop aiding the city in their efforts. Huh? You want ground zero to keep spreading COVID-19 across America???

Then the final lie. Stable genius Trump made the decision for states to manage their response. Wrong. The federal government has no Constitutional ability to order closures nationally. Plus, while she’s right Biden says he’ll listen to experts, he too clearly said he’d leave the decisions to the states as the video clip she provided clearly says.

Bemused commented 2020-05-14 08:15:40 -0400 · Flag
Laura, from the safety of her living room, is sending out the marching orders to lemmings headed for the cliff. I would have nothing to say about that were it not that the lemmings will jump off after having infected at least one – probably more than one – person.
I know there are laws against homicide but isn’t there some law against the enabling of suicide? Which is what Laura is doing.