Has Roger Ailes Become A Key Strategist For The Donald Trump Campaign? 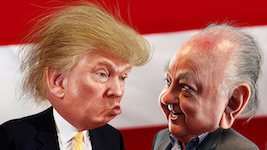 You may recall that when The Times reported earlier this week that the disgraced Ailes is helping Trump prepare for the presidential debates, the Trump campaign denied it.

But according to a Times article yesterday, Ailes was very instrumental in the latest Trump campaign shakeup that included the firing of campaign manager Paul Manafort:

It was an article in The New York Times last weekend — about frequent but frustrated efforts by Mr. Trump’s top advisers to curtail his pugilistic instincts — that set off the series of events leading to Mr. Manafort’s departure.

On Saturday, Mr. Trump raged at Mr. Manafort, holding him responsible for the article, according to people familiar with the episode. On Sunday, Mr. Trump hastily convened a meeting of paid and unpaid advisers including the pollster Kellyanne Conway; Roger Ailes, the ousted Fox News chairman; and Stephen K. Bannon, the chairman of Breitbart News, a conservative website. Mr. Manafort was present for part of the meeting.

Mr. Ailes urged Mr. Trump to reconfigure the campaign’s leadership, according to a Republican briefed on the meeting. A former Republican strategist and ad man who was friends with Mr. Trump long before his ouster, Mr. Ailes had reviewed some of the initial television commercials Mr. Manafort had overseen and told Mr. Trump in blunt terms that they were lackluster. (my emphases)

On Tuesday, Bannon and Conway took over the management of the campaign.

I don’t know if these changes will be enough to save Trump’s flailing campaign but it’s a safe bet that, even with Ailes officially gone, Fox News will coordinate its messaging with the campaign. And that the campaign will get very, very nasty.

Hey — who better for a man who admitted he’d date Ivanka if she weren’t his daughter to get advice from?

Jan Hall commented 2016-08-20 17:59:16 -0400 · Flag
Don’t forget Bill O’Reilly Jr. as African-American Outreach Coordinator. Donald T. Rump claims he will get 95% of the African-American vote. I’m not sure even Junior O’Reilly, with his well documented ability to tell tall tales can win that many votes for Mr. Rump.

It would seem to me Fox creation The Donald has already taken enough advise from Roger. But keep up the good work! 👍

Kevin Koster commented 2016-08-20 14:40:45 -0400 · Flag
Don’t underestimate Roger Ailes’ ability to toss out distractions and viciousness during a campaign. Remember his activities during the 1984 Reagan campaign and the 1988 George HW Bush campaign – particularly the Willie Horton ad. Ellen is correct that he’ll take this campaign even farther into the mud than they’ve already descended.

And don’t underestimate Ailes’ continuing influence on Fox News, particularly with Bill Shine being at the top of the pyramid. My instincts say that Shine and Ailes are coordinating as closely as they can – with Ailes not “officially” working for the Trump campaign but in fact actually doing so. This would explain the increasingly connected messaging of the Trump campaign and Fox News’ coverage. And of course, Fox News will continue to cover every Trump rally they can as though it was newsworthy.

I note in the gutterball territory that Jesse Watters sneered out another debunked cheap shot at Hillary Clinton last night – in which he “just” threw in the notion that Hillary Clinton had stolen 200K of silverware from the White House when she and Bill Clinton left there in 2001. Anyone actually having followed this whack-a-mole story would know that this is not actually what happened, and that if we are to compare departing presidents and their gifts that they take with them, Ronald and Nancy Reagan would dwarf everyone with the millions of dollars of materials they took.

I also note that for some reason, Sean Hannity is now repeatedly setting up “Town Halls” for Trump to appear presidential while Hannity arranges an approving group of right wing talking heads and angry white Trump supporters to buoy him up. I don’t know that I’ve ever seen a situation where a “news network” would go all-in like this for a candidate. It’s pretty blatant.

Of course, at the same time, there are several voices at the network that aren’t drinking this Kool-Aid. I’ll be very curious to see how the fallout looks in November and December. I have a strong feeling that some people will not be staying at Fox News afterwards.

mlp ! commented 2016-08-20 14:00:52 -0400 · Flag
So, what’s the point if he is ‘back’?
What can he offer other than ALL the Fox viewers, which I’m pretty sure Trump already has. let’s count the presidential candidates that Ailes has propelled into presidency since GWB:
Oh, wait…there hasn’t been any.
But, of course, Ailes wielded his vast power and knowledge to destroy Barack Obama, didn’t he?
Hmmmm.
I guess that didn’t work out so well, either.
Hillary Clinton???
Nahhh…she’s still standing.