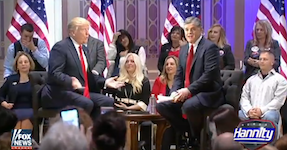 Sean Hannity spent another hour playing lapdog to Donald Trump last night. But what really seemed to excite him was the prospect of Trump putting “everything on the table” to attack Hillary Clinton.

In the first part of the interview, Hannity prodded Trump to reveal his mean-spirited nickname for Clinton. Which Trump promised to reveal on a future Hannity show. But Hannity was obviously dying to hear it right then. From the Fox News transcript:

HANNITY: Have you thought of a nickname for her yet?

TRUMP: I have, actually. I’ll release it on one of your next shows, but I don’t want to do it.

HANNITY: I think they want to hear it now.

HANNITY: But you do have a name picked out for Hillary?

TRUMP: Well, you know, I’d like to use “lying,” but we already used it for Ted. We don’t want to use it twice.

HANNITY: All right. We’ll come back in a month.

Later, in another segment, Hannity was obviously delighted with Trump's upcoming ruthlessness to Clinton:

HANNITY: I think you’re holding it close to the vest how hard you’re going to hit.

HANNITY: And if they hit back, is everything on the table?

HANNITY: That’s the way it should be?

Sean Hannity and Donald Trump: two peas in a hate-mongering pod of viciousness.

By the way, despite Trump’s claim that he’ll “do fantastic” with minorities, I only saw a sea of white faces in this audience.

See for yourself below, from the April 13 Hannity.

John McKee commented 2016-04-14 19:48:26 -0400 · Flag
It’s beyond bizarre. Just imagine how a sixties, seventies, eighties or nineties audience would have reacted to this year’s Complete Effing Circus-R. Even the Swift Boat ‘heroes’, Rotten Rove’s tricks and that extraordinary endorsement of John Kerry four days before the ‘04 election have nothing on the Trump’n’Cruz freak show.