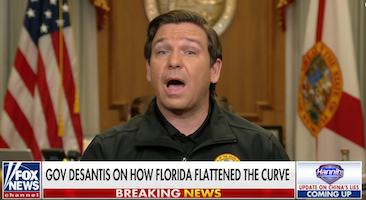 As Florida’s Republican Governor Ron DeSantis starts “re-opening” the state despite a growing number of coronavirus cases and public opposition, Sean Hannity praised him as some kind of life saver.

Hannity interviewed DeSantis from a remote location and neither said anything about going out in public where they were so eager for others to go.

Not surprisingly, Hannity helped DeSantis paint a distortedly rosy picture of the COVID-19 pandemic in Florida. Hannity campaigned for DeSantis in 2018.

“I’m gonna be honest, Governor,” Hannity began, which you can be sure meant nothing of the sort. “I was particularly worried about the State of Florida. … You have a very high elderly population. How did you do this because I would think Florida would have been one of the worst-hit states.”

“Well, you’re right, Sean,” DeSantis began. “People were predicting us to be worse than New York, like another Italy.” He boasted that despite “one of the newspapers in Florida” predicting 464,000 people hospitalized in the state, there were actually 2,200. Then he launched into a lengthy account of how his state “very early” focused on at-risk populations, such as the elderly. DeSantis listed testing efforts and “almost six million masks just to our nursing homes.” It suggested that somehow, this Trump-worshiping governor was able to secure all the testing equipment and PPEs desired when Maryland's governor, e.g., had to resort to extreme measures.

“And so we focused on a laser,” DeSantis said, meaning, apparently “like a laser.” He went on to claim that at the senior community The Villages, “they’re playing golf just like they always do but they’re doing it with social distancing.”

Next, DeSantis boasted, “We’ve got a great public health people [sic] at the county level. We work very good [sic] with state –  or the local governments as well. We’ve still got more work to do but clearly, we’ve done way better than all the experts said we would and I think we did it by a smart, data-driven approach.”

Here’s some data that doesn’t fit DeSantis’ sunny scenario. For one thing, a large majority of Floridians think the state’s economy should only reopen after public health officials consider it safe. And what do those public health officials DeSantis claims to have such a great relationship with think? Why, they are not so keen. Maybe that’s because just yesterday, Florida posted its second-highest daily increase in deaths from and an increase of more than 700 new cases from the day before.

As for those nursing homes DeSantis boasted about? He went to extraordinary lengths to keep the Miami Herald from finding out the names of all the elder-care facilities where there have been confirmed coronavirus cases, which suggests he had something to hide. However, Saturday night, a news-dump time if ever there was one, the state released a seven-page list of 303 nursing homes where staff or residents have tested positive. Yesterday, the Tampa Bay Times reported:

The death toll keeps rising in long-term care facilities, the state said Wednesday. More than 2,330 confirmed cases have now been found among residents and staff, an 8 percent increase from 24 hours earlier. There have been 248 coronavirus-related deaths linked to those facilities — roughly a quarter of the total COVID-19 deaths reported in the state.

“Honest” Hannity, never uttered a word of concern about those elderly people. Instead, he helped validate the fake picture. “Thankfully, it seems like you went right at the most vulnerable population and that’s where you put your biggest efforts. And it’s paid off,” he said.

Then Hannity used that praise to promote the unpopular efforts to open up. “Maybe we can learn something from this, is that you’re telling people, go outside and get some sun. Don’t hide in your house,” Hannity said. DeSantis added, “I think that that’s healthy. To just sit inside for two months eating Cheetos and stuff and watching Netflix, that’s not great.”

FACT CHECK: Most, if not all, states allow residents to go outside so long as they maintain social distancing.

If DeSantis is able to safely re-open his state without causing a spike in COVID-19 cases, more power to him. But until I see him and his family hanging out at the beach and any other place he’s ready to re-open, I’ll be avoiding the state like the plague.

The same goes for Hannity. He mentioned in this interview that he has a home in Florida. He said nothing about plans to go out and about.

You can watch Hannity and DeSantis push risks for others they are not openly adopting for themselves below, from the April 22, 2020 Hannity.

Bemused commented 2020-04-24 10:04:48 -0400 · Flag
But, but, but … those old folks are the ones who keep on voting GOP.
Must be that De Santis and his fellow GOPers have a strong suicidal streak since everything they plan on doing will probably shrink their voter base. Alternatively, he and his ilk – like President Trump – are extremely fond of gut feelings and hunches. Wilfully ignorant and proud of it.

John McKee commented 2020-04-23 22:20:27 -0400 · Flag
Once again, the worst people in the world are putting us into an impossible position. On the one hand, we long for them to be proven wrong and exposed as the inhuman monsters they are, while on the other we understand all too well that the proof will be in the unnecessary deaths of tens or hundreds of thousands of innocents.

America has less than 4% of the world’s population but more than 25% of the death toll. That is not an unfortunate accident.