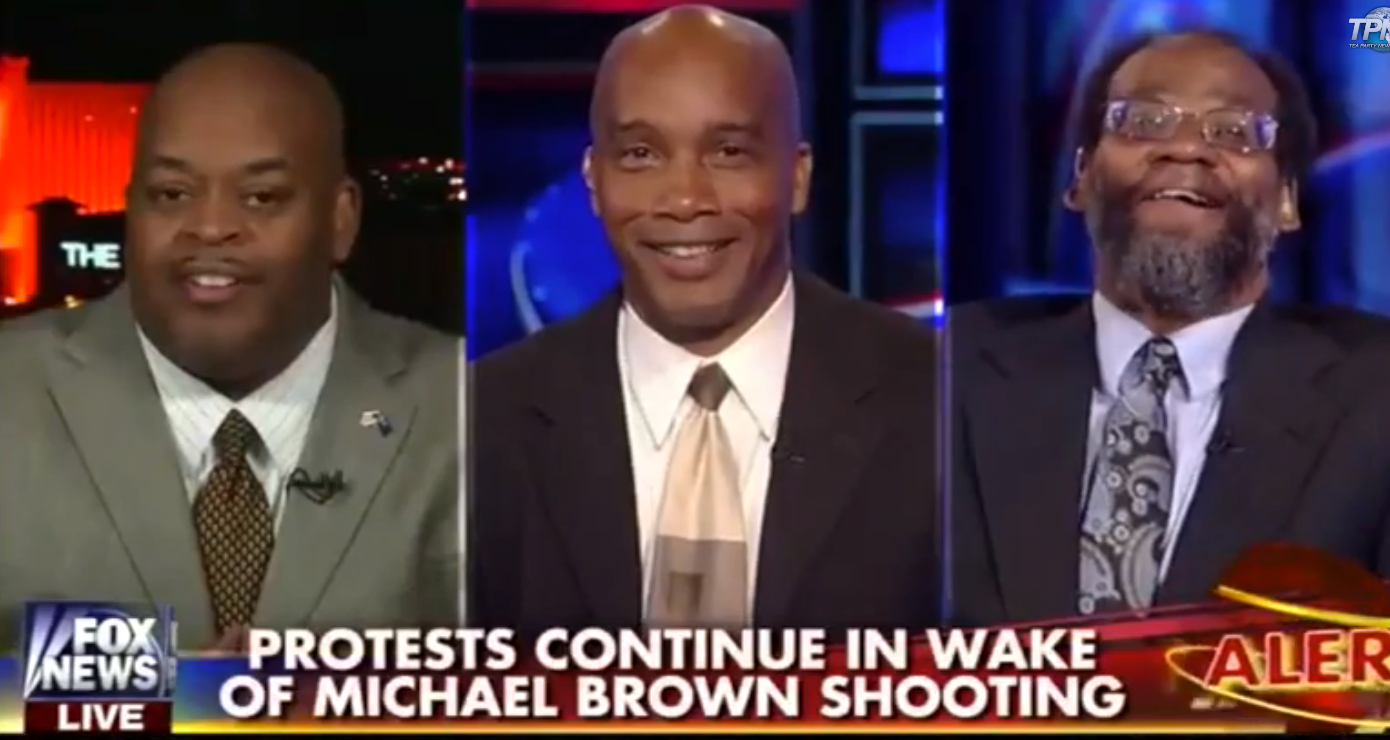 Sean Hannity assembled a trio of some trusty African American, black attackers last night to blame the Ferguson protests on President Obama. Obama, one of them said for extra race-baiting points, is “nothing more than Al Sharpton with a Harvard degree.”

Hannity began the discussion with the phony question, “Are these civil rights figures helping to calm the situation in Ferguson or are they stoking the flames of tension in an already restless community?” As if the choice of his three guests – Niger Innis, Kevin Jackson and Mike Meyers - didn’t pre-script the answer.

Furthermore, Hannity didn’t care about “stoking the flames of tension” from his television studio. Otherwise, he would have hosted guests without such penchants for making inflammatory attacks on African Americans.

“I am a liberal,” Meyers began. Then he launched into a racial diatribe President Obama and Attorney General Eric Holder:

I can tell you this about the situation in Ferguson. This is a failure and a crisis in leadership. It starts with the empty-suit-in-chief, Barack Obama, who racializes every incident between a cop or wannabe cop and a civilian.

“Why doesn’t he talk about Chicago or New York?” Hannity piled on. To which I say, “Why don’t you?” You’ve got a one-hour show five nights a week. Where’s your coverage of this important issue? Or is your only interest in using it as a club against African Americans?

“Liberal” Meyers moved on to racially attack Holder as “another empty suit” who has “transformed the Justice Department into a factory of palliatives, directed for ‘just us.’”

Hannity worked in a little fear mongering over the New Black Panther Party. He played a clip of a small group of protesters saying they want the police officer who shot and killed Michael Brown dead. Deplorable, yes. But why focus on this fringe element if not to demonize and yes, inflame racial tensions? It’s one of Hannity’s favorite tactics, by the way.

Innis got in his racial digs: "Jeremiah Wright, Michelle Barack Obama, Louis Farrakhan, Jesse Jackson, Jr., who’s a former congressman, Jesse Jackson, Sr. What do all these people have in common? They are part of the black elite and power elite… of Chicago, Illinois."

As if private jet traveling, two mansions and a luxury condo owner Hannity isn’t an even bigger elite.

Innis laughably claimed that the “some 5,000 killings in Chicago” since 2001 had occurred “under their leadership” as if Obama, et al. were personally responsible. “Black life does not lose its value because it’s taken by another black,” Innis sneered.

Then, as the segment was closing, Innis took another racial swipe:

“You have a president of the United States that was elected to bring us together as a nation. He’s been nothing more than Al Sharpton with a Harvard degree.”

Watch the race baiting below.

ANY black leader worth his salt will tell you that Obummer has done very little for the American blacks..so he pretends to throw them a bone with his supposed support