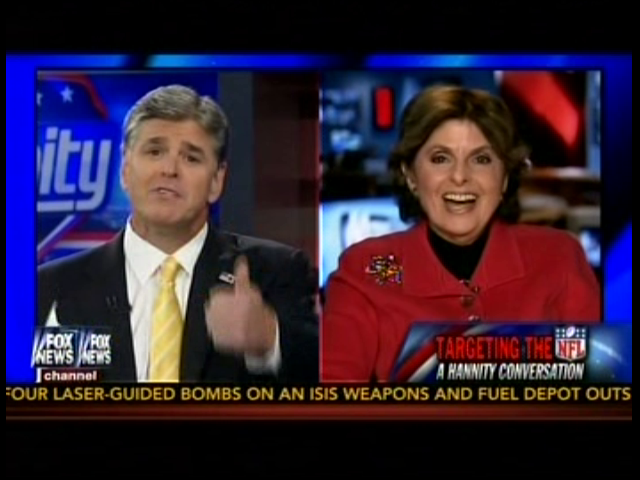 Sean Hannity defended the NFL and Commissioner Roger Goodell in a debate with attorney Gloria Allred last night by arguing, in effect, that Goodell is better than Obama.

Hannity devoted the full hour to what the show called a “conversation” about “TARGETING THE NFL” last night. It was based on Goodell’s press conference earlier in the day in which he discussed the wave of domestic violence scandals that have swept the football league.

In this segment, Hannity argued with Allred over her call for Commissioner Goodell to resign.

Allred argued that the victims of violence by NFL players have been denied their due process because they have been excluded from NFL investigations. “What we’re saying is, don’t sideline the victims, don’t ignore the victims. Reach out to the victims, give them an opportunity to be heard,” she said.

Hannity insisted he was not Goodell’s “special pleader here” (despite the title of the show) but nonetheless argued that Goodell had admitted wrongdoing and promised new policies to deal with the problem of domestic violence and abuse. “Everything that you’re asking for he’s now addressing,” Hannity continued. “And you seem to not want to give him any credit for it.”

Then, just to show how much credit Goodell really deserves, Hannity added, “And, by the way, you’re an Obama supporter. When has Obama ever said he’s wrong?” There was laughter off screen. “He blames kiosks, ATM machines, me, Rush, Levin, Fox News – you know.” Hannity made a shrugging gesture. Hannity continued, “I thought Goodell stood up today and took the blame and said he’s going to fix it.”

In case you were wondering how Fox News would use Goodell’s press conference against President Obama.

Antoinette commented 2014-09-21 13:56:04 -0400 · Flag
Joe, Hannocchio’s son Jr. is a mediocre tennis player. When he’s not in school he’s out playing in tennis tournaments around the state, and out-of-state, and taking private lessons from Johnny Mac. The boy is a good kid who, unfortunately, has an unhinged, no-good father. It’s too bad Michael W. Smith wasn’t around during the 80s and 90s in Huntsville. Family life would be very different today for the kids, and Merri Jill would still be writing for a local publication, and not move around every five years because the current home is not good enough for the demanding idiot.

We think he is suffering from mid-life crisis. He has this thing for young blonde girls. We bet he would latch on to them if MJ wasn’t in the picture. But then again, he would probably still latch on to them anyway.

To this day, we are suspicious of his trip (s) to the brothel in Nevada. Mull this over carefully. Why would a pimp allow a “host” to come to his ranch and talk his girls into quitting their jobs as prostitutes? That does not make sense. Something went on down there, and we doubt it was for a story.

He also gives free publicity to a man who runs a business which married men talk to other anonymous women. He gave this guy free publicity on his radio show. We wonder what Hannocchio got in return. He’s not talking.

As they say in the south, Bless his wicked heart.

He’s been in verbal altercations in the past, including with a radio colleague in Atlanta and Santa Barbara.

He flies off the handle very easily, especially if you talk about him on other shows. Psst…refer to him as Hannie Pie when talking on the air.

Hannocchio has no problem defending athletes who abuse their wives, girlfriends, and children. But let an athlete abuse his “baby doll” and all hell will break lose. We can safely say that Hannocchio would beat the living crap out of the guy, and demand the league terminate and prosecute the guy.

“Hannie Pie” loves verbally cutting people down. He’s been doing it for decades. Makes him feel superior. But in reality, he’s a weak man with major internal issues.

Aria Prescott commented 2014-09-21 02:10:42 -0400 · Flag
I’m no fan of Allred, but what Hannity said was stupid. Obama never apologizes, or takes accountability for himself? Bull and Shit. When Obama messes up, fixing it becomes his top priority. Compare that to Bush, who responded to everything he got caught in with “Make me feel sorry!”…

Oh, wait- Hannity said that criticizing that was treason.

Joe Marsh commented 2014-09-21 01:04:21 -0400 · Flag
I felt like a little punishment Friday afternoon, so I tuned in Slanthead Hannity. He devoted almost the full first hour (except for a long commercial break) of his radio wasteland to carrying, live, Goodell’s news conference.

After reading Ellen’s post here, it’s obvious that Hannity was on a major rehab mission for Goodell. This is especially obvious since so many others in the media, sports world, etc., have strongly panned Goodell’s statement and answers. Here’s just one example:

It’s actually no surprise at all that Goodell meets with Hannocchio’s approval. After all, it’s only a little off-field violence. It’s football, folks!

Now, to be clear, I’m not suggesting that Slanthead would ever strike his wife or kids. He’s said, out loud, that he believes it’s wrong for a man to hit a woman under any circumstances.

But hey, maybe he abuses his family verbally? Maybe he browbeats his wife and kids? Maybe the same way he browbeats and tries to humiliate any guest on the air who doesn’t agree with his trash Obama agenda? Antoinette would know more about that.

It’s my understanding that Hannity made his wife give up a promising journalism career in order to marry him. And he has said, publicly, that he expects her to fetch his slippers after a hard day in front of the microphone browbeating and besmirching others. Could he also force her to maintain his arsenal… field stripping, cleaning and oiling his multiple AR-15s and Glocks?

Slanthead insists he’s become a major tennis fan and player(?) in order to keep up with young Patrick. But maybe he secretly wishes his son hadn’t wimped out for the courts and instead picked up a football like a real, red-blooded American?

Tennis wouldn’t be so bad if Hannity’s son had a loud mouth and the browbeating talents of a Johnny Mac, but that’s only in Slanthead’s dreams!

If I were psychiatrist I would say that all the Fox hosts have an unhealthy obsession with President Obama.

Wayne Lester commented 2014-09-20 13:15:06 -0400 · Flag
Sean Hannity
Spoken like a true racist and child/ wife abuser.
I understand that its not your fault that your mother is also your sister… that you have to rotate the tires on your home every year… and your home movies were turned into a movie called deliverance… but Ill give you this though…your little brother plays a mean banjo.

Wayne Lester commented 2014-09-20 13:13:02 -0400 · Flag
The NFL players in the article below (except Greg Hardy) are still playing even after being arrested for domestic violence… What does this say to our women and children?…What does it say about American morals?

It is time to tell the nfl that placing greed before the welfare of women and children will not be tolerated in our society (nor will covering up such dispicable acts) … Boycott the nfl by boycotting all corporations that advertise during nfl games… Do it for your wives… do it for your children… do it for the morality of America.

The NFL is a disgrace to the fabric of american morals and the human race… A money hungry morally corrupt monopoly played by millionaire wife/ child / animal abusers, rapist, steroid users, murderers and pretty boys who have hung up their jock straps for dresses while trying not to damage their million dollar peticures.The NFL (National Felons League) is damaging to the reputation of America and a shameful role model for our youth. It is time for a new football league to emerge so that we can end this corruption of American morals… called the NFL.

NewsHounds posted about Hannity Defends NFL and Roger Goodell – Because Obama on NewsHounds' Facebook page 2014-09-20 12:38:34 -0400
In case you were wondering how Fox News would use Roger Goodell's press conference yesterday against Obama.