President Obama made some surprise remarks today about Trayvon Martin and the George Zimmerman case.  The speech was sensible, restrained and considered. But somehow, talking about his own experiences being racially profiled and saying that protests should be peaceful sent Todd Starnes over the edge. He went racially ballistic on Twitter over it. Including a tweet saying that it "justified" his comments earlier in the week, that Obama is "trying to tear our country apart."

You can watch President Obama's comments via YouTube below. And you tell me what was so terrible that it engendered the following tweets from Starnes' Twitter account: 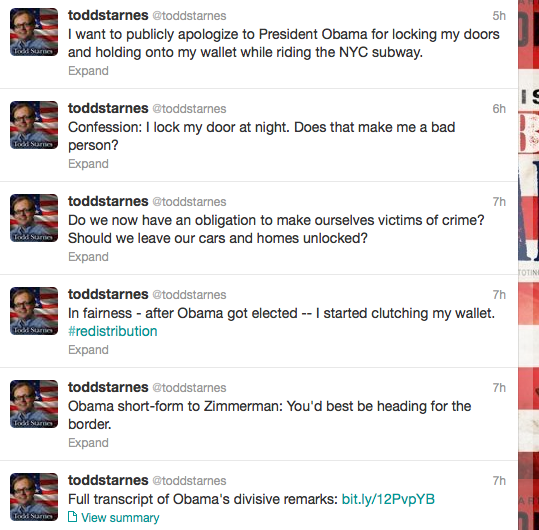 Kevin Koster commented 2013-07-20 13:46:11 -0400 · Flag
The simple fact is that the President made some thoughtful and heartfelt observations about the case, to speak to the millions of people in this country who have concerns about the issues it raises. The President did address black-on-black violence during his comments, and it was refreshing to hear him speak simply and frankly to these matters.

Of course, the Fox News “Line of the Day” afterward was to immediately attack him. Now, if he had said nothing, the Fox News Line would have been to attack him for NOT saying anything. (“Where’s Obama? Why doesn’t he act like a leader?”) It’s nice to know that Fox News is at least consistent in this regard.

truman commented 2013-07-20 09:56:09 -0400 · Flag
As I watched our President’s remarks yesterday, I knew two things were certain:
One, our President’s observations would be thoughtful, calm and incisive. His personal anecdotes about experiencing racism were particularly poignant.

Two, Fux Noise would immediately distort the President’s words into some race-hatred diatribe.
If your stomach can tolerate it, take a tour of the Fux Nation cesspool of hate. Three of the lead posts are vicious attacks on President Obama’s speech. The venom from girly-man Levin is particularly vile.

d d commented 2013-07-20 09:22:15 -0400 · Flag
Exactly, mj – apparently it’s lost on Starnes that he and those on his own network are blaming Trayvon for his own death (as in a black male walking while wearing a hoodie should expect aggressive/deoadly action used against him). Looks like Starnes needs to take Greta’s advice and put a lid on it as he’s only stirring up hostility, hmm?

Hell, even one of the women who got on the jury (juror B76, a white woman – prosecution’s attempt to strike her as biased was denied by the judge) asked during the selection process why Trayvon was out late (clearly insinuating that his being out late automatically made him suspect). Never mind the actual fact that Trayvon was seen at the convenience store at 6:24pm and shot at 7:16pm (which doesn’t even come close to qualifying as “late”).

And, while doing the google to find which juror # actually made the insinuation about Trayvon’s being out late, I came across the same sort of statement made by juror B37 in her Anderson Cooper interview (which I have not heard in its entirety). This whole thing about Trayvon supposedly being out late which, apparently makes one suspect as being a thug (and worthy of being stalked by a vigilante with a gun) speaks to a dangerous and racist mindset that FOX “news” is not discussing. Nah, the FOX “news” talking/tweeting heads would much rather attack the African-American community and the President than talk about the tensions and hostilities being perpetuated by their own network.

Sean Hannity reacted to President Obama comparing himself to Trayvon Martin in typical fashion on Friday.

“Now the president’s saying Trayvon could’ve been me 35 years ago,” Hannity said on his radio show. “This is a particularly helpful comment. Is that the president admitting that I guess because what, he was part of the Choom Gang and he smoked pot and he did a little blow — I’m not sure how to interpret because we know that Trayvon had been smoking pot that night.”

Ray Michaels commented 2013-07-20 07:40:29 -0400 · Flag
WHY does FOX pundits COMPLETELY IGNORE that George got out of his car and initiated the CONFRONTATION that led to his alleged beating on the sidewalk and in addition after he had been INSTRUCTED NOT TO GET OUT?? Every parent in the world WARNS their kid that DANGER IS PRESNT WHEN THEY ARE BEING FOLLWOED BY SOME GUY IN A CAR!! We do not know what George’s opening words were to the boy! But I suspect they were not , “Hello young man are you lost can I help you?” If some guy followed me in car and got out and approached me I would think this is some PERVERT WHO IS GOING TO TRY SOMETHING! At that point I would belt him one if he came near me! But all of this is IGNORED AT FOX to further their OBVIOUS racial bias agenda!

I was moved to tears by his accounting of living in a white society. I heard him say words of unity and remaining calm and peaceful. I guess in Bizarro-Faux world that means the exact opposite. Tearing our country apart are tweeted rants like Turds. In a word: Nauseating.

NO, YOU F*CKING DIPSH*T — that’s what FOX is saying:

Not to be off-topic, but Fox tried to get Robert Zimmerman to say something about about the president’s speech, but he declined.