Fox Wants You To Think Trump's Birther Questioner Was A Plant 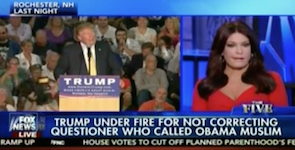 Fox does not want to admit the truth: that lots of Trump supporters and Republicans, in general, are birthers. And it's at least partly thanks to Fox News.

As Donald Trump has come under fire for failing to refute a birther's racist assertions during a campaign Q&A, Fox News is doing damage control by trying to camouflage the extent of such views among their own.

As Media Matters notes, at least three different Fox News hosts, Brian Kilmeade, Kimberly Guilfoyle and Eric Bolling, have opined, without evidence, that the now-infamous birther questioner at a Donald Trump campaign event was a plant. (We also caught host Greg Gutfeld doing the same.) But as Media Matters also points out, a recent poll show those views are rampant in the GOP, especially among Trump supporters:

According to a September 1 survey from Public Policy Polling (PPP), nearly two-thirds of Donald Trump's supporters believe President Obama is a Muslim, and 6 in 10 believe he was not born in the United States. Such fringe beliefs are not solely held by Trump supporters, a majority of Republican respondents also believe the president is a Muslim...

What's even more disingenuous and cynical about Fox's attempt to distance themselves from birthers is that Fox News played a very active part in promoting what they should have known was bogus birtherism in the first place. And even after Trump was completely discredited on the subject, Fox continued to give him undeserved credibility.

On The Five on Friday, all of the cohosts "forgot" about their own network's role in legitimizing and promoting birtherism. In fact, Gutfeld falsely claimed "Hillary started the birther movement." He misleadingly added, “We have people who have voiced similar sentiments and changed their minds."

Four of the five cohosts opined that the questioner was not legit. “I swear Jimmy Kimmel is behind this,” Gutfeld said. Cohost Geraldo Rivera added, “No, Howard Stern, man.” Guilfoyle called the questioner “a complete plant.” She continued, “It was a setup, it just sounds fake.” Bolling chimed in, “It was almost comical the way that was delivered.”

To her credit, Dana Perino questioned the meme. She said the question echoed "things that you see online all the time."

One other thing? According to The Hill, a second audience member agreed that Obama "is a Muslim born abroad," which Trump failed to refute.

Watch the Fox News snow job below, from the September 18 The Five.

scooter commented 2015-09-21 14:00:42 -0400 · Flag
This is just too much. When confronted with their own culpability, FOX quickly blames the other side. Sickening, disheartening, and utterly unsurprising.

Eyes On Fox commented 2015-09-21 08:03:04 -0400 · Flag
Yeah, I’ve witnessed a number of Fox News clowns like the curvy couch crowd on “Fox & Friends” speculate this poster child of conservative Archie Bunker-isms is a liberal plant. In fact, as I type this ‘weather guy’ Steve Doocy is asking The Donald this very question.

The good news is Fox News which once nurtured this sort of bigoted stupidity – recall all their fear-mongering Obama attended a “madrasa” – is afraid to go there any more.

Fox News is a clearinghouse of right-wing conservative hate radio. Usually they are expert at mainstreaming right-wing extremism. The Obama is a radical Muslim meme not so much. However, this idiocy is pervasive in the Republican party as pointed out by polling. Trump, in answering Doocy’s question, points out a lot of people in the crowd were nodding in agreement when the dude dropped his town hall bombshell. For the record, Trump doesn’t think the guy was a plant (subject to change without notice).

However, Fox News right-wing propagandists can still smear Obama as being suspect regarding his anti-American Muslim sympathies. Sub-genius Elisabeth Hasselbeck just informed the fanboy droolers Ahmed Mohamed, the kid arrested for bringing a homemade clock to school, can blame his arrest on (you guessed it) our president.

Seriously. The hypocrites who incessantly whined about “blame Bush” liberals can connect Obama to any negative news story. Elisabeth’s (il)logic? Obama is unable to call Muslim’s terrorists so Americans can’t somehow separate the innocents from the bad ones now.

What I find interesting is how influential Fox News’ propaganda is. They’ve been running continuous smears of rival CNN’s GOP debate. Following the debate, Trump was boasting how great it was. Today on Fox News he’s flipped (surprise, surprise) and is telling the curvy couch clowns how much he thinks it sucked.

Don’t expect the idiots glued to Fox News to pick up on any of this. Just tell the fanboys what they want to hear and they’ll believe any idiocy, any inconsistency.

Ray Michaels commented 2015-09-21 06:47:40 -0400 · Flag
Want to make America GREAT AGAIN then how about stop using CHARACTER ASSINAATIONS to describe our leader?? Seems pretty un-patriotic to me! Fair game is to disagree with policies if you wish BUT not making up a bunch of BS about the person. That is so JUNIOR HIGH TACTICS! Let’s remember too dear friends across the aisles," IT IS A POOR SALESMAN THAT NEEDS TO TEAR DOWN ANOTHER GUY’S PRODUCT TO SEEL YOUR OWN!"

Ray Michaels commented 2015-09-21 05:49:04 -0400 · Flag
FOX track record on spotting planted questions has not played well at all! Like when Palin was asked what she likes to read?
Even if Trump’s latest fiasco was a plant, which I am sure it was NOT, why would he feel NO obligation to correct false assumptions which he KNOWS ARE FALSE? Fear HIS admiring audience would turn on him with a chorus of BOOS? FOX will ALWAYS PROVIDE AN EMERGENCY PARACHUTE TO RESECUE ONE OF THEIR OWN!
Now if a Republican plant asked Hilary Clinton a question on her email server at a TOWN HALL she was doing and she failed to answer THEY WOULD BE ALL OVER THAT WITH HOW THAT WAS A FAIR QUESTION AND SHE DODGED IT!!!

Well, Mr Ed, you might want to remember tRump’s MAJOR role in the birther movement before pulling any shit about “tRump refused to be rude.”

Rudeness is tRump’s very lifeblood. The only people who don’t get his rudeness directed at them are the people with whom he agrees.

Now, go back under your bridge.

Ed Bradford commented 2015-09-20 22:15:49 -0400 · Flag
If Obama won’t defend America’s excellence, what duty does any America have to defend Obama? Obama refuses to enforce the law. Trump only refused to be rude. Take your pick.

LauraJane commented 2015-09-20 21:38:27 -0400 · Flag
I don’t take this lightly. Reminded me of O’Reillys denial of any instigation of Dr. Tiller ’s murder. They get away with doing this every time – despite the existence of tape. How are they allowed to get away with no culpability. Until there is, things will get worse. If it was Europe they would be shut down or possibly even charged.

NewsHounds posted about Fox Wants You To Think Trump's Birther Questioner Was A Plant on NewsHounds' Facebook page 2015-09-20 18:23:19 -0400
Fox tries to avoid the truth about their own Frankenstein.