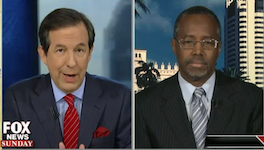 After the Republican brand has come under scrutiny for looking anti-science because of some anti-vaccination comments in the wake of a measles outbreak, Fox News Sunday trotted out Dr. Ben Carson in a blatant effort of rebuttal. The only problem? Fox ignored Carson’s other anti-science stances.

Republicans who would prefer to be aiming their fire at President Obama and presumptive Democratic nominee Hillary Clinton instead found themselves debating whether or not parents should have to vaccinate their children for measles and where to draw the line between public health and parental choice.

…“I’m a little shocked that we are having a discourse about the efficacy of vaccinations,” said John Weaver, a moderate Republican strategist often critical of the party’s conservative wing. “It’s a shocking development. Our party has a reputation that’s grown as being anti-science, and now we’re going to be anti-public health?”

Not to worry, Republicans: Fox News has your back, as you probably well know.

Well, maybe not Senator Rand Paul’s back so much. Although Fox would almost certainly unite behind Paul if he were to become the Republican nominee, he’s not the first choice. Otherwise, host Chris Wallace would not be opening a discussion by playing a clip of Paul’s comments questioning vaccines and all but pushing Carson into attacking Paul.

WALLACE: Dr. Carson, you have been reluctant to criticize the senator. You say he’s a reasonable person. But let me put this differently. Is that a reasonable statement?

Neither is Carson Fox’s first choice, in all likelihood. But he makes a great poster child for the “Republicans love science” cause. For medicine only.

Carson talked up “the science behind vaccines” and the “tremendous progress in eliminating some devastating diseases over the decades.” He also said, “Information was disseminated inappropriately, anecdotal in nature about terrible side effects from vaccinations and all of that has been carefully investigated and debunked.” Carson compared vaccinations to mandatory seat belts and prohibitions against texting while driving. However, he didn’t take any direct swipes at Paul.

Nevertheless, Wallace made a point of underscoring Carson’s scientific mindset in a political context.

WALLACE: Dr. Carson, I mean it’s interesting. Because you are talking about this in a very clinical, very scientific way as a noted brain surgeon would. Some Democrats, though, say that there’re some elements in the Republican Party, both candidates and voters, who deny science, whether it is vaccinations, or climate change or evolution. Do you think that criticism is fair?

Of course, Carson didn’t think so. And he took the hint by pointing out Democratic pockets with low vaccination rates (but named no actual politicians or public officials). He never mentioned climate change or evolution.

But as Crooks and Liars points out, Carson is quite the science denier on those scores. On global warming, he is not convinced (“We may be warming, we may be cooling”). He is also a Creationist who rejects Darwin’s theory of evolution.

Rather than press Carson on those subjects - that Wallace, himself, raised - he moved on to discuss Carson’s 2016 political fortunes – in some of the friendliest terms imaginable. In fact, Wallace came right out and called himself a friend.

Wallace: I want to talk, now surprisingly, some politics with you. You say that some people have been brainwashed that they think that only politicians can run for office and I wonder when you said that whether you were thinking about me, because as you know I’ve raced with you, we’re friends. The questions about your prospects in running for president and I’ve got to say you have proven me wrong. We’re going to put up two recent polls. The latest Fox News national poll, you are in fourth place behind Bush and Huckabee and Paul, but ahead of a whole lot of other people. Then let’s look at Iowa, where you are in fourth place, but you are running ahead of Jeb Bush and a bunch of senators and governors. So, and I say this is a bit of a mea culpa, Dr. Carson, why are you connecting with voters?

Can you imagine the uproar from Fox and Republicans if a Sunday anchor like Chuck Todd or George Stephanopoulos told a potential Democratic candidate, “we’re friends?”

Watch it below, from today’s Fox News Sunday.

Joseph West commented 2015-02-09 03:39:27 -0500 · Flag
Andrew, you don’t know enough about GOOD science to be arguing what constitutes “bad” science. The planet (living or dead) does NOT “inhale or exhale” anything—much less a climate. The fact that you would make such an idiotic comment shows that you don’t know jack squat about climate science.

You also don’t seem to know anything about evolution. Here’s a hint, though: IF evolution is possible on the micro scale (and many “creationists” actually accept this since viruses and bacteria PROVE that microevolution is not merely possible but fact), then it’s equally possible on the macro scale, meaning that apes and humans share a similar ancestor. (Additionally, consider how DNA evidence easily disproves BOTH creation stories in Genesis. The first story doesn’t explain how man is actually created, aside from “Let us create man in all own image . . . male and female, created He them both” but the second story uses the old created from clay/dirt. Well, soil does NOT contain DNA in and of itself. Any DNA found in the soil came from dead animals. But, per this account, man was created BEFORE the animals so there couldn’t be any DNA in the soil from which Adam was created. And yet……..humans share a significant amount of DNA with a vast majority of other animal species and even a large number of plant species. But DNA, being a fairly fragile thing, is subject to any number of mutations—which is why evolution works as a theory.)

Joseph West commented 2015-02-09 03:24:45 -0500 · Flag
“Can you imagine the uproar from Fox and Republicans if a Sunday anchor like Chuck Todd or George Stephanopoulos told a potential Democratic candidate, “we’re friends?”

We know that’ll never happen. Todd is a GOP toady/lackey and Stephanopoulos is too professional to admit on-air being friends with any guest (or even to make an on-air suggestion that he’s friends with a guest).

But, to the hypothetical, yeah, there’d be so much typical outrage and calls for the person to be fired Even as FoxNoise maintains a bunch of liars, prevaricators and distorters on its payroll and, seemingly, pays them more for the number of on-air lies they can get away with.

Elemental Fraction commented 2015-02-08 20:58:13 -0500 · Flag
fox news anti-vaccine rhetoric combined with fox news anti-affordable care rhetoric and we now find out who the real death panels are. i hope all those unvaccinated fox news viewers don’t take a free ride on those of us who pay for insurance and have been vaccinated for years.

Erich Pomfret commented 2015-02-08 19:33:36 -0500 · Flag
Andrew Boydston: You might want to fine tune your support for Dr. Ben before going public. You started out fairly well, but as soon as you referred to Evolution as “Bad Science,” you exposed yourself as someone barely worth even the time it’s taking me to respond.

Andrew Boydston commented 2015-02-08 19:15:59 -0500 · Flag
Dr Carson is not Anti Science as the liberals would like to point out, as often as they can over climate and evolution. The more correct position is that he is against “Bad Science” and is not definitely anti-science at all. In my own journey through science education it was admonished against, “stating a theory” (Global Warming/ Evolution) and then proceed going after supporting evidence for a stated theory. Dr. Carson doesn’t believe in that kind of Bad Science, and he is not at all anti-science. His belief in creation is his belief in creation. His understanding of weather is not built on many connecting weather and climate assumptions supporting global warming theory. A live planet may inhale or exhale its climate over thousands of years from external cycles, solar change, or a combination of internal conditions. One of which, is man, who may be one of those many contributions affecting climate but not the sole contributor.

truman commented 2015-02-08 17:31:18 -0500 · Flag
The token candidacy of Bonehead Ben allows teabagging Repugs to falsely claim they are not racial bigots. But when the actual voting starts in the Repug primaries, Bonehead will quickly disappear as a viable candidate and return to the filthy lucre of a paid Fux Noise contributor.

Aria Prescott commented 2015-02-08 16:55:22 -0500 · Flag
Fox News also felt fit to ignore that other networks asked him how he could be for vaccinations, yet trying to score political pointswith the people opposed to them.

Probably because Carson blows that question off, and actually lost it with CNN’s Cuomo when he refused to let the good doctor off that hook. I bring this up, because I have a serious interest in hearing why Carson’s for vaccines on the science, but walking on whatever side has greener grass that day for him politically. Preferrably out of his own mouth.

But I know we ain’t ever seeing that on Fox, if we see it at all. If anything, I’m shocked they aren’t calling for Cuomo’s head yet, entirely because he’s the best attempt at that answer to date.

NewsHounds posted about Fox Turns To Dr. Ben Carson For GOP Vaccine Rehab on NewsHounds' Facebook page 2015-02-08 16:34:12 -0500
Also, "objective" host Chris Wallace announced, "We're friends." Can you imagine the outcry if a Sunday host said that to a Democratic candidate?