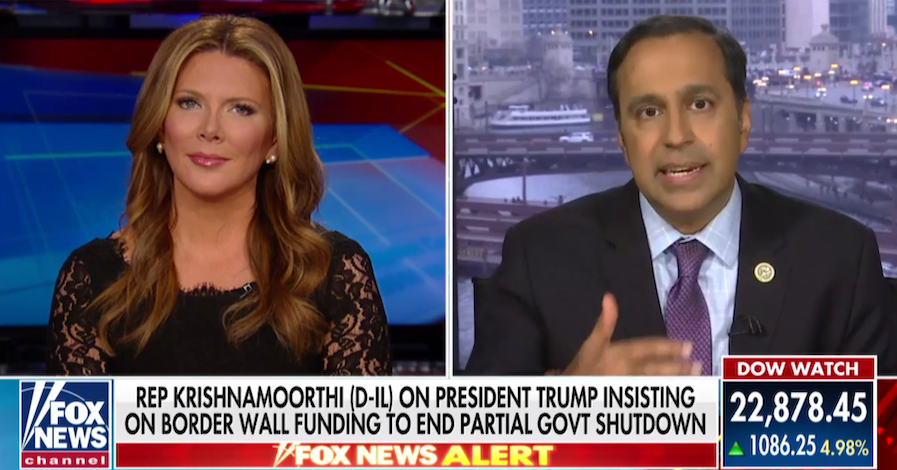 After two migrant children died in U.S. custody, Fox host Trish Regan used the tragedy not to question their treatment but to suggest their deaths were the Democrats’ fault for not funding a border wall (that Donald Trump promised Mexico would pay for).

Yesterday, Rep. Raja Krishnamoorthi (D-IL) debated Regan about the wall and the government shutdown. Sadly, he never called out her propagandistic tactics, thus enabling them to pass as legitimate.

However, Krishnamoorthi seemed to be there in the hope of floating a solution to the government shutdown over the wall. After correctly noting that the majority of Americans don’t want a wall and that even more don’t view it as a priority, he added, “I think the president and Democrats should come together on some enhanced border security, and then fund the government. That’s what the American people want right now.”

Krishnamoorthi also said that border-state lawmakers, including Republican Rep. Will Hurd, say a wall is unwise, ineffective and wasteful. “Remember, it’s not the Mexicans who are paying for it,” Krishnamoorthi added, getting in a dig.

Oops! Regan did not want to remind her viewers that Trump promised Mexico would pay for the wall. “All right, Congressman,’ she interrupted. “So you just had me on the path of, like, something could get done here, right? That you believe in enhanced border security. … Now you’re saying you don’t think that the wall works. So which is it?”

Krishnamoorthi stuck to his guns. “I think that enhanced border security can come in the form of more manpower, the greater use of technology, repairing existing structures where they might be in disrepair. But a 20-foot, 2000 mile wall is not going to work.”

“It sounds like the shutdown’s gonna keep going, then, because you’re gettin’ back to the issue that so many Democrats are really stuck on,” Regan groused. Then she suggested that the “symbolism” of a wall could have saved the lives of the two migrant children who recently died while in U.S custody.

REGAN: When you create a scenario that makes it easier for people with children to come here and seek asylum, well, what do you know, you get more and more kids coming here.

And so you are putting them in harm’s way. You’re—you are making a more dangerous situation for these families. If you have a wall, does that symbolically send a message that might actually work in some ways as a deterrent, so, hopefully, those kids are not put in that position to begin with, sir?

This was an outrageous exploitation of tragedy but Krishnamoorthi let it go by and went back to arguing that the wall is ineffective.

But clearly, Regan’s real concern was in promoting Trump’s demand for a wall. She never put forth a single fact or statistic indicating a wall would be effective or wanted by Americans. So she further blamed Democrats for opposing it. “Isn’t it up to you guys to find some kind of negotiation strategy so it all does get done?” she “asked,” conveniently forgetting that it was Trump who sabotaged the bipartisan spending bill that would have kept the government open.

Watch Regan use the deaths of children to promote Trump’s unwanted wall and divisive politics below, from the December 26, 2018 Your World.

Kevin Koster commented 2018-12-28 12:24:26 -0500 · Flag
I’m going to decline to give Regan credit. She was playing fairly sneaky games throughout this segment, not to mention the rancid discussion she referenced with racist Jessica Vaughan of the Far Right anti-immigration FAIR outfit.

Regan is trying the tactic of playing the Democratic Party as being somehow equally unreasonable to the angry Right Wingers who pushed this nonsensical confrontation to where it is today.

To be very clear – there is no mandate for American citizens wanting a bigoted, nonsensical wall structure built. There is a small minority of loud and angry Right Wingers who want it as a giant middle finger to Mexico and to the rest of the world. The point is not to actually stop anyone from getting to this country – it’s just to tell everyone from south of the border to go jump in a lake. And the cherry on top of the vicious sundae was supposed to be the Pence White House forcing Mexico to pay for it. (This is the old schoolyard bully routine, where the tougher kids beat up the other kids and then take their lunch money to boot.)

Regan’s discussion with Vaughan was specifically intended to run the Right Wing narrative of mock concern over families fleeing toward the US from the south – the notion that it’s the families’ fault that they are fleeing and thus not the US’ problem that these kids are dying. I particularly noted Regan’s constant trolling of those families with the line that “there’s no point in your coming here since we won’t let you in. You might as well turn back or just stay in your countries.” The narrative lying just underneath that mock concern actually reads “We don’t want you here! Go away and stay away!” I’ll note that Vaughan’s racist group openly advocates for greatly restricting the numbers of immigrants allowed to come in through the Mexican border.

I’ll also note that the angry Right Wingers are currently celebrating a major coup for them – they were able to bully Mexico into processing asylum seekers on the Mexican side of the border. This has long been a bucket list item for the Right – to force Mexico into setting up these unlivable camps on their side. Because it does three big things. The biggest idea is that by keeping the asylum seekers in Mexico, this denies them the ability to actually get to the US, thus essentially closing the border and sending a message that there is no sanctuary here. Beyond that, this sets up a miserable tent city situation in Mexico that would be just as unlivable as the conditions these refugees will face elsewhere in Central America, which is another deliberate negative message for them. And finally, by keeping the human tragedy in Mexico, this will allow US media to completely ignore what is happening – since we won’t be seeing footage of kids held in US detention facilities and the problem will be in Mexico’s hands. Out of sight, out of mind. (And let’s not forget that the recent deaths of the kids are seen as big positives by angry Right Wingers – their hope is that Central American families will think twice about even trying to come to the US now – since it’s clear that this country will do nothing when immigrant children die in custody.)

Given the cheerleading from Fox News throughout this week (and the nonsensical idea that this stalemate is because the Democratic Party wants to “deny Trump a victory”), it’s no surprise that the Pence White House’s spokesman had another massive tantrum on Twitter this morning. His latest is that he’s threatening to close the border and block all aid, etc etc blah blah blah. I’d say just have him go ahead and try it. It’s frankly tiring to listen to these childish outbursts. I don’t believe any adult in the world is particularly impressed by them.

The proper response by the Democratic members of Congress should be to completely ignore the nonsense of Pence’s spokesman and just have the House pass a budget bill akin to what unanimously passed the Senate before this child walked away from his commitments. Not one penny for this racist boondoggle should be permitted – it has nothing to do with security and everything to do with the child in the White House needing to be taught his lesson. If he wishes to stomp his foot and not approve the budget, then it’s on him – as he already announced it would be. Or he can go get the money from Mexico right now. Or angry Right Wingers can try their crowd-funding idea – at their current rate, it will take them nearly 25 years to pay for a good start on it. (And I seriously wonder if angry Right Wingers around this country are sitting on 25 billion dollars in the first place…)

The most interesting statement here was Trish saying the wall is a “symbol” because isn’t that really the point? Effective or not, it’s like putting up a sign “Immigrants are no longer welcome in America”. It’s a symbol of America’s growing intolerance and hate. Once built it will be a stain on America transcending generations.

Jon Benedict commented 2018-12-27 18:13:01 -0500 · Flag
ob·fus·ca·tion
/ˌäbfəˈskāSH(ə)n/
noun
noun: obfuscation; plural noun: obfuscations The action of making something obscure, unclear, or unintelligible. Obfuscation is the obscuring of the intended meaning of communication by making the message difficult to understand, usually with confusing and ambiguous language.

“when confronted with sharp questions they resort to obfuscation”