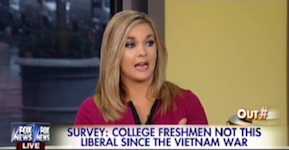 Fox News’ Katie Pavlich just can’t stand the fact that American millennials are liberal. So she tried to explain it away by smearing young people as brainwashed dopes.

On Outnumbered, cohost Andrea Tantaros announced that a UCLA survey found that college freshmen are almost as liberal now as they were when the Viet Nam war was winding down in 1973. 33.5% identify as liberal or far lefts vs. 21.6% as conservative or far right, she said.

Pavlich jumped right in with just the kind of mean-girl rhetoric we have come to expect from her:

PAVLICH: I think it’s interesting that the numbers are so similar to the Viet Nam war. Because who do you think has been teaching the generations coming up since the Viet Nam war? The same people who were protesting the Viet Nam war, the far left radicals who grew up in the 60s, into the 70s. They’re the ones who’ve been in the education system. Not just at the college level, but starting in kindergarten, that’s where it starts. But I do want to say although young people lean left, there are some conservative young people doing very good things.

…So I would say going into college, they’ll either be more liberal when they leave or they’ll get out and get their job and see their taxes taken out of their paycheck and maybe go a little more conservative.

Besides Pavlich’s over-the-top hatred for America’s education system, she was also essentially arguing that America’s youth are too stupid to think for themselves. Not surprisingly, none of Pavlich’s four cohosts challenged her.

Tantaros suggested it’s the culture. “You know, the music industry, entertainment, it’s like the air you breathe is liberalism, so it’s so hard, I guess, not to.”

Cohost Kennedy went back to bashing academia. “It’s like the ills of socialism and communism are not properly taught,” she complained, suggesting that that was enough to color students’ entire political views. Kennedy claimed academics, “by and large” have “never existed in the real world.” As if being a VJ and television pundit is more “real world” than working with students.

Let’s see: millennials, academia, teachers, public education, the music industry, the entertainment industry… there’s no way to watch this and not conclude that these Fox News talking heads hate America.

Watch it below, from the February 16 Outnumbered.

And I’m willing to bet the house that NOT A SINGLE ONE of Pavlich or Andrea “Punch” Tantaros’s ancestors put THEIR a**es on the line for America in Vietnam. In fact, I’ll bet that they’re all loudmouthed PFCs (Privileged Fascist Chickenhawks) just like Pavlich and Tantaros.

Jane S commented 2016-02-17 01:55:17 -0500 · Flag
Pavlich is one of those noisy right-wingers who genuinely gives me the creeps, like that Milwaukee sheriff David Clarke. the hatred is just so off the charts.

Somebody like Guilfoyle is an actress who doesn’t much care unless you pay her a salary. Hannity is flat-out deluded— and nowhere near as hate-filled as Pavlich.

The resulting straw man gets thoroughly beaten. Being made solely of bulls—t held together by bubble gum the straw man is incapable of fighting back. If only the Wizard of Oz was around to bestow him with a brain! 😉

So there’s the stereotype of our liberal education system. There’s the stereotype millennials are a bunch of liberals. Bingo! They’re obviously brainwashed drones. How could I have ever missed it? We’ve got a slam dunk argument. Or did I just witness the ball bouncing off the rim?

I find it interest said shill expects young people to turn Republican after they get a real Jo to support themselves and start paying taxes.

Scientific studies have shown the difference between liberals and conservatives is the latter lack empathy. So certainly the selfish predisposed to being swayed by greed over altruism may quickly shed idealism. However, many remain liberal for a lifetime.

Some like myself grow more liberal over time as I shed my insulated suburban childhood roots by traveling overseas and working in public service including a stint in a federal anti-poverty program.

marco commented 2016-02-16 15:44:18 -0500 · Flag
Maybe it’s because we’ve come out of two more wars. Maybe it’s because millenials are more ethnically and racially diverse. Maybe it’s that studies show Democrats to be more educated. And maybe it’s because today’s generation cares about the world and others. http://www.people-press.org/2015/04/07/a-deep-dive-into-party-affiliation/