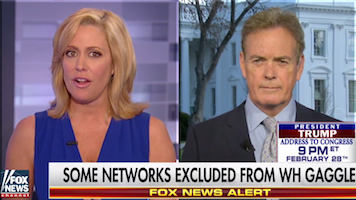 Today, major news outlets were blacklisted from Press Secretary Sean Spicer’s press gaggle. But the pro-Trump press was allowed in. Yet Fox News’ Chief White House Correspondent, John Roberts, only wanted to report what Spicer said about the exclusion. Neither Roberts nor anchor Melissa Francis revealed which press got in and which got shut out.

Media Matters has the backstory:

Hours after President Donald Trump denounced critical journalists as “the enemy of the people” before a cheering crowd of supporters, major news outlets were blacklisted from a White House press gaggle while the administration’s sycophants were ushered in.

“CNN was not permitted to attend, along with the New York Times, Politico, Buzzfeed and much of the foreign press that regularly attends White House briefings,” CNN reported. Instead, White House press secretary Sean Spicer found room for the pro-Trump outlets Breitbart.com, The Washington Times, and One America News Network.

The restrictions mark the return of the Trump campaign’s strategy of revoking reporters’ press credentials and denying them access to events following unfavorable coverage of the now-president.

On America’s News HQ today, Roberts repeatedly dodged Francis’ questions about the press exclusions. “Some networks being excluded today from the gaggle. Others were invited but declined,” Francis said in her introduction. “It’s all anybody’s talking about.”

Well, it wasn’t what Roberts was talking about. Francis said to him, “There’s conflicting stuff floating around online. You’re actually there. Tell us what’s going on.”

“Who’s allowed to be in there and are certain news operations being kept on the sidelines intentionally?” Francis asked.

Roberts clearly did not want to say. In fact, he never even revealed who got blocked. He sounded more like a walking Trump press release than a reporter:

ROBERTS: Well, I could tell you that they did not have an on-camera briefing today, in the Brady Briefing Room, as they normally do, which typically would see upwards of 70, maybe even 80 people in there, kind of jammed to the rafters.

Sean Spicer was asked about it after one network started running a headline that it was excluded from this gaggle. Spicer said that they had a number of requests, there were only so many requests that they could accommodate because there was only so much room. As to their actual motivation – uh, whether it was just a room thing or maybe it was something else, I can’t say at this point because Spicer did not give us that information. I mean, I could speculate but that would only be speculation on my part.

Or you could do some, you know, digging? Surely Roberts has got lots of contacts in the Trump administration and with other reporters.

However, Francis was satisfied with Roberts’ “I’ll only report what Spicer tells me” answer. She chirped, “There you go. I’m glad we have someone there who’s seeing what’s going on and can tell us first hand because that’s what matters these days.”

By the way, to his credit, Bret Baier tweeted that the gaggle should be open to all credentialed organizations:

Some at CNN & NYT stood w/FOX News when the Obama admin attacked us & tried 2 exclude us-a WH gaggle should be open to all credentialed orgs https://t.co/8Vjcs0KCPR

Miguel de Geronimo commented 2017-02-25 11:47:10 -0500 · Flag
LBJ led the press corps around like a dictator that Trump isn’t. (..isn’t smart enough to be.)
The Washington press corps consists of career climbers that regurgitate what the White House says, and make shit tons of money.
The news heros are off in places like NewsHounds, Greg Palast, Michael Kirk, well, the list is long, and news criticism is at the heart of an important segment of actually delivering truth to power news.
The indignation of accusations of being “fake news” by and of the right to the left, is essentially true. Punditry, propaganda, and fallacy spin occupy much of what you see on CNN to Fox. (Think fairness doctrine long gone.) Add that critical thinking/reason/logic/scientific method is not at the heart of much of national TV news.
Mass propaganda has been a subject of study formally since high school. I am about the only Radio/TV B.A. with a long list of psychology credits, including social psychology. (Idaho’s broadcast side was badass – Ron Powers gurus, public broadcasting hard news powerhouses, now gone. Do not confuse with 1980’s Palin school of communications. She graduated in "mass communications, not “journalism”. Idaho’s print journalism side back in the ’70’s was really good, but politics eventually milktoasted the whole thing. Another story, and a Larry Craig sidebar.)
Ultimately, acute application of critical thinking takes apart Fox. It is based on fallacy propaganda to a great degree, but as (also) a former educator, know how small a percentage of this population masters and applies reason instead of nonstop fallacy. This isn’t just about what people say, but how they think.
-
Idaho produced Sarah Palin and Dirk Kempthorne. It also produced FRONTLINE Michael Kirk, and was lucky to have Joyce Campbell and Art Hook as professors on the excellent broadcast side of things. Pre-NPR was fantastic. 24 hour stream of Associated Press and no ratings fluff b.s. Guess what? PBS and NPR are well-compromised, too.
El84

Eyes On Fox commented 2017-02-25 10:13:42 -0500 · Flag
I heard a Fox reporter was more open on Shep’s show. That said, the mainstream media GOPTV™ and its fanboys hate should band together and boycott #OrangeHitler media events. That includes Der Furor pep rallies.

David Lindsay commented 2017-02-25 09:32:34 -0500 · Flag
John Roberts at one time in his career was being considered as a replacement for Dan Rather. Now he’s White House Chief Correspondent for Faux. And being a shill doing it. Dan Rather is still remaining vigorous and active. Maybe why John did not replace Dan.

doors17 commented 2017-02-24 19:37:10 -0500 · Flag
I think Trump is only playing this game of a fake media because he fears them discovering what the truth may lead on the Russia story, or any future stories where the media acts as a watchdog and he can give supporters and the Fox News and right wing talk radio media an excuse to ignore the facts. And they will, just as many on his side really do believe he would have won the popular vote if the 3 to 5 million illegals didn’t vote for Hillary.

truman commented 2017-02-24 18:31:18 -0500 · Flag
Roberts must love his Fux Noise gig at the Mango Mussolini White House. Report whatever drivel that Spicey dishes out that day and then head to the bar for happy hour.

Which really makes me wonder what Shep has on them over at Fox.