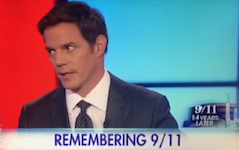 Just before the 9/11 ceremony at the Pentagon was about to begin, Fox News anchor Bill Hemmer said, “It’s not a time for politics.” Then he began prodding colleague Dana Perino to criticize President Obama for not being there.

Immediately after calling this “not a time for politics,” Hemmer continued by saying to Perino, ”Pick up on what Jennifer [Griffin, a Fox News reporter] just said. The president has gone to the Pentagon every year except for this year.”

Did Fox even bother to ask the White House why Obama was not attending the ceremony?

Hemmer interrupted. “What would explain that absence?” he asked accusingly.

Perino took the hint. “I wish that he would have gone, I guess. I know that he did the moment of silence and that was a beautiful moment with Michelle Obama, the First Lady.”

Later, after talking about the opening of the 9/11 Memorial at the Pentagon, Perino said, “I believe that these ceremonies are important. I think that ‘never forget’ should actually mean something.”

Rather than halt the discussion and air the Pentagon ceremony, the studio conversation continued as a wreath was presented by Defense Secretary Ashton Carter.

“One moment here,” Hemmer said later, in a hushed voice, as Taps was played. But as soon as Taps was finished, instead of staying with that ceremony that was so important for Obama to attend, Fox went back to Hemmer for more president bashing.

“I don’t want to push this point too far,” Hemmer began. Just like it was not a time for politics. “But it was a moving moment when the President and the First Lady came out on the front lawn at 8:45 am and appropriately so and the White House says he will be at Fort Meade later to deliver an address at that point also. The Pentagon is a five-minute drive from the White House. Why not, as commander-in-chief, make it a moment, as it has been on this day, at this time, every year since 2009 and before?”

Perino snarked. “Well it’s not an anniversary that sneaks up on you,” she said. “You know that it’s coming and you can plan for it and I’ll let the White House speak for itself on still why they decided not to be there.”

Hemmer paused the discussion again so we could listen to The Star Spangled Banner. When the national anthem was over, Hemmer and Perino began talking again, this time about Perino being in San Diego, California on September 11, 2001.

So the channel that criticizes Obama for not being at the Pentagon ceremony didn’t want to show the ceremony in full, itself.

Watch the hypocrisy below, from the September 11 America's Newsroom.

scooter commented 2015-09-11 16:05:16 -0400 · Flag
It is difficult to remain civil when speaking of FOX, but today I will. Suffice to say that their brand of patriotism is not one that I, or millions of other Americans agree with. Their rhetoric is fascist in nature and form. They are the poster children of everything that is wrong with this country.

May God have mercy on their souls.