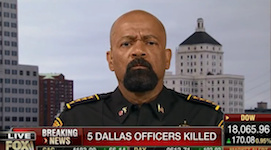 Fox News and Fox Business couldn’t seem to get enough of race-baiting, violence-loving Sheriff David Clarke to politicize the tragic ambush of police officers in Dallas, Texas. The day’s not over and we have already found Clarke making four appearances on the Fox networks. UPDATED

On FOX & Friends, Clarke suggested President Obama was responsible for the tragedy in Texas: “President Obama uses his words irresponsibly and it fuels anger towards police in this country,” Clarke said.

Clarke also got in praise for Donald Trump, saying, “No candidate has stood behind and beside the American law enforcement officer like Donald Trump.”

On his first FBN appearance today, with Maria Bartiromo, Clarke again blamed Obama for the deaths of the Dallas police officers. “Obama is using irresponsible rhetoric that fuels rage and anger that is already bubbling,” Clarke accused.

Clarke would return to FBN to attack Obama again. Elizabeth MacDonald, substitute host on Varney & Co., asked Clarke for his thoughts on the Dallas tragedy and it only took seconds for the Obama-attacking to start.

CLARKE: I’m still waiting for the Cop-Hater-In-Chief, Barack Obama, to address that issue of the statement that is coming out as to why this guy did this. He wanted to kill white people.

When Dylan Roof attacked and killed black people in a church, a heinous crime, he was all over that. He even went down to that church and he talked from the pulpit. Let's see if he attends any of these Dallas-area funerals.

MacDonald seems obsessed with the fact that Obama mentioned guns when speaking about Dallas. I previously posted about how she ignored everything else Obama said when she discussed Dallas with Allen West. Just about every guest she had on was asked about that and Clarke was no exception.

CLARKE: He politicizes everything. He never wastes an opportunity to take a political cheap shot and that’s what that is. It’s been part of his agenda.

That’s pretty ironic given that Clarke never seems to show up on Fox without taking political cheap shots at Obama and liberals. In fact, it wasn’t long before he took another one.

CLARKE: I’m getting tired of the mixed messages this guy has been sending for the last seven years. On one hand, just yesterday, he spewed some inflammatory rhetoric. Fanning the flames of this anti-cop hate that’s sweeping the country under the name of "Black Lives Matter.”

Then came the cheapest and most disgusting shot yet.

CLARKE: All we heard from him this morning is, do the obligatory thing. He had to say something about the police and he talks about how great our police are and my heart and prayers. He doesn’t mean a word of that.

The comment that Obama does not care about police, of course, went unchallenged by MacDonald.

Update: Clarke returned to FBN for a fourth Fox appearance today. So far.

UPDATE: Clarke was on The Kelly File tonight, too. That makes a total of five Fox appearances today.

You, being a law enforcement officer, should rethink your appearances on this scandalous network. We are sure you don’t want your name connected with Ailes.

Antoinette commented 2016-07-09 13:50:21 -0400 · Flag
The sheriff spends more time on television than serving the residents of Milwaukee. It’s time to remove this man from his position, and replace him with another sheriff who is more concerned with his community than appearing on television.

You are paid to do your job! Not to appear on television.

Remove this self-serving man and replace him with another sheriff.

John McKee commented 2016-07-08 22:08:49 -0400 · Flag
Is it just money that motivates this type of pond scum? Is it a rapacious hunger for fame? A touch of self-loathing perhaps? Whatever, I hope he lives to regret his appalling behaviour for many long, lonely years.

Eyes On Fox commented 2016-07-08 20:39:24 -0400 · Flag
The good news, I suppose, is I’m getting the feeling Fox’s #BlackLivesMatter obsession is distracting them from the greater prize of derailing Hillary’s bid for President. Fair and balanced.