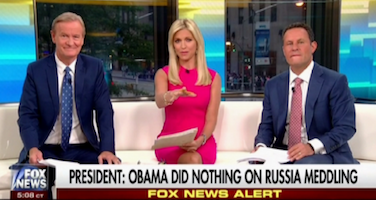 Fox & Friends ignored the gift to Vladimir Putin that Donald Trump offered up during his press conference in Poland today. Instead cohost Ainsley Earhardt argued that Trump's attacks on American media make him "the kind of guy you're going to want" going up against North Korea and Putin.

We can just imagine the Fox & Friends poutrage we’d have seen this morning if President Barack Obama attacked Fox News, our intelligence agencies and former President George W. Bush on foreign soil. But since it was Dear Leader Donald Trump attacking CNN, MSNBC, the intelligence community and Obama, it was all part of presidential Awesomeness!

During his press conference in Poland, Trump made childish, vindictive and narcissistic comments when asked about his Tweeted gif showing him “wrestling” CNN:

TRUMP: I think what CNN did was unfortunate for them. As you know, they have some pretty serious problems. They have been fake news for a long time. They have been covering me in a very, very dishonest way.

NBC is equally as bad, despite the fact that I made ‘em a fortune with The Apprentice, but they forgot that.

I’m old enough to remember when Fox accused Obama of not loving America. But with Trump in the White House, it's America's fault! After Trump attacked two large American media companies on foreign soil, cohost Ainsley Earhardt scolded the reporter for asking the question.

EARHARDT: It’s interesting, after a 15 minute press conference, the reporter stands up, and the first question is about North Korea and he coupled that with that CNN question about the wrestling video. It’s like, come on, can we talk about the issues?

On Fox, “talking about the issues” means praising Trump more substantively. So Kilmeade jumped in to argue that the Tweet was no reflection on Trump’s Awesome Things-That-Matter Awesomeness.

KILMEADE: I know you guys have thought about this, but hopefully people at home have put this together. I know the president comes out and he puts out these videos and people think, “that’s unpresidential” or “this is not right” or “this is different, why is he tweeting that?” But in the big picture, when things matter, when it comes to international security and world war, like North Korea, when it comes to relations with Russia, when it comes to the Middle East and Syria and ISIS, he is cool and calculated like a 40-year diplomatic veteran. Look at North Korea. We might have to take some very tough action against North Korea. He isn’t saying, “This little clown has no right doing this, he was given”—he’s being very cool and calculated and very—and parses his speech because he knows the impact. [Transcript excerpt via Media Matters]

But that wasn’t quite enough Trump Awesomeness for Earhardt. She suggested that Trump’s Tweets were an integral part of Dear Leader’s Magnificence:

EARHARDT: Well, the very reason that the left doesn’t like him is because he’s not going to be intimidated. He will put these videos out there to say this is fake news. Yet, that’s the kind of guy that you’re going to want to represent the United States of America when he does have to come up against North Korea, when he does have to have talks tomorrow with [Russian President Vladimir] Putin. [Transcript excerpt via Media Matters]

Then cohost Steve Doocy played the clip that contained Trump's gift to Putin. It was in response to NBC’s Hallie Jackson asking Trump if he would “definitively say that Russia interfered in the 2016 election.”

Trump’s answer was mind boggling. First, he equivocated, saying he thinks it was Russia but “it could have been” other countries, which undoubtedly pleased Putin at the same time that it undercut our own intelligence agencies. Trump also falsely claimed Obama “did nothing” about the Russia interference - which Trump had just refused to definitively acknowledge.

So how did the Curvy Couch Cheerleaders respond? First, by showing a large banner that said, “THE MEDIA’S RUSSIAN OBSESSION.” 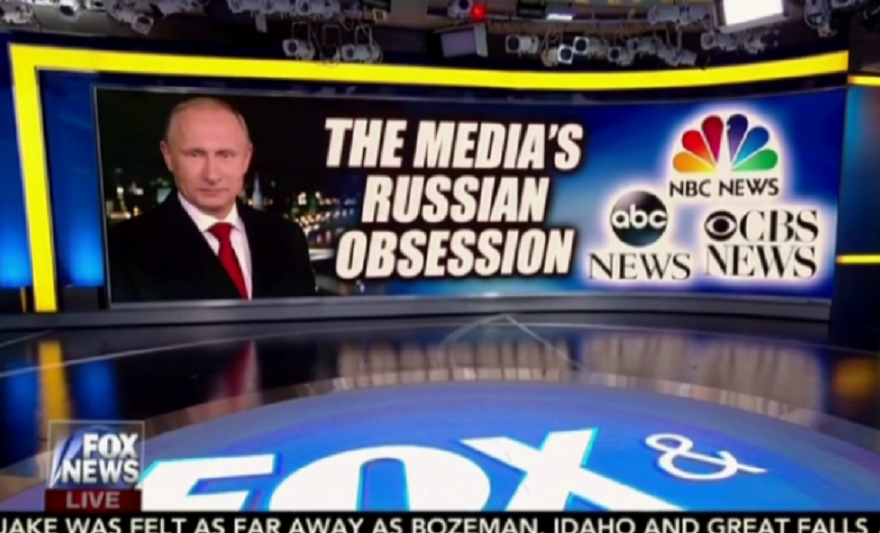 Then cohost Doocy said contemptuously that Jackson had tried to ask a third question, despite the rules only allowing two. “Time ran out,” he sneered.

Then Doocy changed the subject.

Watch Fox News sell out the United States in favor of Trump below, from the July 6, 2017 Fox & Friends.

On Independence Day, Drump wandered away from the presidential limousine that was parked directly in front of him when he deplaned from AF1:

And, today in Poland, wandered off AGAIN at the conclusion of his remarks, standing away from the bulletproof barrier where the podium was:

Yeah — that’s EXACTLY who I want dealing with two hostile, potentially nuclear-armed states: somebody who wanders off aimlessly . . .

truman commented 2017-07-06 15:02:04 -0400 · Flag
Their Orange Orangutan is way overmatched against heavyweights like manly man Putin, the Chinese and the North Koreans. He is much more at home matching wits with Meatloaf, Dennis Rodman and Gary Busey.