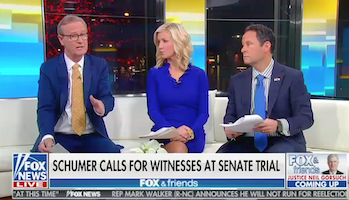 What a coincidence that two days after Donald Trump attacked the legitimacy of a Fox News poll showing 54% of Americans support impeachment, Fox host Steve Doocy used the same bogus argument to side squarely with Trump over his own employer.

As I posted on Sunday, the most recent Fox News poll found a slight increase (though well within the margin of error) in support for Donald Trump’s impeachment. There was plenty of other bad news for Trump in the poll, too, such as 53% believe he abused the power of his office.

Naturally, the Crybaby in Chief had a tantrum. “@foxnewPolls, always inaccurate, are heavily weighted toward Dems,” Trump tweeted.

But given a chance to defend his employer over Trump - and give viewers the truth - lickspittle Doocy chose Trump. It started with Doocy smirking as he announced that “polls have turned south for the Democrats regarding impeachment.”

Cohost Brian Kilmeade interrupted to say, “Not in our poll. Our poll says 50% want it.”

Actually, Bri, your poll found 54% want impeachment. 50% want Trump impeached and removed from office; 4% want him impeached but not removed. Kilmeade went on to say that other polls found, “it’s changing a little bit.”

Regardless, Doocy went on the attack against his own network’s polls, with criticism that could have been scripted by Trump:

DOOCY: If you do look in our poll and you examine the people who responded to it -- because they talked to a thousand registered voters. I think something like 7, 8, 9% more Democrats, more people are going to be voting in the Democratic primary than in the Republican primary. So perhaps that speaks to the demographic.

Yeah, and perhaps cows can dance the bossa nova. The point is, if Doocy really wanted to understand the reasoning behind the polling sample, he would have asked a pollster. Or he could have done a simple Google search and found out that more Americans identify as Democrats than as Republicans.

But then those facts might have upset Dear Leader and/or his cult.

Not surprisingly, nobody else seemed to think it worth finding out if there was really a problem. So Doocy went on, adding, “Yeah, you look at the focus group up in Saginaw, Michigan. People are steamed that the Democrats are going through with this.”

FACT CHECK: That focus group in Saginaw was made up of all Republicans, most of whom voted for Trump.

Watch the toadies gaslight their viewers below, from the December 17, 2019 Fox & Friends, via Media Matters.