The Military Times reported that the Department of Defense will expand an existing program, Military Accessions Vital to National Interest (MAVNI), to allow recruiters “to target foreign nationals with high-demand skills, mostly rare foreign language expertise or specialized health care training.” The program “is capped at 1,500 recruits per year. Officials say it’s unclear how many of those might be unlawful DACA status immigrants as opposed to others who are also eligible for military service under MAVNI, including those with legal, nonpermanent visas such as students or tourists.”

The Times noted that “the military recruits about 5,000 noncitizens each year, nearly all of them permanent U.S. residents, or so-called ‘green card’ holders. Starting in 2006, DoD began accepting some foreigners with nonpermanent visas, such as students or tourists, if they had special skills that are highly valued. After entering military service, foreigners are eligible for expedited U.S. citizenship. Since 2001, more than 92,000 foreign-born service members have become citizens while serving in uniform.”

West does not just disapprove, he took to his Facebook page to tell his followers, “This is an illegal order and should not be followed by our Military.” 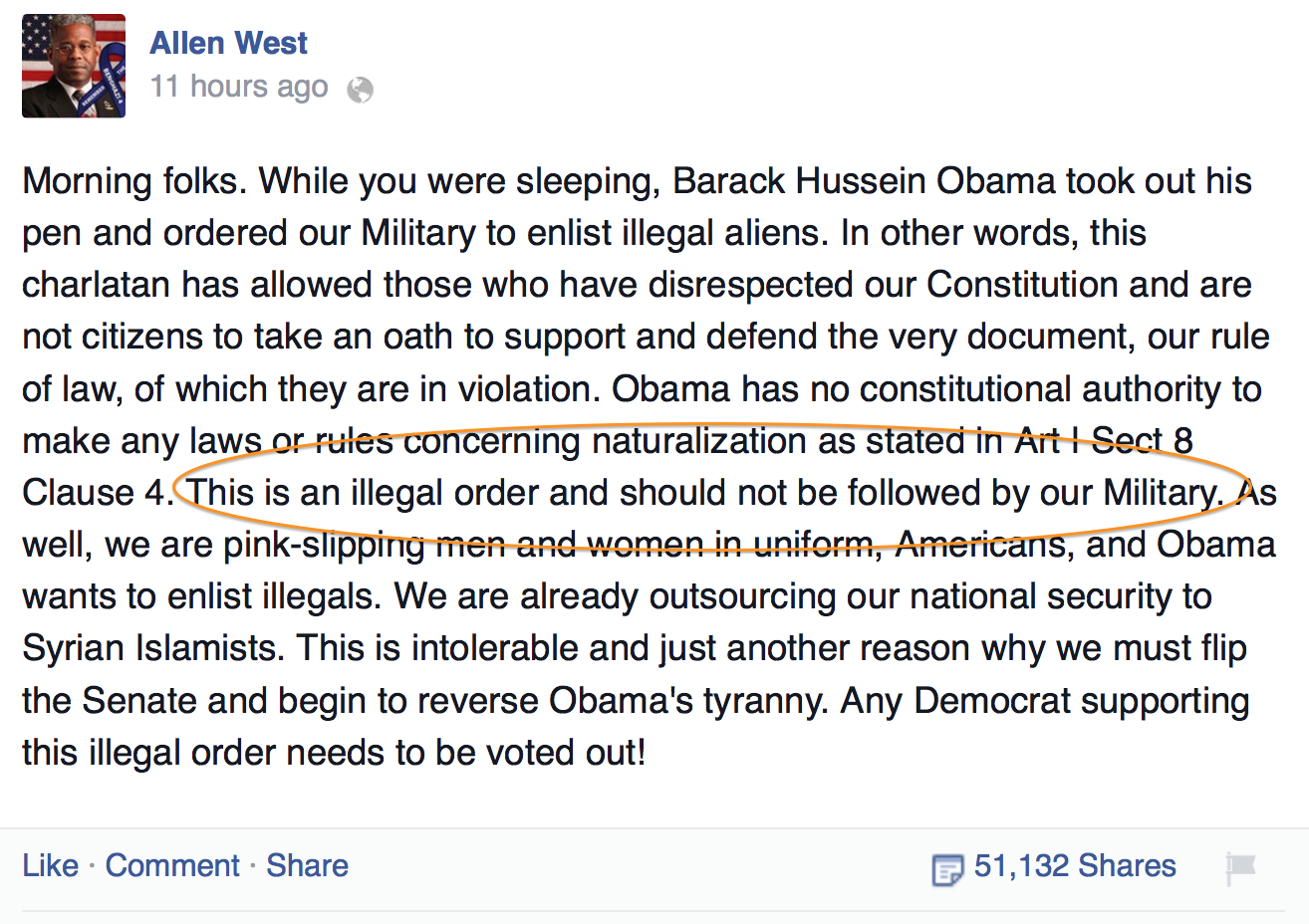 West is really in no position to be handing out such instructions. This is a guy whose mistreatment of an Iraqi prisoner nearly got him court martialed. He paid a $5,000 fine and agreed to retire and instead. As The New York Times reported, “Colonel West deliberately disregarded Army rules and regulations, gambling—and eventually losing—a successful 22-year military career that seemed destined for further advancement.”

Lucky too, that West caught the attention of Slanthead Hannity, who eagerly embraces any black person who attacks Obama.

Hannity regularly invites West, as well as “Dr.” Carson, to fill in for him when he takes days off from his hate-filled radio slime fest.

IYAM, he’s totally irrelevant with it — and my skin’s as dark as his.

Ralph Peters, Allen West, Oliver North — there seems to be something about obtaining the rank of light colonel that turns some people into rightwingnut talking heads (and, in the case of the latter two, criminals.) Perhaps putting on that silver oak leaf insignia activated some deep mind-control programming, like the Queen of Diamonds playing card in Condon’s The Manchurian Candidate . . .

Erich Pomfret commented 2014-09-27 13:06:46 -0400 · Flag
One-term Congressman Allen West is delusional most of the time. When his FL district came to its senses and threw him out, he claimed fraud, demanded investigations and recounts, but ultimately lost by an even greater margin than in the original vote. Lucky for him, Fox was there to give him a sympathetic ear and a paycheck.