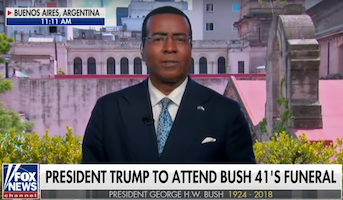 On this morning's Fox & Friends, Corke read a statement from White House Press Secretary Sarah Huckabee Sanders saying that Trump was scheduled to speak with George W. Bush and offer condolences from himself, Melania and the country. The statement also announced a state funeral “with all of the accompanying support and honors,” a designation of December 5th as a national day of mourning, and that Trump and Melania will attend the funeral.

“While we have a moment, I want to share a tweet that the president also put out,” Corke continued. Then he read this tweet that was clearly not written by Trump:

President George H.W. Bush led a long, successful and beautiful life. Whenever I was with him I saw his absolute joy for life and true pride in his family. His accomplishments were great from beginning to end. He was a truly wonderful man and will be missed by all!

But here’s what Corke decided not to tell viewers, and thus cover up, during this report described as “breaking news” by Fox & Friends cohost Ed Henry: Trump has a long history of attacking and demeaning George H.W. Bush and his family. ABC News properly put the statement in context:

Trump’s statement honoring Bush acknowledged his “thousand points of light” mantra, which was intended to recognize the service of volunteer organizations across the country. Yet, in July, Trump had mocked the phrase in a campaign rally.

But Corke’s whitewashing served the Trump comms team in another way, too. It helped legitimize Trump’s later claim in both tweets and in comments to reporters that he had canceled his scheduled G-20 press conference because of his deep respect for Bush and his family (and totally not out of fear of embarrassing questions about Michael Cohen or Russia).

Trump told reporters that he had canceled the press conference “out of respect” for Bush and that the death of such a “wonderful man” put “a damper” on the summit. But when asked by a reporter, “Do you regret any of your comments about the Bush family in the past?” Trump refused to walk any of them back in any way. He merely said, “Thank you very much.”

Fox News titled its video of those comments, “Trump: George H.W. Bush was a wonderful man.” Its description read, “President Trump extends his condolences to the Bush family following the death of former President George H.W. Bush, says out of respect he is postponing his planned G20 press conference.”

Watch the propaganda below, from Fox’s December 1, 2018 reporting. Underneath, ABC does it right.

Rw Fan commented 2018-12-02 09:47:59 -0500 · Flag
It’s simply amazing Trump has reached a point, when a former president dies, the White House needs to come out with a statement saying the president and first lady will attend the funeral. Like this was even debatable in the past? Bush was too classy to ban Trump from his funeral, but I hope at least they don’t let him speak. Just sit there and watch how real presidents behave,

Even if it rains?