Fox Reportedly Worried About Lawsuits After Misleading Viewers About COVID-19 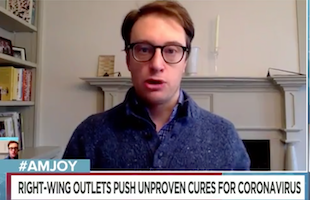 Fox News insiders are worried that someone might sue the network if a viewer falls ill or dies as a result of its dangerous downplaying of the threat of the coronavirus, reporter Gabe Sherman said today.

Sherman discussed Fox’s shifting coronavirus coverage on MSNBC's AM Joy today. As Crooks and Liars noted, Sherman broke some news during the discussion (full disclosure, I'm a contributor at C&L):

SHERMAN: When I've been talking to Fox insiders over the last few days, there's a real concern inside the network that their early downplaying of the coronavirus actually exposes Fox News to potential legal action by viewers who maybe were misled and actually have died from this. I've heard that Trish Regan's being taken off the air is, you know, reflective of this concern that Fox News is in big trouble by downplaying this virus and The New York Times reported days ago that the Murdoch family was privately taking the coronavirus seriously. The Murdochs, of course, own Fox News. So, they were taking personal steps to protect themselves while anchors like Trish Regan and Sean Hannity were telling viewers that it's a hoax and putting themselves potentially in mortal danger. So I think this is a case where Fox's coverage, if it actually winds up being proved that people died because of it, this is a new terrain in terms of Fox being possibly held liable for their actions.

Now, that would be the perfect just desserts for the folks who delight in conservatives suing media outlets. In fact, none other than Rep. Devin Nunes, who seems to spend every waking minute suing media outlets, told Fox viewers “it’s a great time” to “go out” to “a local restaurant” and that “you can get in easily.” That same day, infectious disease specialist Dr. Anthony Fauci spoke, on Fox News, about the need for “rather stringent mitigation and containment.” But Fox host Maria Bartiromo agreed with Nunes.

Two days earlier, Fox & Friends cohost Ainsley Earhardt told viewers, “It's actually the safest time to fly. … terminals are pretty much dead. … remember back in the day when you had a seat next to you, possibly empty, you could stretch out a little more? It's like that on every flight now.”

On March 8, the Murdoch family called off his 89th birthday party scheduled for March 11, out of concern for the pandemic.

But now that Fox has acknowledged the threat of COVID-19, it has pivoted again and is now suggesting viewers should be willing to risk their lives anyway, for the sake of the economy.

Oh, and Fox is also pushing unproven treatments for coronavirus, too.

Eyes On Fox commented 2020-03-30 11:49:20 -0400 · Flag
I’ll get back on my soapbox and state anyone, especially Trump, who pimped hydroxychloroquine as a miracle cure should be the most afraid of being sued. This has done massive harm, particularly to lupis and rheumatoid arthritis patients desperate for these drugs but can’t get them because of hoarding by idiots believing its a miracle coronavirus cure.

Here’s an amazing article on the crackpot French doctor behind the study.
https://slate.com/news-and-politics/2020/03/didier-raoult-hydroxychloroquine-plaquenil.html

All TrumpTV™ has to say in its defense is they’re just dutifully parroting Dear Leader, the official position of the United States government. That’s not to say he can’t find a few contacts within the propaganda outfit who are thinking it’s a problem to quote but I think it’s mostly a case of wishful thinking.

To defend sub-genius Ainsley Airhead… errr … Noheart… errr… Earnhart…(I personally think her ‘my friends want to have their nails done’ comment is dumber) all Faux News has to do is peruse, say, #emptyplane for some examples to illustrate the fact passengers are down, if I recall, ~91% based on TSA screenings.

If irresponsible Fox News had learned a lesson – overlooking the biggest shills of the deadly hoax ideology are still on the air – they wouldn’t recently be pushing the immoral ‘grandpa needs to risk his life for Trump’s reelection… errr… the economy narrative’. Despite many pivots keeping up with Trump’s impulses I don’t see any repentance on their part, just the opposite.

I’m not saying I defend any of their deadly bs, totally the opposite, but they’ve convinced half the nation Trump’s doing a great job on coronavirus. Anyone who can sell that lie can spin anything.

For the record, since I returned to the US, I’ve only been out twice during senior hours to go to my nearest grocery store. Fox News can kiss my butt!