Fox Regular: Democrats Should Have Been Asked, ‘Do Babies’ Lives In The Womb Matter?’ 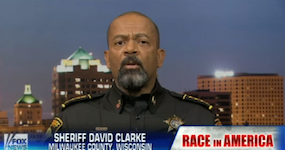 The Hannity show was one of several on Fox to use the question about #BlackLivesMatter in the Democratic debate the night before as an excuse to go after the group.

“What is so controversial about saying ‘all lives matter?’” Hannity disingenuously asked. For one thing, he ought to know why and for another, asking a guy like Clarke this question was tantamount to asking him to go on a racial attack. And Clarke complied.

CLARKE: Sean, it was a pathetic display. It was plantation politics in its finest hour. The continued enslavement of black people emotionally by the Democrat Party with this destructive liberal ideology. And they know it. They’re whoring for votes. They know that’s what they’re doing. The liberal ideology has been very destructive for the black community for the last 50 or 60 years. Poverty is now generational. It’s a lifestyle. The unemployment is obscene. They have to send their kids to failing public schools. Drug and alcohol addiction. Neighborhoods that are crumbling - all under Democrat control. They need to get off their knees and stop this stuff and take a real message to the American people, and especially the black community, that what they have done, they deserve an apology for from the Democrat Party.

Rather than object to this over-the-top rhetoric, Hannity further demonized #BlackLivesMatter. “Remember this?” he asked. Then he played a clip of a group of outlier protesters chanting “Pigs in a blanket, fry ‘em like bacon.”

Of course, Hannity “forgets” how he championed racist rancher Cliven Bundy, who threatened armed attacks on law enforcers. Hannity also has “forgotten” that he once palled around with a white supremacist.

Not surprisingly, nobody reminded Hannity. Guest Juan Williams did say, “There is a real issue of excessive use of police force in the country.”

“No, there isn’t,” Clarke interrupted. And Hannity interrupted Williams to highlight Clarke’s view.

CLARKE: It has been an economical and social disaster under this liberal ideology for black people over the last 50 years. And it started with the destruction of the family unit, the most basic unit of society that has been very successful. Tore the black family apart. It has been a nightmare.

…A better question to have asked those Democrat candidates last night would have been, “Do babies’ lives in the womb matter?”

“That would have been a good question,” Hannity agreed.

Watch it below, from the October 14 Hannity.

NewsHounds posted about Fox Regular: Democrats Should Have Been Asked, ‘Do Babies’ Lives In The Womb Matter?’ on NewsHounds' Facebook page 2015-10-15 09:00:17 -0400
Only on Fox News would this nutjob be held up as a legitimate expert.