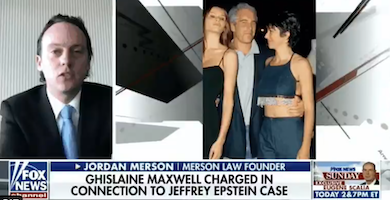 After Fox News got caught cropping Donald Trump out of a photo of accused child sexual predators Jeffrey Epstein and Ghislaine Maxwell, it has issued a statement saying, “We regret the error.”

The edited, Trump-free image was featured in a Sunday segment on Maxwell’s sex-trafficking charges and was taken at the president’s Mar-a-Lago resort in February 2000. Interestingly, while Fox cropped the president out of the image, they did not crop out his then-girlfriend/now-wife Melania Knauss Trump.

"On Sunday, July 5, a report on Ghislaine Maxwell during Fox News Channel's 'America's News HQ' mistakenly eliminated President Donald Trump from a photo alongside then Melania Knauss, Jeffrey Epstein and Maxwell," a spokesperson for the network said.

The Fox News spokesperson added, "We regret the error."

Trump's allies have played up ties between former Democratic President Bill Clinton and Epstein sometimes by sharing old photos in which both of them appear, while downplaying photos that show Trump and Epstein together. A Clinton spokesperson said in 2019 the former President knew "nothing about the terrible crimes" the convicted pedophile committed.

Below is the Fox News segment that ran the Trump-free photo, from the July 5, 2020 America’s News HQ, via Raw Story.

truman commented 2020-07-06 18:36:33 -0400 · Flag
Of course it was an error. The Fox News intern was specifically instructed to crop out Orange Donald and Melanoma and photo-shop in Bill and Hillary.

Anonymous commented 2020-07-06 17:42:52 -0400 · Flag
Because the Fox News line is that the the Dems are commies, Fox apparently thought it was OK to fight fire with fire, i.e., to use Stalinist methods (see link below). And the President has the gall to talk about “erasing history”!