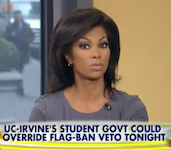 The phony patriots of Outnumbered were just outraged that students at University of California, Irvine want to ban the flag in certain places on campus. Ironically, while the five cohosts couldn’t say enough wonderful things about the flag, they also couldn’t say enough terrible things about their fellow Americans who want to use the freedom the flag supposedly represents.

According to cohost Harris Faulkner, the reason the student government wants to ban the flag from “its lobby and some other areas” is because “it could symbolize American superiority.”

“Some lawmakers are outraged by that and are now proposing a constitutional amendment that would block any college from doing that,” she said. Nobody on the panel seemed disturbed by such a possibility.

Guest Tony Sayegh, a Republican strategist and Fox News contributor, said this is something that “goes to the heart of a much larger issue.” That larger issue was how anti-American millennials are.

SAYEGH: We’ve empowered young people to really second guess their love of this country. And what really upsets me is when you look at these statistics of millennials, compared to even Gen X-ers like us. The double-digit gap between those in our generation who are proud to be Americans and those who are millennials. I mean, you’re talking about 20% difference between the two. Those who are proud to even identify as Americans. This is a much larger issue.

I’m not so concerned about idiotic students doing something idiotic. I’m concerned about a generation of people who are gonna grow up not realizing what exceptional a country they live in.

Exceptional, apparently, except for the young people. And their schools.

FAULKNER: This school is happy to take hundreds of millions of dollars in federal money: …We looked it up. …$290 million. What does that say?”

Andrea Tantaros – who has shown her “patriotism” by asking her radio show listeners to “do me a favor” and punch an Obama supporter in the face -  thought the answer was to “cut ‘em off and see how they like it.” She then mocked one of the students who said he could understand why the students wanted to ban the flag. “He can understand? Why? …You’re living in the United States of America. It’s not an inflated sense of self-importance, it’s a shrunken sense of brain cells that someone needs to clop their heads together like Mo (in the Three Stooges). Wake up!”

Yes, if only the students loved America the way Punch does!

Faulkner posted the iconic photo of some American soldiers hoisting the flag at Iwo Jima. “Think about the times that our flag has given you pause for so many awesome reasons and moments,” she said reverentially.

Cohost Kennedy said, “The great thing about it is that it stands for freedom which also protects freedom of speech. And some of these leftist weirdos… this stuff belongs at Berkley and Santa Cruz, that’s where the wingnuts are.”

She said that UC-Irvine was supposed to be a “smart, conservative” school. “What in the world is going on here?” she asked.

So, apparently, we can chalk up American liberals as not lovable, too.

Segregation apologist Ainsley Earhardt piped up. “I think this is absolutely disgraceful. ..We have men and women who are dying every day… so that those kids can do what they want to do in college? I think this is disgraceful. There are so many veterans out there that are in hospitals, that are having PTSD and they did all of that and they sacrified all of that, left their families, so that these kids could have the freedom to say that."

They’d just better not use that freedom.

Watch it below, from the March 10 Outnumbered.

- Kennedy calls left-wingers “wingnuts.” Listen, we came up with that one first, to describe right wingers!

- The Clash: “You have the right to free speech…..as long as you’re not dumb enough to actually try it.”

- Andrea Tantaros…thought the answer was to “cut ‘em off and see how they like it.” Your commitment to free speech is so impressive, Andrea.

Kyle Dorfdorfendorf commented 2015-03-12 22:14:07 -0400 · Flag
What ugly people these are on the inside.
Believe in American exceptionalism because it’s exceptional! These people need a sign around their necks warning others not to dive into them.

Aria Prescott commented 2015-03-12 21:47:29 -0400 · Flag
These are the same people who praised two photos of a baby sleeping on the flag, then found out a black woman took them, and literally began condemning these same photos as desecration in mid sentence. I’m not the least bit invested in what they have to say about topics like this anymore.

Antoinette commented 2015-03-12 20:54:13 -0400 · Flag
University of California, Irvine should ban Fox “News” from the campus. This worthless network is a disgrace to broadcast journalism.

It says two things: 1) that UCI is a state institution (all state institutions take money from the federal gov’t, even the ones in the red states), and, 2) apparently, they weren’t listening to Rush Limpballs, who once made the complaint that he was “sick and tired of hearing how we have to invest in education!” . . .